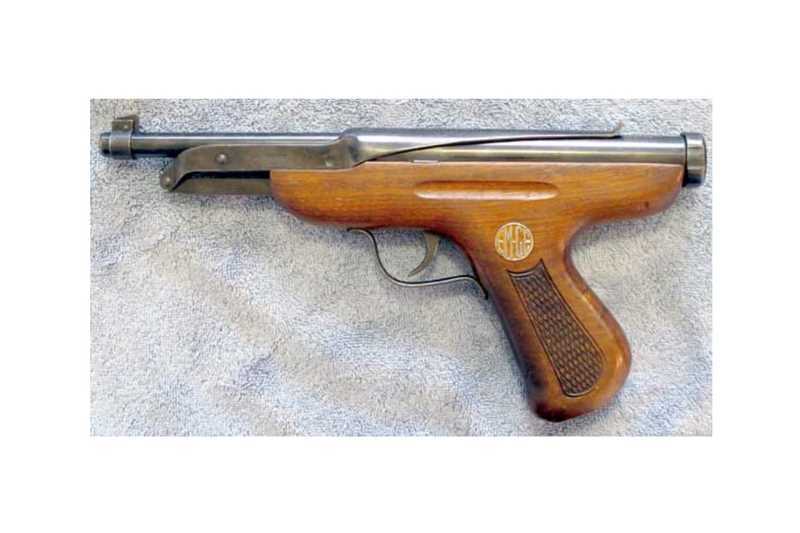 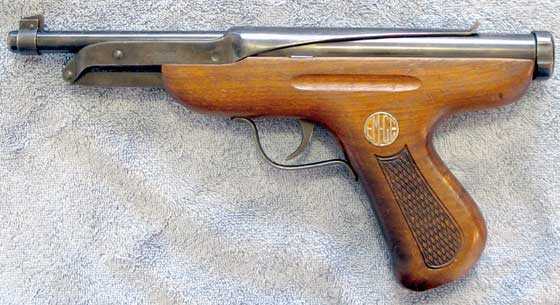 The German EM-GE Zenit air pistol from before World War II is a fascinating collector’s item.

Today we begin looking at an air pistol with a rich portfolio of design features. The EM-GE Zenit is a pistol many airgunners have never seen, though there were copies made by Milbro under the Diana name, by the German maker Falke, by Swedish maker Stiga, by Italian maker Brema and even the Russians made a copy on what was probably the original Zenit machinery and tooling after they took over the EM-GE factory at the end of the war.

The EM GE Zenit is an overlever spring-piston air pistol made by Moritz and Gerstenberger of Zella Mehlis, Germany from about 1937 until 1940. Because of the short production period, it is a relatively rare air pistol that is desired by many collectors. And it has an interesting and potentially dangerous design flaw that makes shooting it something of a gamble. I will discuss this in detail later.

The pistol is made from wood and steel. The wood is walnut and the steel is highly polished and deeply blued. The pistol I am testing for you has most of the finish remaining, though rust has set in and needs to be treated. I will treat it with Ballistol that penetrates and neutralizes the rust.

Most Zenit (German for zenith) pistols have a one-piece walnut grip. There is a round brass escutcheon with the EM-GE logo on either side of this grip.  There is also a model with Geco grip escutcheons that was made for export to the United States.

A rare version was made with a  black bakelite grip. Bakelite is the world’s first synthetic plastic. While plastic parts are usually a cost control measure, this one may have been to save resources, as Germany was gearing up for war and needed wood for many items of materiel. This version has the logo cast directly into the grip, which is possible with plastic.

The plastic grip is very rare and was made before World War II. Some may have existed as new old stock for sale after the war, but this grip is definitely a prewar item.

The pistol is cocked by lifting up on the overlever that lies on top of the spring tube and rocking it forward until the sear catches the piston. The barrel tips up when this happens and moves slightly forward, exposing the breech for loading. The leverage is odd but effective, rendering the Zenit very easy to cock for its power. 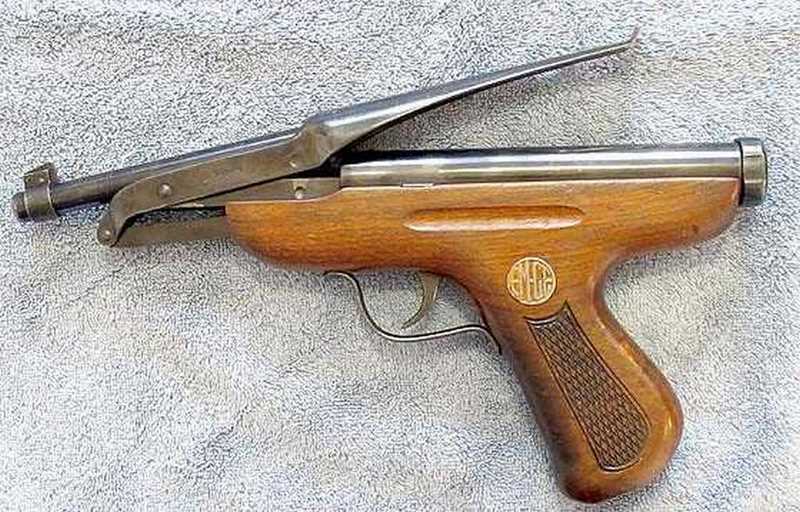 To cock the pistol, first raise the top strap that’s the cocking lever. 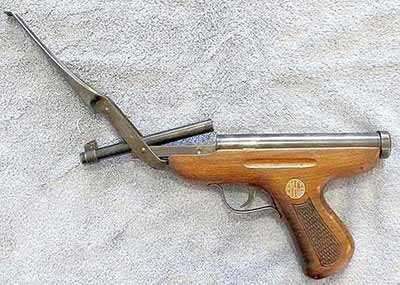 Then rock the top strap forward until the sear catches the piston.

With the top strap up the trigger cannot fire the pistol. This is an anti-beartrap on an airgun from the 1930s!

The Zenit is a single shot, loaded at the breech in the conventional way that a breakbarrel is loaded. But there is also a repeating model with a gravity-fed tubular magazine on top of the spring tube. The magazine aligns with the breech when the pistol is cocked and the barrel tips up. The pellets then slide down the magazine tube. It doesn’t sound too positive to me, but it’s so rare I will probably never get the opportunity to examine one.

The outer barrel is steel but it has a brass liner. This liner may be smoothbored or rifled. The pistol I am examining for you is rifled, as noted by the abbreviation gez. for gezogen that’s stamped into the barrel.

The barrel is marked with the caliber and also gez. — the abbreviation for gezogen or rifled. 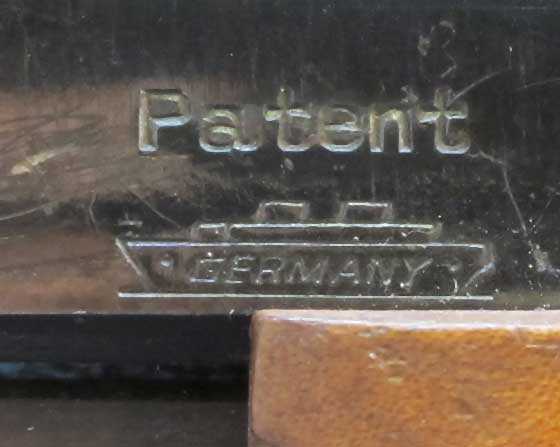 A different-looking patent mark with no patent number. 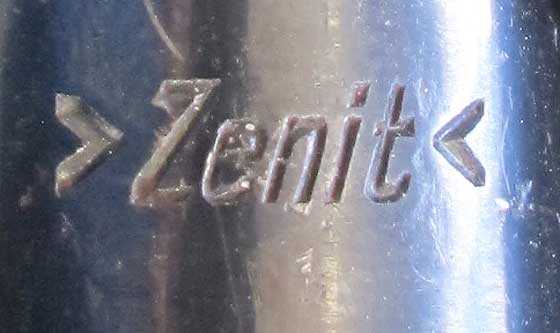 The name is Zenit.

And the name of the maker.

The rear of the overlever is bent up and has a notch that serves as the rear sight. 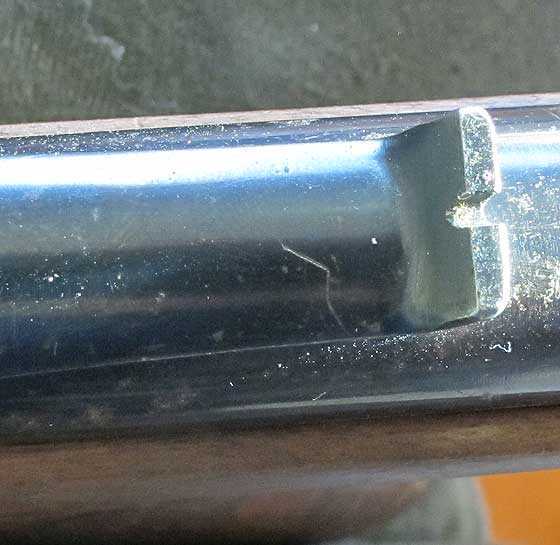 The rear sight is cut into the end of the cocking lever.

The front sight has a thumbwheel jam nut on the right side that allows the post to be raised to varying heights. The higher you go the lower the round strikes. The blade can also be moved left or right a little by rotating the sight ring, which will adjust the windage. 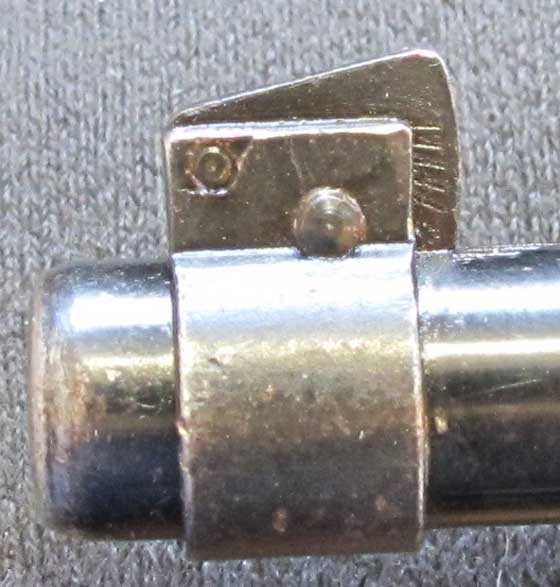 The front sight blade swings up to adjust the elevation. 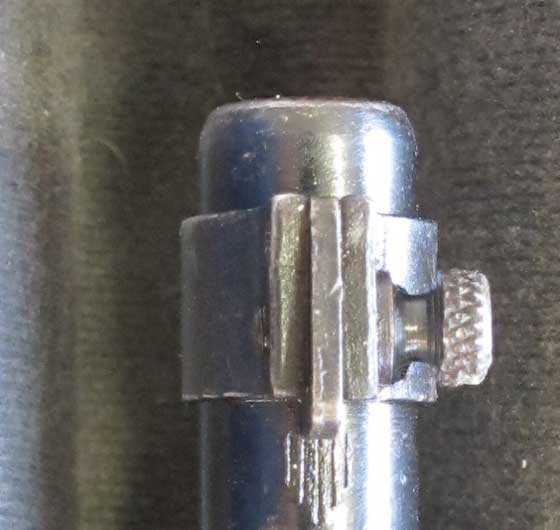 Loosen the thumbscrew and rotate the front sight ring right or left for windage adjustment.

The one design flaw is the end cap. It is threaded on the spring tube and held in place by a small hole in its bottom that accepts a protrusion from the bottom of the spring guide. If, while firing, this small protrusion jumps out of the hole in the end cap, the cap is free to unscrew and send the cap back into the shooter’s face with the force of the mainspring. 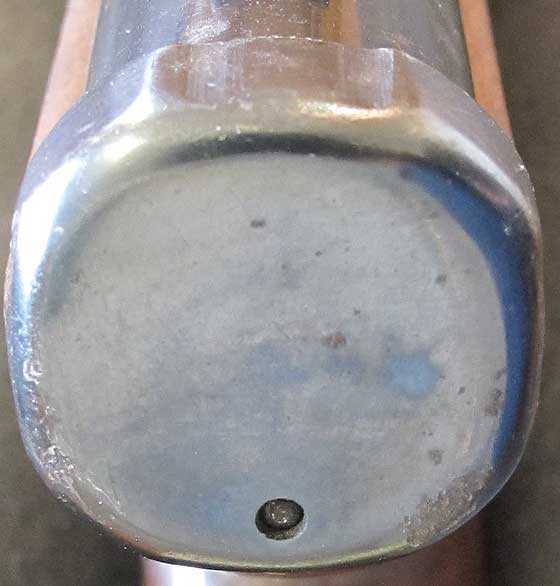 As long as you can see the stud through the end cap hole like this, the cap cannot unscrew and hit you in the face.

The trigger acts directly on the sear, which, in turn, locks the piston in the rearward position. I have tried the trigger several times and can tell you that it’s a two-stage design with a very light but positive stop at stage two. I can feel some movement in stage two, but the release is reasonably crisp. There is no provision for adjustment.

I doubt the Zenit will be a powerful air pistol. It’s probably somewhere in the higher 200 f.p.s. region with lightweight lead pellets. But for its day it was at the zenith (pun intended) of performance. It was up against air pistols such as the Haenel 26 and 28, the BSF S20, and the Diana model V. The Zenit wasn’t the most powerful, but it packed more features than any of the others into a nice compact package.

As I mentioned in the beginning, there were many copies of the Zenit, with the Russians just building the same gun on the same machinery after the wart. Milbro copied it and they came very close. Theirs lacked the rear sight on the cocking lever, as the lever was extended to the end of the pistol and folded over the end cap. That was one of several ways Milbro protected the shooter from the end cap springing back at their face. This pistol was called by numerous names including the Milbro Diana Model Mark IV, the Diana G4, the Milbro G4 (rifled) and the Milbro G4S (smoothbore). In the US this is one that you may see more often than any except the original Zenit.

We are looking at a strange and fascinating German air pistol from before World War II. This may not be a long series, but it should be an interesting one.

Velocity testing is next. What should I do?