Boy, have I see a lot of misinformation written about this firearm. Yes, the Daisy VL is a .22-caliber firearm and no, it is most definitely NOT the only .22 firearm Daisy ever made. I own a Daisy model 8 that I reported on several years ago and there was another Daisy bolt action called the Legacy that came with both a plastic and wood stock. Actually this VL was also sold with both a plastic stock and a wooden one on what Daisy reverently called a “presentation” model. That one has a brass plate for an inscription on the right side of the butt. It sold for $125 — in 1969, and it came with a fitted presentation case and a thousand rounds of ammunition!

The rifle I’m showing today is the more common VL with the plastic stock. But the price was still $39.95 retail in 1967-’69 when they were made — a time when you could buy a Winchester model 121 bolt action single shot .22 rimfire rifle for $23.95. In 1969, that $16 difference was huge! Daisy was probably trying to recoup the money they paid for the rights to the invention, but it broke the back of the VL rifle. Just 19,000 of the standard ones and 5,000 of the presentation models were made in the years before the ATF shut them down.

But here is the deal. The VL wasn’t just a single shot .22. It was also a spring-piston air rifle. Huh? 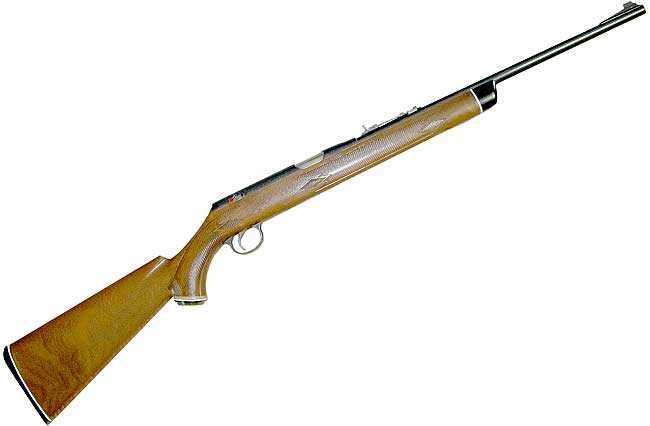 The Daisy VL rifle is simply a single-shot spring-piston rifle cocked by an underlever. Load the cartridge in the breech — exactly where a pellet would be loaded.

Want more? Well, some folks think the VL isn’t a firearm because it was made by Daisy and doesn’t have a serial number. Wrong! Mine does have a serial number. And the ATF took their sweet time deciding, but a VL is indeed a firearm and not an air rifle.  Since they didn’t have a license to manufacture firearms Daisy was advised that it would be better if they didn’t make any more, so the VL, the Legacy and the model 8, which was a Wal-Mart marketing fiasco, all went quietly away. But, just like Wamo, Daisy did make firearms. 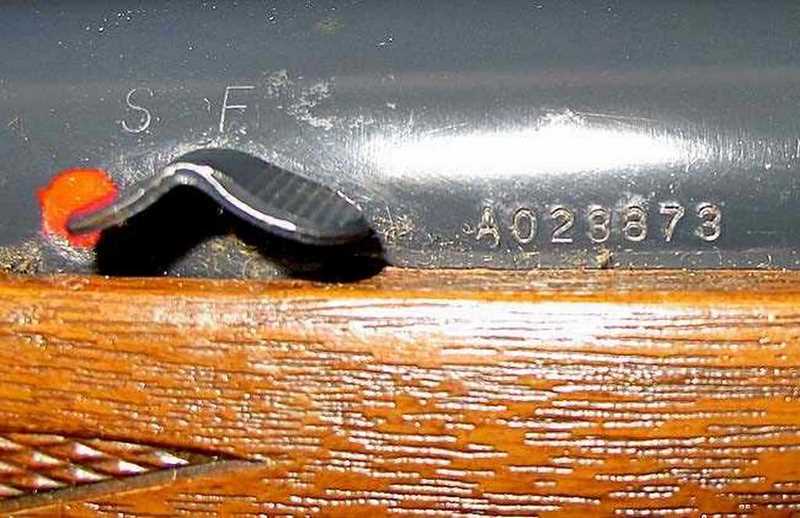 This Daisy VL does have a serial number. And the safety is automatic.

What is the VL? 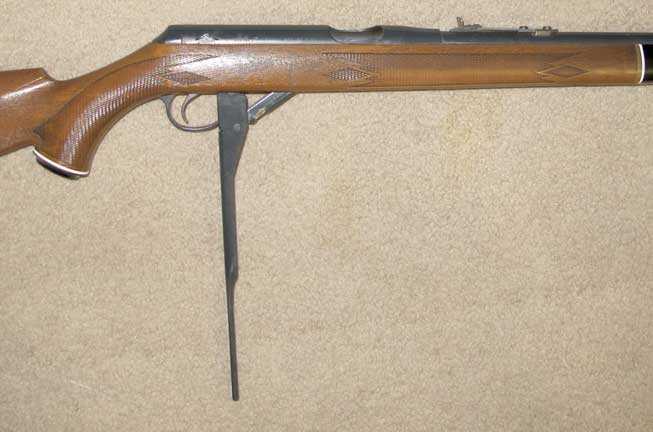 Underlever is down, sliding compression chamber is back and the sear has caught the piston. Load directly into the breech through the open loading port.

The ammunition was what made the thing work — the reason Daisy bought Van Langenhoven’s invention. It’s a lead bullet with a small cylinder of white material glued to the base. That material is the gunpowder. It’s half the length of a .22 long rifle yet the 29-grain lead bullet shoots out at 1,150 f.p.s. Daisy said the cartridge had the power of a .22 long rifle cartridge, but in truth it’s more like a high speed .22 short. Twenty-nine grains at 1150 f.p.s. is 85.18 foot-pounds — a trifle over what a high speed short produces and less than a standard speed 40-grain long rifle bullet.

The cartridges come 10 to a tube and 10 tubes to a box of 100. Theoretically it’s safe to carry tubes in your pockets, but I always worried about the powder breaking off. And I think that may have been a major concern about the whole invention — second only to Daisy’s high retail price. 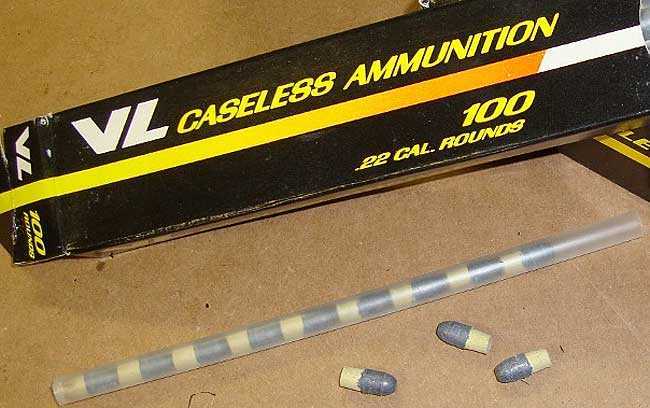 Ten VL rounds to a tube and ten tubes to a box.

It didn’t have to be bonded to the bullet, either. In fact, Van Langenhoven demonstrated his invention at first by pinching off a small bit of his special compound and putting it behind a conventional diabolo pellet in a conventional spring-piston air rifle!

The U.S. Army researched the VL concept and made it work technically. It was just as powerful, plus was shorter and lighter than 5.56mm rounds. In that respect it would have been great. Logistically, though, the ammo could not stand up under the rough handling it would get. And believe me — I know! Give a soldier an anvil and rations for a week and put him out in the desert. When you return the rations will be gone and the anvil will be broken.

Daisy went to great lengths to obfuscate what this rifle really is. Look at their technical illustration.

In fact, Daisy had to stop the expanding gas that was many times hotter and under more pressure than the charge developed by a normal spring-piston airgun. It looks complex in the drawing; in person, not so much. Let’s look at the detailed drawings and read the description of how the breech works and I think you’ll get it pretty quick. 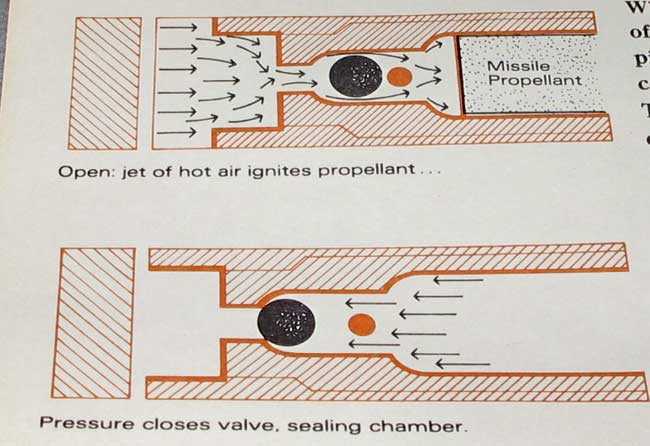 The ball in the breech seals against expanding gasses. 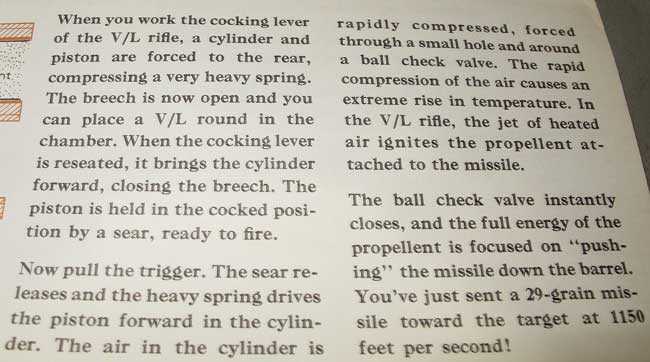 Relate this description to the drawing above to understand how the VL breech retains the pressure of the cartridge.

Pretty neat, yes? But in examining the internal parts I believe it’s safe to say you will; never see a worn out VL rifle. They look like they will be shot out before they wear out. The thin metal parts around the breech will erode from the hot gasses and eventually fail. That’s my assessment, anyhow.

Only new ones around

But here’s the deal. I’ve never seen one that didn’t look new. People bought them but they apparently didn’t shoot them much, if at all. All those I have seen were in nearly perfect shape.

And the ammo was a glut on the airgun market until recently. One-hundred dollars would buy a case of 10,000 rounds at the airgun shows I have been to. Like new in the box standard guns brought $100 if they came with some ammo. I have seen a couple presentation rifles with ammo offered for $500, but there were no takers. The prices are higher today, but they still seem to be without a great following.

Since I have the gun and a few hundred rounds of ammo, I intend testing it. This will determine several things. First — is the velocity really where they say? And second — how does the passage of time affect the ammo. I know that .22 rimfire can last for a century. How about VL cartridges?

I have  glossed over a lot of data to give you more of the history than facts about the rifle, so Part 2 may have to be a continuation of the description. The length, weight, sights, etc.

I would appreciate hearing from Daisy VL owners in the comments. What have your experiences been? Have you shot your rifle a lot? Is it accurate? Inquiring minds want to know