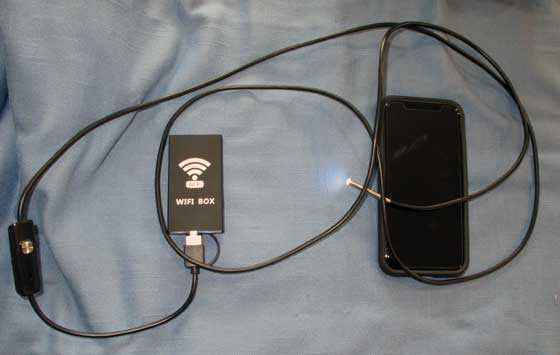 The second video is looking through the barrel of a .177 caliber Crosman Mark II pistol. It’s a BB pistol, yet you will clearly see some shallow rifling. I go from the muzzle to the breech and out into the loading trough, and then back through the barrel again. In the breech as we come back I pause and you can see two dark spots in the circle of light. They are the gas transfer ports in the breech. Let’s look.

When the Endosnake is turned on you don’t need to record what’s happening. You can see it on your smart phone as the camera moves. Only record it if you want to. You can also take still photos if you prefer.

The software shows a wide range of possible image resolutions but every time I tried to change it the software said it failed. So I left it where it was, which was very low res. Maybe when I learn the software more I will discover how to change it.

The Endosnake works with Windows 10, Android phones, Macs and iPhones. There are several photo softwares that it can work with. But the support for the product is poor, in my opinion. The “manual” is almost non-existent and you have to do a lot of searching around their website to figure things out — or at least I did.

Besides the 3.9mm Viper outfit I bought there are also cameras for 5.5mm, 7mm 8mm and 14mm. And they offer package deals with multiple cameras.

I plan to use this in future articles as well as around the house. Ever wonder what’s stuck in the garbage disposer? What other uses can you think of?