When Eliphalet Remington crafted his first rifled gun barrel in 1816 at his father's forge in upstate New York, it was the start of "America's oldest gunmaker," as Remington today still manufactures its original product. From manufacturing the first American autoloading shotgun (the Model 11) to supplying the lion's share of the ammunition used by American and allied forces during World War II, Remington Arms Company has indelibly left its mark on American history. Brought to you by Crosman, the officially licensed Remington brand airguns available today boast many of the same features as the firearms they aim to replicate. And it's a little known fact that Remington has been making air guns since 1928. They know the shooting business well! Today, Remington manufactures air rifles, pellet guns, and bb guns, which you can buy today at Pyramyd Air.

For younger shooters, we recommend the Remington 1100 Variable-Pump air rifle. This near perfect match of Remington's famous gas-operated, semi-automatic Model 1100 shotgun is smaller to fit younger shooters. This air rifle offers variable power and shoots both BBs and pellets. It has a huge, 1,000-BB reservoir so you'll always have plenty of ammo. The 1100 gives you between 300 fps and a maximum 700 fps which is better for shooting alloy pellets (12 pumps required).

This air rifle is the right size and weight for teaching younger shooters the basics of how to handle a gun safely, as well as proper safety protocols on the range or at home.

For adults and more experienced airgunners, Remington has an incredible high-powered air rifle, which comes with a 4x32 scope (removable). Another interesting fact about Remington is that when they quote the air gun velocity of their weapons, it's with the same lead pellets that you use. Most other manufactures quote air gun velocities using lighter weight alloy pellets. So make sure you compare apples to apples, because this .22 caliber gets up to 950 fps, which can take out small game and demolish cans and targets.

If you're more interested in Remington revolvers, the world-famous six-gun Model 1875 is now available as a .177 BB/Pellet CO2 revolver. If you know your gun history, you know that the original 1875 was one of the most famous guns of its time and used by both lawmen and outlaws, including the Jesse James Gang. It joins a trio of must-own Old West replicas that includes S&W's topbreak in 1872 and of course, the Colt Peacemaker.

The Remington Model 1875 is as real as a CO2 bb gun gets, with real single-action loading. In fact, you can't use a speed loader because this six-shooter is so true to its forerunner.

Pyramyd Air carries a variety of Remington air rifles, pellet guns and bb guns, so check them out today and be a part of Remington's storied history.

Showing items 1-1 of 1
Sort by: Featured 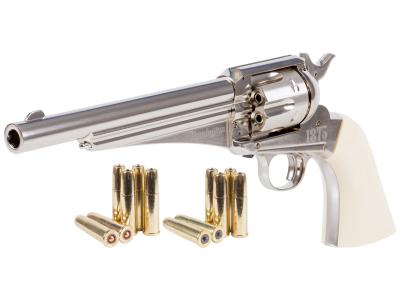