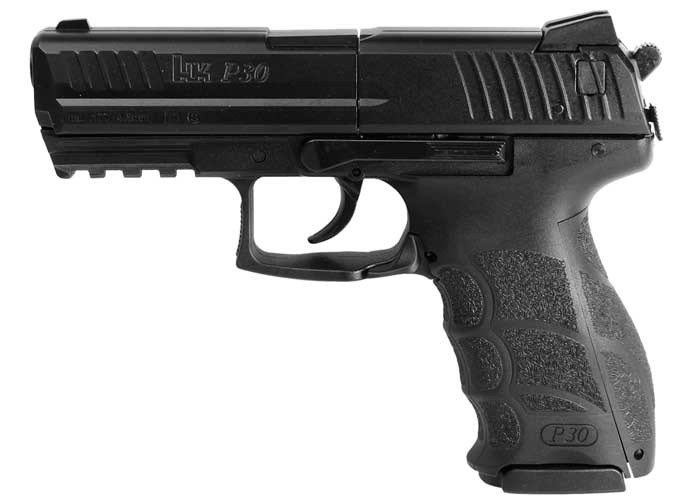 The Heckler & Koch P30 is another fine replica by Umarex that very closely resembles the actual firearm with the exception being the manual safety. Umarex is to be commended for its attention to detail in the manufacture of this pellet pistol. In addition to looking good, the gun works very well with very good accuracy. As I've done with several other pellet pistols, I shot a variety of brands and types of pellets. After a small adjustment to the rear sight, all of the shots were on target with a spread of 1 inch to 1 1/2 inches shooting single action. The gun also shoots well in double action, but the heavier double action does take some getting used to. With both Crosman and Umarex Walther CO2, I got 88 good power shots plus another 8 slightly weaker shots per CO2 charge.

I would put white dots on the front and rear sights. When I was shooting a black Shoot-n-C target, my accuracy suffered because I had trouble focusing on the front sight. After changing the target to an orange shot spot on light colored paper, both my focus and accuracy improved tremendously.

My accuracy shooting tests were done in single action mode, in a free-standing position, using a two-handed grip, at a distance to target of about 15 feet in my basement range. The pellets used were Crosman Premier Super Match wadcutter, Crosman Premier Ultra Magnum domed, Crosman Premier Super Point, RWS Meisterkugeln Rifle, RWS Meisterkugeln Pistol, RWS Superdome, RWS Superpoint, JSB Match Diabolo Light Weight, JSB Exact Diabolo domed, H&N Match Pistol, H&N Sport, H&N Spitzkugel, and H&N Field Target Trophy. All of these pellets shot well without any jams. Although Umarex generally says to not use pointed pellets, I've found that the Crosman Premier Super Point, RWS Superpoint, and H&N Spitzkugel pointed pellets fit well in the rotary magazine and shoot well. This gun does shoot stainless steel BBs, but I have not and will not use it to shoot BBs so as not to damage the rifled barrel. Overall the H&K P30 is an excellent gun for target shooting or plinking with pellets, and I highly recommend it.

the look, feel, and weight.

pretty much everything else, as follows: Sep 22, 16:12 EDT I recently purchased an H&K P30 which, after 535 rounds (divided as follows:) 200 rds. RWS Hobby/Sport Line 7.0 gr. pellet; 200 rds. Crosman Premier Wadcutter 7.4 gr.; 75 rds. Daisy Match Grade Precision Ground Shot; 60 rds. Copperhead Copper coated Premium bb's.) the H&K began to exhibit serious difficulties with bb's jamming in the magazine, causing the magazine to be extremely difficult to release from the mag-well forcing me to repeatedly clear the mag and reinsert it. Also, when switching from bb to pellet, (and yes, i locked and unlocked the mag between switches between bb and pellet ammo, and i was sure to insert and remove the BB spacer each time. I ran through 3/1-2 to 4 CO2 cartridges in the process (wasn't carefully tracking CO2 use). Now the pistol jams every single time, the mag is extremely difficult to release, and will not fire with any ammo, either bb or pellet. Also, the trigger pull was excessively heavy.

I can provide a cellphone number if necessary and would love to speak with you directly if is it helpful. My shipment arrived without a lock screw for the built-in sight. since I had ordered a laser sight along with it, it seemed like no big deal at first.. now that I have been disappointed by the overall performance related to the use of bb's or pellets in this gun, it seems like poor manufacturing and process controls and overall lack of quality in this particular instance. maybe I just got a Friday of a Monday gun, but it was a real disappointment overall.