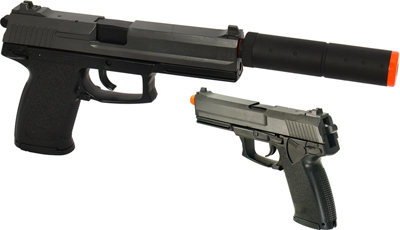 Nice weight and Feel. Sturdy thick ABS construction. Spare mag is a big plus, as some manufacturers will charge up to $30 for spare mags. Shoots very very well. The silencer seemed to add a bit more acuracy for me, and I tried many times with and without it. Looks great like the real steel. Punches targets with authority.

The slide/cocking action could be smoother. Also, offering the HK-to-Weaver/Picatinny conversion rail adaptor under accessories would be nice for folks who want to go extreme tactical and add accessories. That adaptor is easy to find, so pyramid air can definitely offer it.

Big frame gun, not really for small handed shooters. To cock this weapon, use a firm, smooth raking motion (not rough though) and let the slide clack back with some spunk. Otherwise sometimes it will not feed right. Keep it lubed as well. GREAT gun for beginners or vets alike that want a great spring pistol at a great price.

Its actual size and shoots hard

There is just to much plastic. It needs to have some metal weights in the grip. I put poor accuracy because all the shots curve up bad! The slide is real cheap and hard to rack, it gets stuck on something. I have trouble getting it to load. The slide also wont lock back like on many other airsoft guns. The controls are all fake, unlike the USP model for a few dollars more.

There is just to much plastic. I know it is only $20 dollars, but I bought the beretta 92fs (a much better gun) for only $7 more. This gun is to light and flimsy. It feels very cheap compaired to many other airsoft guns. Spend a little more and get the Beretta 92fs or the H&K USP. The USP is just the compact version of the Mk23, it is still a good sized handgun.