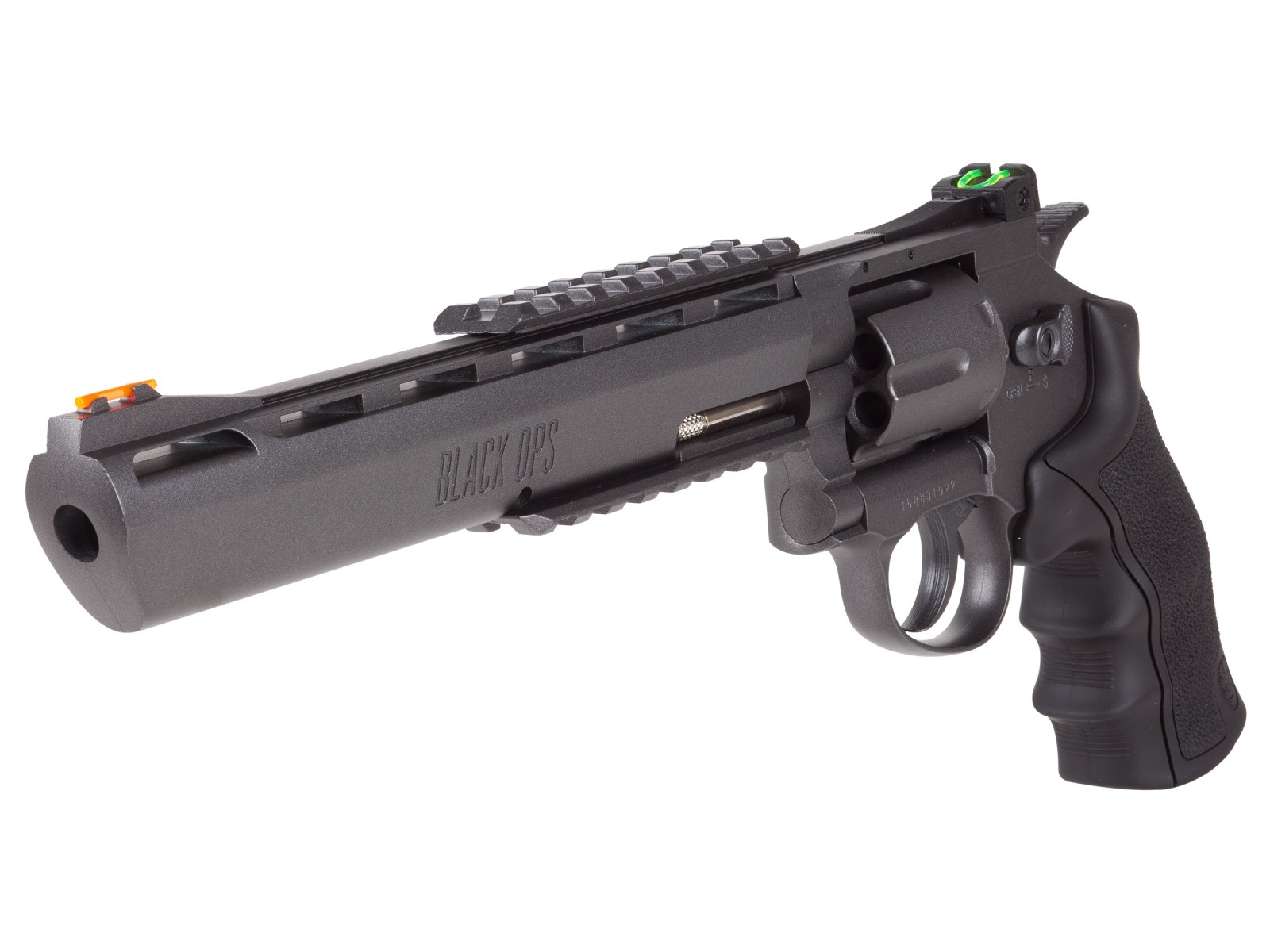 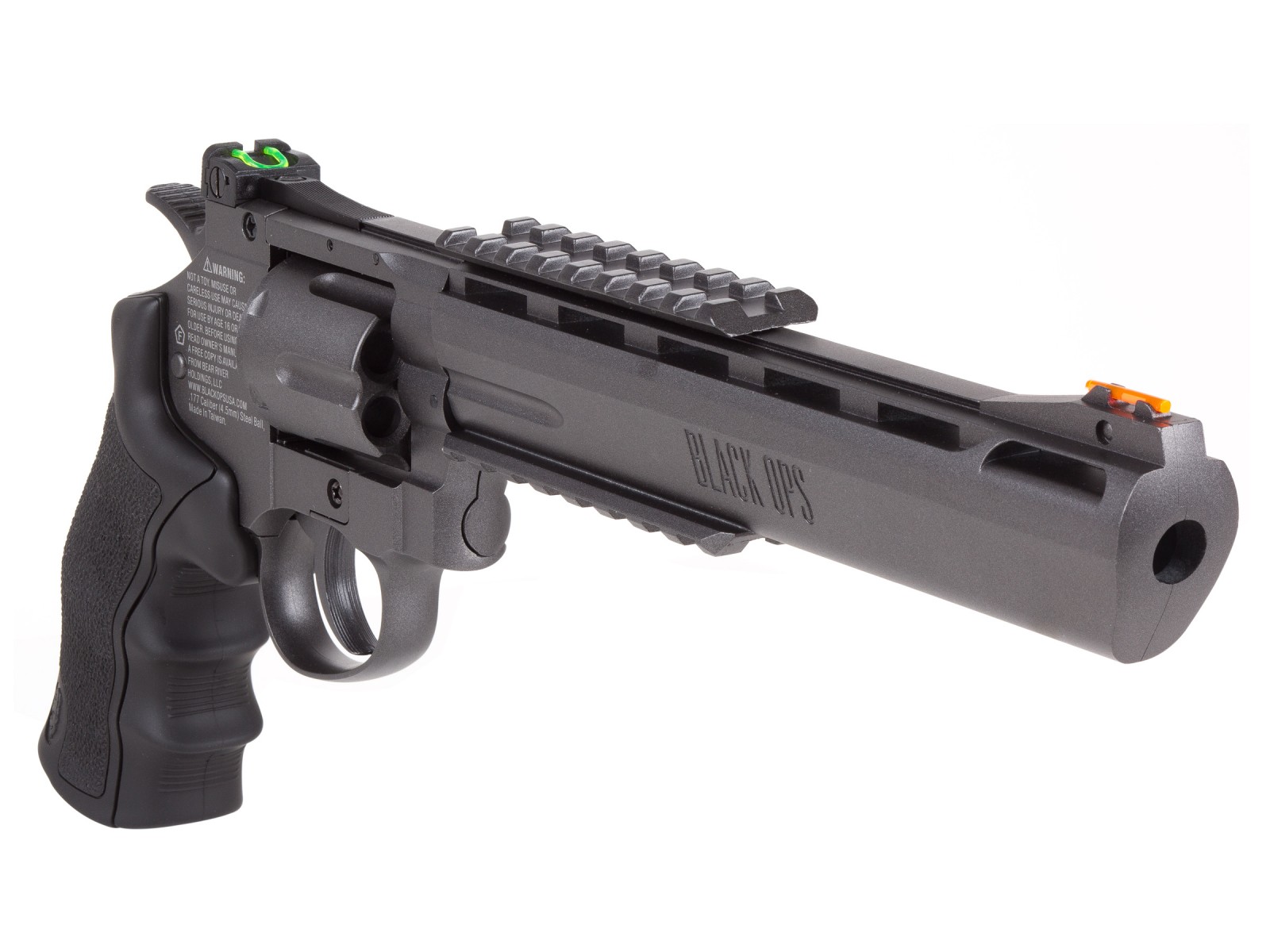 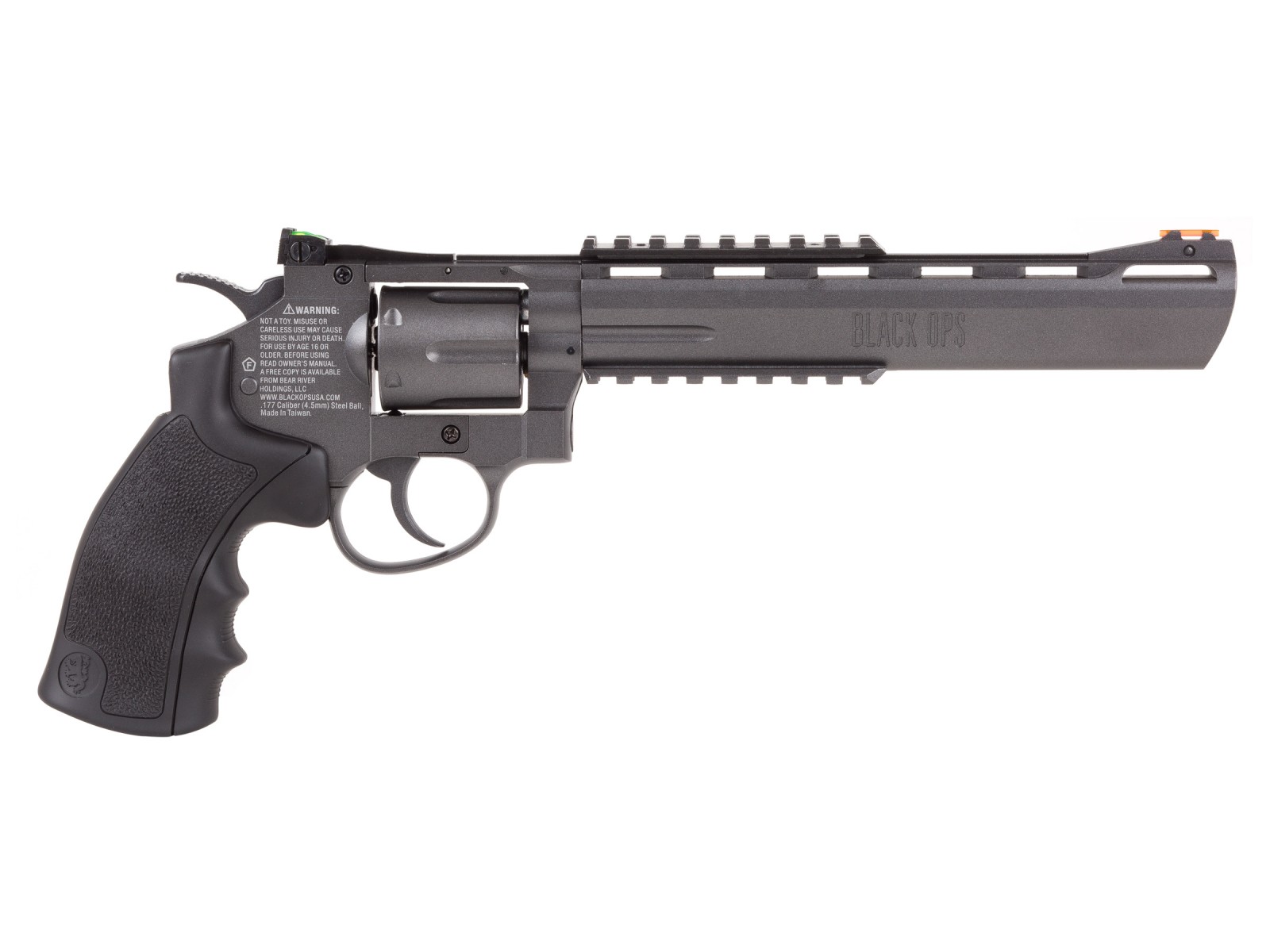 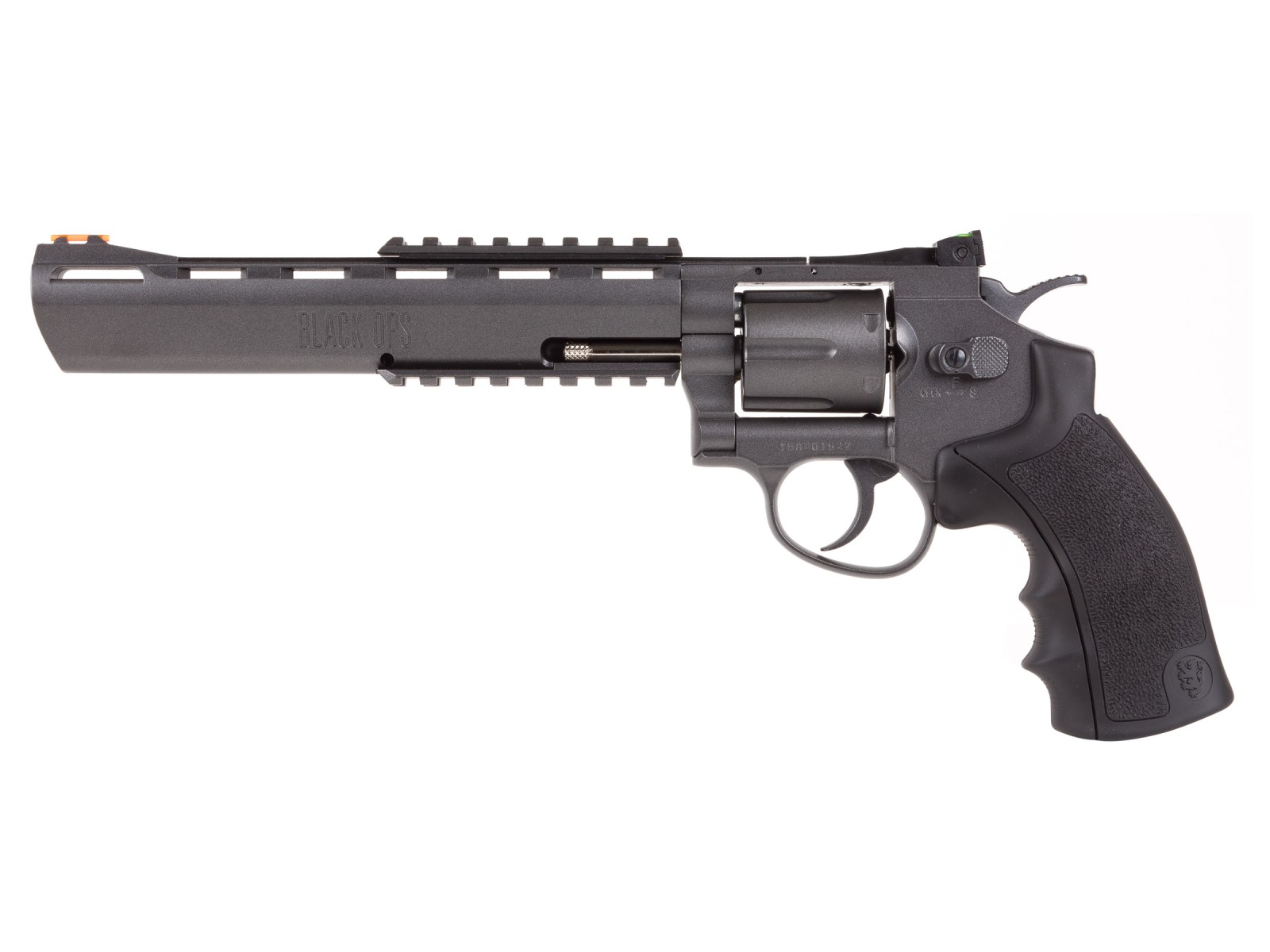 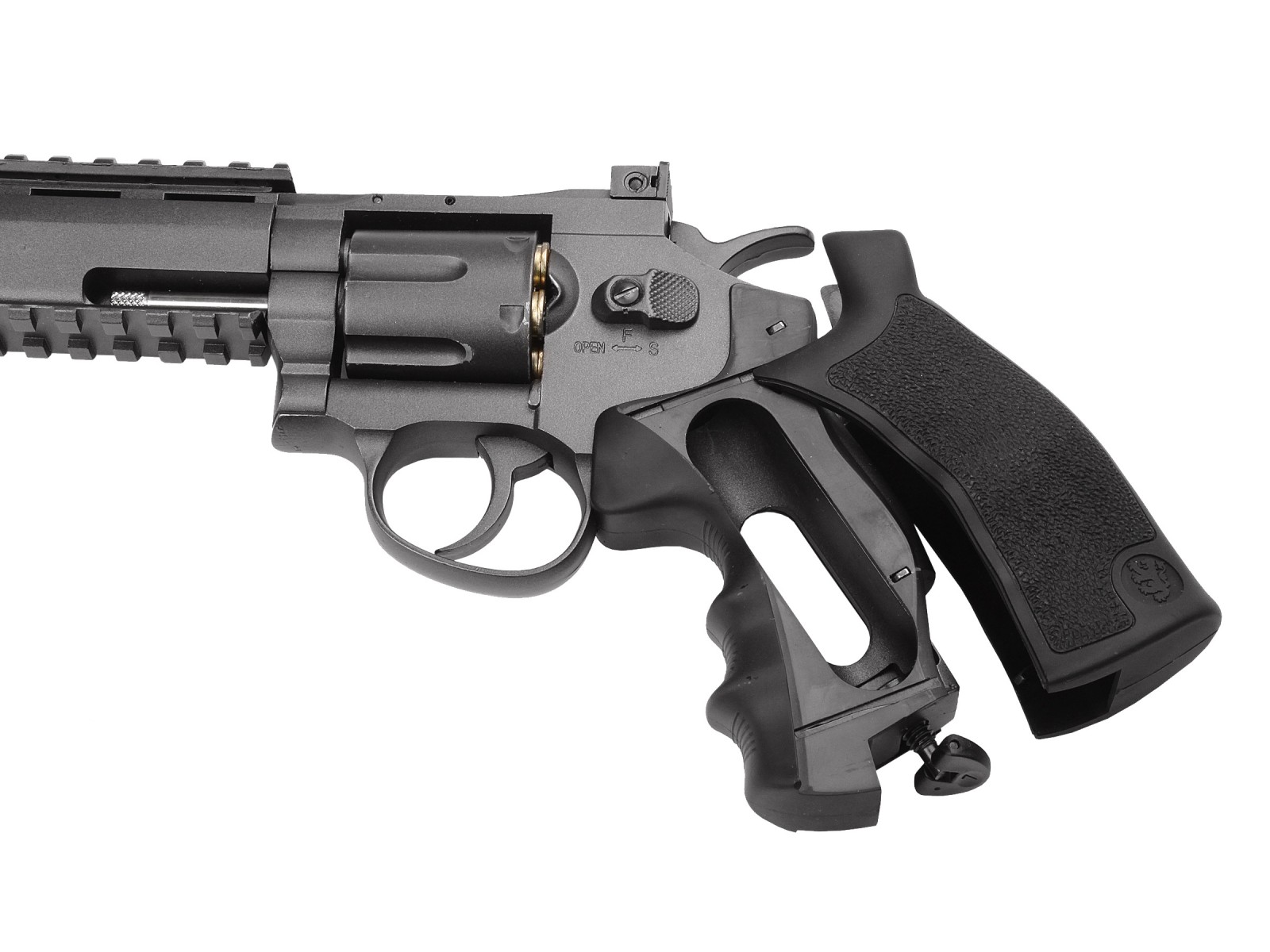 See other products by Black Ops

See other products by Black Ops

Absolutely love the look of this revolver, feels amazing in the hand, I am very happy with this purchase.

I would definitely change the barrel length, it appears to have an 8 inch barrel, but sadly this revolver is merely a 4 or 5 inch barrel at best, due to an impressive barrel shroud. I believe it would be much improved if it actually had an 8 inch barrel and also rifling for lead pellets.

Excellent revolver for the money invested.

I ordered this Black Ops gun as per picture in ad (same as picture above) has the wording "BLACK OPS" embossed in barrel. When i received mine the barrel is completely blank? There is nothing on this pistol showing it to be Black Ops. To me its just a repainted 8" Dan Wesson which I already have every model of. Truthfully its actually a 6" Dan Wesson with extended Barrel surround but it was bit cheaper then actual Dan Wesson BUT if I'm buying a BLACK OPS shouldn't I get what was showed, marketed and sold to me? I contacted Pyramyd Air but no response yet.

If you advertise a 8" barrel it should actually have a 8" barrel not *" casing with 6" barrel inside . If you show and display gun with "BLACK OPS" embossed on barrel then provide customer with that actual item. I gave it three stars for accuracy from videos but I haven't fired it as of yet. I have over 160 pistols but only really use two or three for plinking.

Accuracy. I didn't know a bb could be this accurate.

I had to return my first unit because it would not puncture the c o/2 cartridge. The second one does but barely. The screw has to be bottomed out to where it cannot go any tighter in order to operate the gun. When I remove the cartridge the air takes 5 to 7 seconds to hiss out. My other guns release what's left all at once and there is a nice hole in the cartridge. No hole to be seen here. I am concerned that I am losing a few shots & power because the c 0/2 cannot get out fast enough. I get about 75 shots. I hope I do not have problems later with this part of the unit. I looked at the hole puncher and it looks rather feeble and shallow compared to my other guns.

Don't expect any help from the manufacturer. I called the number on the box, you know the number it says to call & not return the unit to the retailer, and they don't answer or return your call off the answering machine. Same with e-mail, they won't answer that either. If not for these two issues I would have rated it all 5 stars.

Thank you for your comment!
Just add a shim. period. Super glue a small washer at the base!
Add a Small washer to use as a "Spacer" between the Co2 cart and the bottom of the Scarew in plate. Cost+.50C and 2 minutes of your time;)
Some co2 cartridges are slightly longer than others. The Crosman cartridges (which are ubiquitous) are a little short for some guns. Try the Daisy, Umarex or another brand and see if it works better. they usually cost a bit more but some guns need the extra long neck they have.
U would be better off using a nylon washer IMHO
Add comment to this review
+ Load More