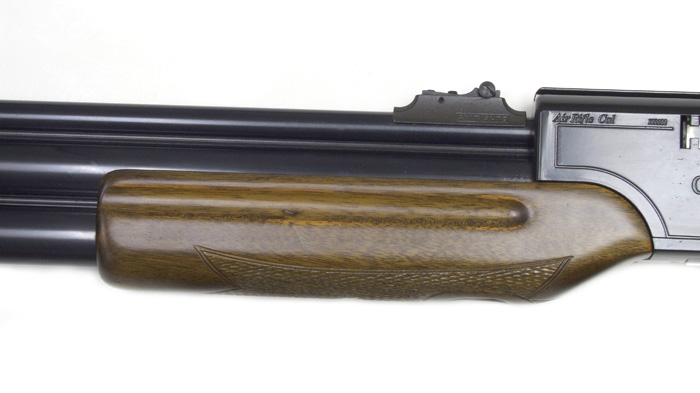 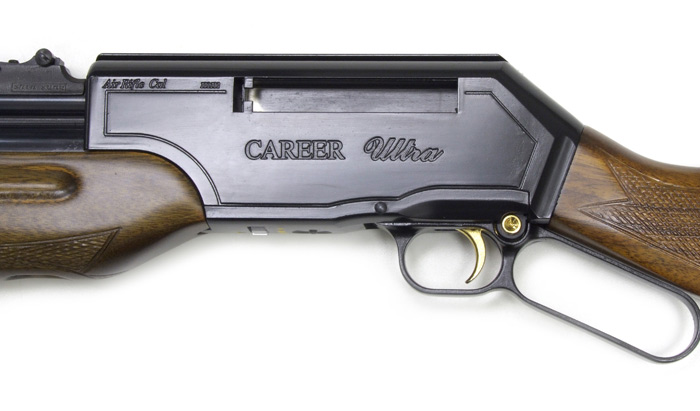 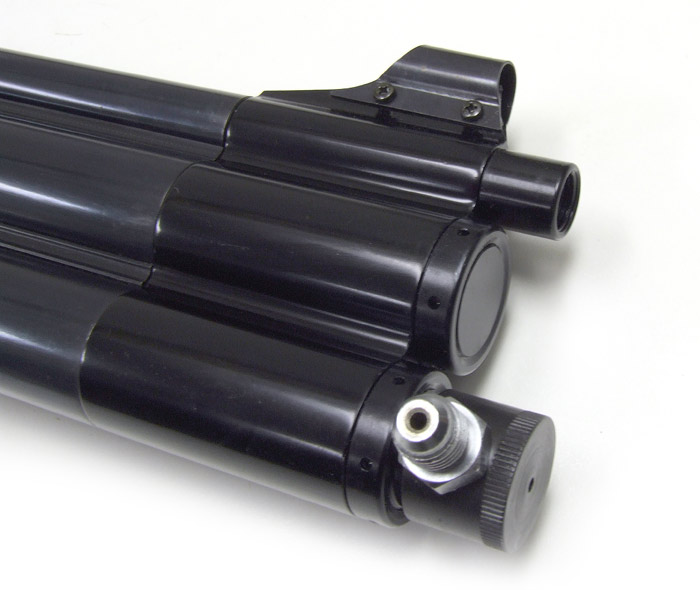 Stunning hunting power from a 9mm air rifle! The Career 707 9mm Ultra is a completely different gun than the standard 707. Its awesome power takes game with amazing authority. While other air rifles can send pellets roaring downrange over 900 fps, imagine what power you'll get when you send 9mm lead pellets flying out the bore!

Because the magazine permits only short pellets, we recommend that you use ONLY our 77-grain Eun Jin pellets. If you want to shoot heavier pellets and even lead pistol bullets in 9mm, buy our Fire 201S 9mm single-shot rifle.

The 9mm Ultra shares some of the great features of the smallbore Career 707...a multi-shot magazine, lever-action cocking, two air reservoirs, a built-in manometer (air pressure gauge) and adjustable power levels. That's where the similarities end!

The Career Ultra is a larger, heavier rifle, and the air reservoirs hold 500cc of high-pressure air. With 6-8 rounds in a clip, finishing shots are easy to deliver. You'll be able to hunt all day if you pre-load extra clips. The front sight is a hooded bead, while the rear is fully adjustable. Career rifles are known for their extreme accuracy at distances usually reserved for firearms, so mounting a high-quality scope on the 11mm rails lets you place shots exactly where you want them.

Don't forget to click on the AMMO link to stock up on our Eun Jin pellets (the ONLY ones that work in this rifle). The ACCESSORIES link has a list scuba tanks and hand pumps, scopes, night-vision devices, paper targets and maintenance items.

I have 12 rifle to hunting and the career 707 9mm ultra is my favorite.

Powerful and accurate, especially with .360 round ball. Solid and well made. This gun is very loud when adjusted to full power, but very quiet when turned down to mid or low power. If you are going to shoot it at high power it has a threaded barrel. This feature makes it easy to attach a silencer/compensator if you live where this is legal.

Overall, I LOVE it!

The Ultra loads easily, fires smoothly, and has the blend of weight and ballance to makes it a hoot to shoot!

My Ultra needed several improvements to make it the fine shooting instument it has evolved into: polishing the rifling to a precise 8.95mm consistency, removing rifling in the breech that was cutting the bolt o-rings, and bevelling the lip of the barrell air inlet to allow for concentric seating of bullets without shaving lead off their lower edges. The factory o-rings for the sliding bolt seal lasted less than 200 rounds, and after some experimentation were replaced using staged 1.9 mm thick o-rings (4.8 I.D. followed by 5.8 I.D.) in order to seal the breech up tp the 2600 psi optimum pressure for this rifle. Fill the o-ring grooves with sticky silicon grease prior to slipping the o-rings on.

As other reviewers indicate, this is a rifle for experienced pcp airgunners who have the skill to understantd the mechanics of the wheapon - or who at least have access to someone who does. The 102 grain cast Lee bullets work well, but the Hornady .36 cal roundballs are a breeze to use and are just as accurate, so why waste time melting lead when you could be out shooting for around a nickle a ball. Also, for quieter, slightly more accurate and for comparable downrange energy, shoot 60 grain Aguilla .22-SSS ammo from a quality bolt action rifle - but there will be no kick and not nearly as much fun!

Thank you for your comment!
Hi Mr Leland! I'm from Argentina, and I would like to buy one ultra 9mm career, can you tell me wich hornady ammo are rigth? I saw in the hornady webpage two kinds of .36 roundball ammo's: the .36 Cal .350 Lead Balls (SKU: 6010) & 36 Cal .375 Lead Balls (SKU: 6020.). In other hand, Which is the useful range and groups to this distance? I apologize for the quantity of questions, but I didn't find this information even consulting to factory. thanks Guillermo
hi, i read on all the reviews that this gun loves round balls so i purchased the hornady 36 cal's. i changed the pellet stop and the balls load fine during the first half of the cocking procedure (pushing the lever action out towards the barrel) but when i pull the lever back, the action gets very rough and "crunchy" for lack of a better term lol. you seem to really know this gun. please let me know what this is and how i can fix it. thanks in advance - phil
Add comment to this review
View All Reviews
+ Load More