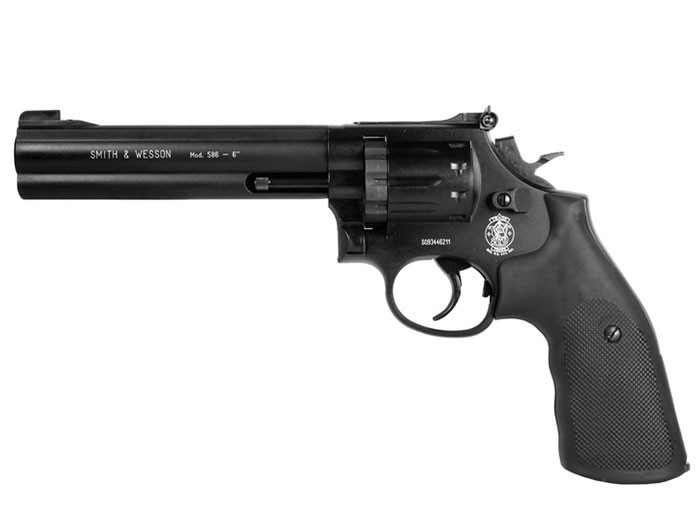 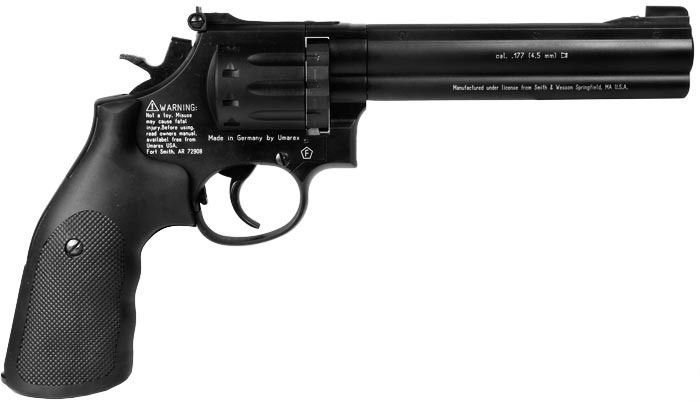 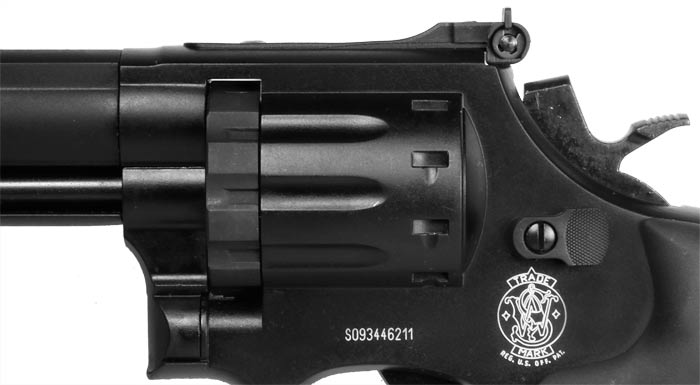 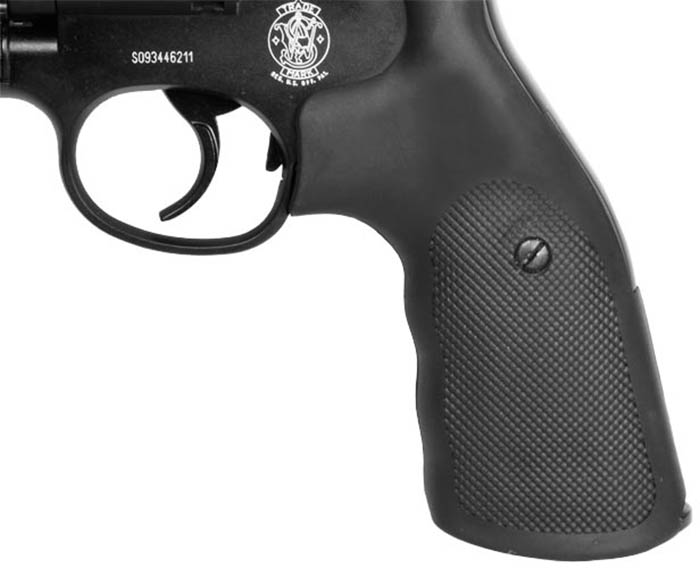 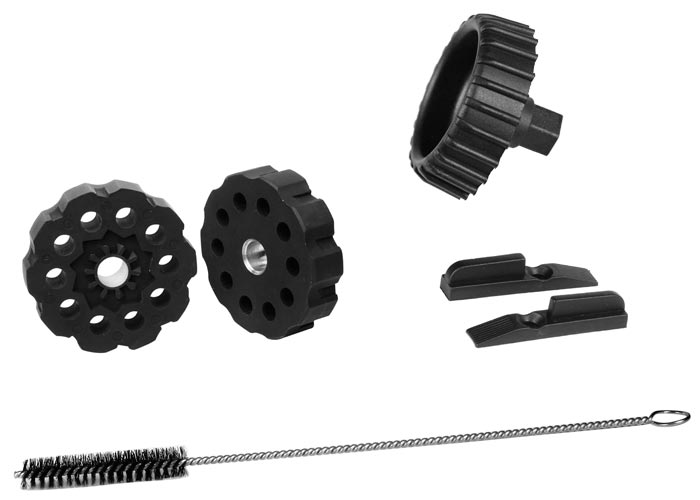 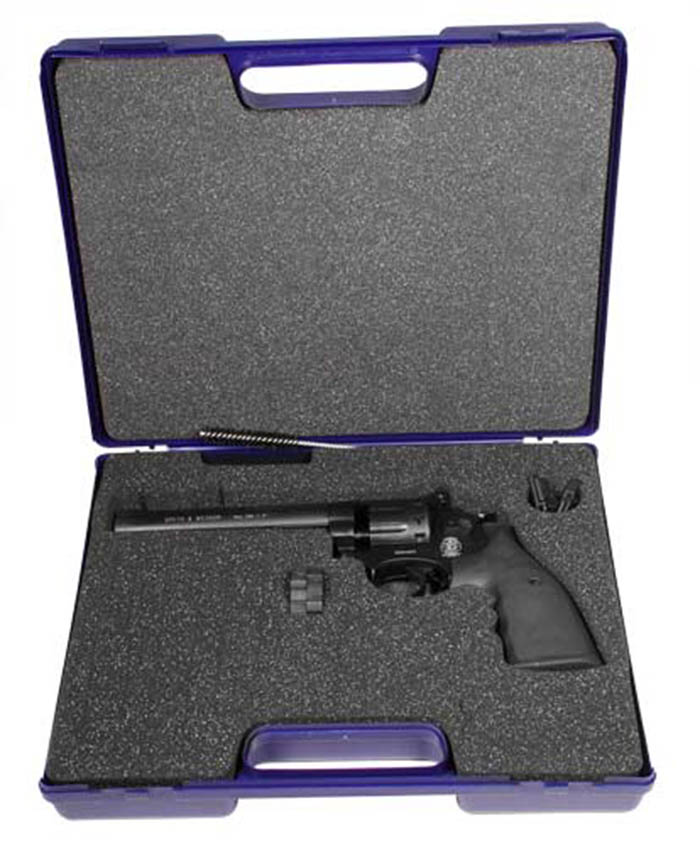 If you seek realism in an air pistol, this is the one to get! The S&W 586 revolver functions and feels like the firearm. Shoot it double-action or single-action. The crane swings out and the removable pellet clip is on the end of it. Fill it up, close the crane and commence to shootin'!

There's an extra 10rd clip included, plus a total of 3 front sight blades. One is already attached to the gun. The blades are different widths. This allows you to use the width that you feel best helps you get the most accuracy.

It took a bit of effort and patience to correct most of the defects I've encountered but, with the assistance of PA's excellent Customer Service department and some smithing and fabrication on my part (needed correct a defective rear sight), I'm very happy with this revolver. Tom Gaylord reviewed the S&W 586 revolver on his blog four times (in 2005, 2006, 2009, and 2012). I think even Tom has forgotten how many times he's reviewed and liked it. In his 2006 review Tom said, "The S&W 586 and 686 revolvers made by Umarex are the best CO2 revolvers that have ever been made bar none!" When Umarex puts one together right, my experiences support that opinion and I'm very pleased that I finally decided to buy this German-made airgun after placing it on my wish list many years ago. After PA put it on sale a few months ago and also fearing that it would finally be discontinued soon (long rumored to be likely, due to high manufacturing costs), it looks like I made the right decision just in time.

I experienced several Umarex manufacturing and assembly defects in both the original unit shipped and its replacement. Umarex dropped the ball on quality with both of the guns, which is surprising and disappointing--especially considering that the S&W 586 is a product from the Umarex German manufacturing line. My first 586 box lacked the two extra different width front sights. Even worse, the gun consumed high levels of CO2, yielding only 34 shots at most. Finally, the double action trigger was rough with a catchy spot. Thankfully, PA exchanged my first gun for one with the correct set of front sights, an excellent trigger (lacking even the commonly reported small amount of creep in single action mode) and normal CO2 consumption (50 very accurate and consistent shots and 64 total shots maximum per CO2 Powerlet vs. about 30 good shots with the first gun), but my replacement 586 had issues too.

The windage adjustment screw circlip groove on my 2nd gun was incorrectly cut so the tiny circlip screwed off the threads during adjustment. Then it and the even smaller detent plunger were lost when the sight fell apart. I made a new detent plunger and I found tiny circlips at Napa Auto Parts to secure it. I was able to turn the windage adjustment screw in my lathe and correct the circlip groove and also 3D print a tiny custom spacer to remove all backlash and preclude another rear sight failure. My 2nd gun's right side plate finish is also defective (too light to match the rest of the gun) so I'm trying to get a warranty side plate form Umarex. Otherwise, it's now perfect but it's also a discontinued model and I don't wish to risk a factory return and a new set of problems!

When you first pick up the gun you know that it is a quality product. It is the same weight as the real thing. Even the trigger pull is the same in both double action and single action. Practicing with this is as close as you can get without firing the real thing. It came with a nice fitted carry case and two pellet cylinders. The cylinders are made of heavy steel and are thick. I also ordered the extra three pack of cylinders. I get fifty shots out of a CO2 cartridge. The accuracy is excellent. I get half inch groups at 7.5 yards.

The only thing that I was a little disappointed about was the blueing. It looks like the blueing had runs in it on one side of the frame. The other side is fine. I expected a little better from a German made pistol.

Thank you for your comment!
Yeah--the finish is flawed on my recently purchased 586 and I too expected much better finish quality from Umarex's German manufacturing. My right side plate is a much lighter and slightly greenish gray shade than the black finish covering the rest of the revolver and side plate finish is a bit blotchy in places too. Maybe it caught a case of German Covid lockdown from the factory! :( I'd return it, if PA still had a replacement to offer, but this is actually already an RMA replacement for me. My first gun had even worse problems!
Add comment to this review
January 1, 2021
By Paul

The accuracy of this pistol is really very good. Also it's adjustable for not only windage, but also for elevation - not all pellet guns are.

I would like to be able to buy more "wheel" mags for this gun, but they evidently aren't available. It comes with two, but we shoot in a competition and more mags would be a lot better. Any progress on that front Pyramyd Air?

Buy one quickly, if they still have them. I know they've been on sale and it really is a good pistol.