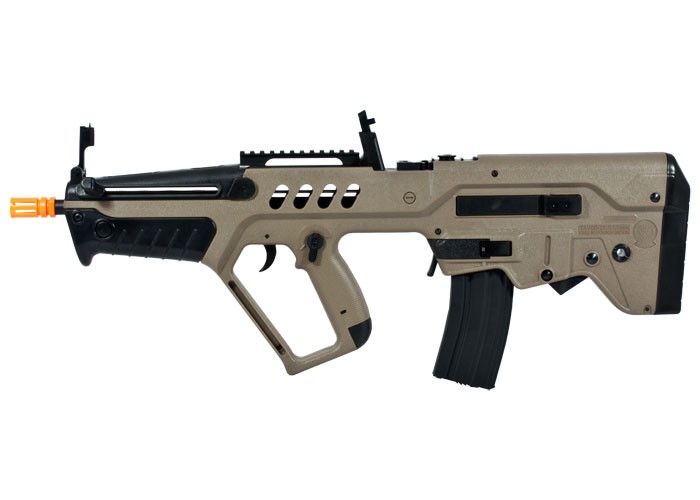 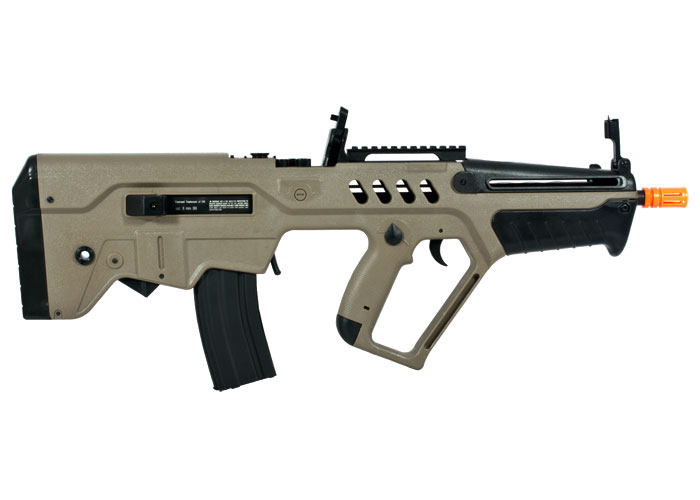 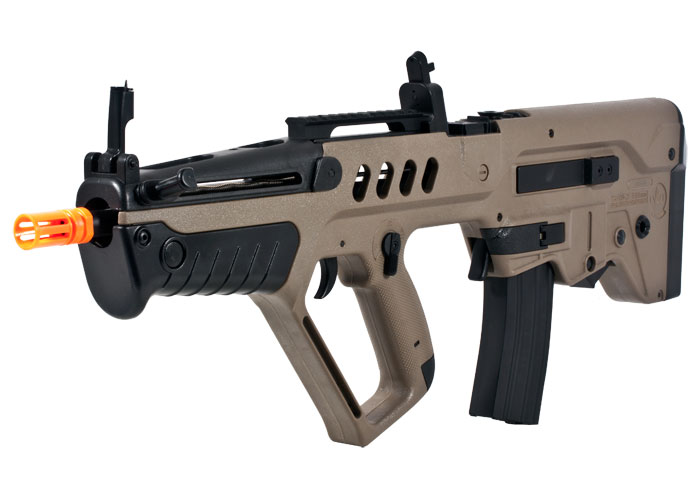 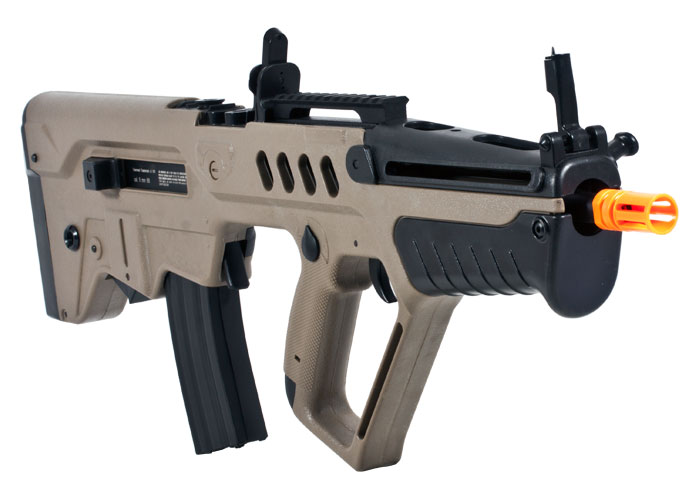 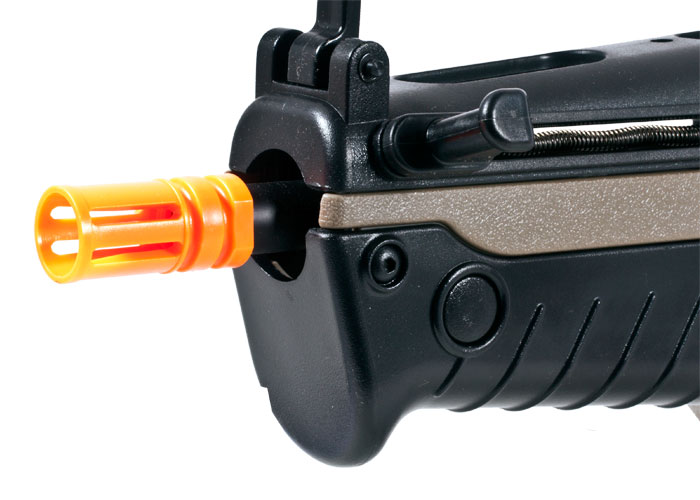 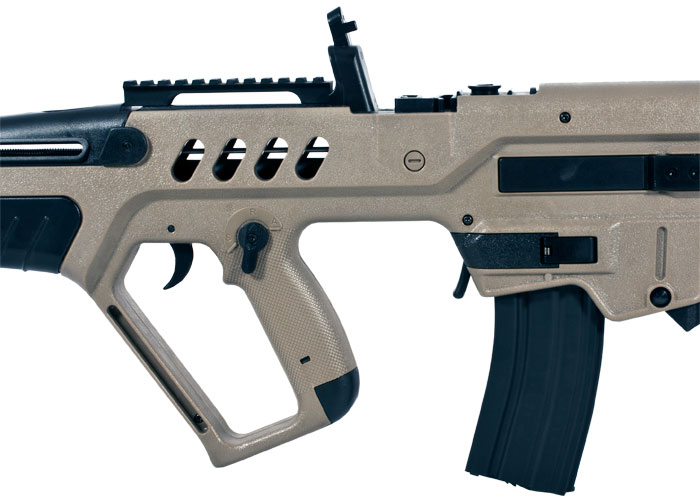 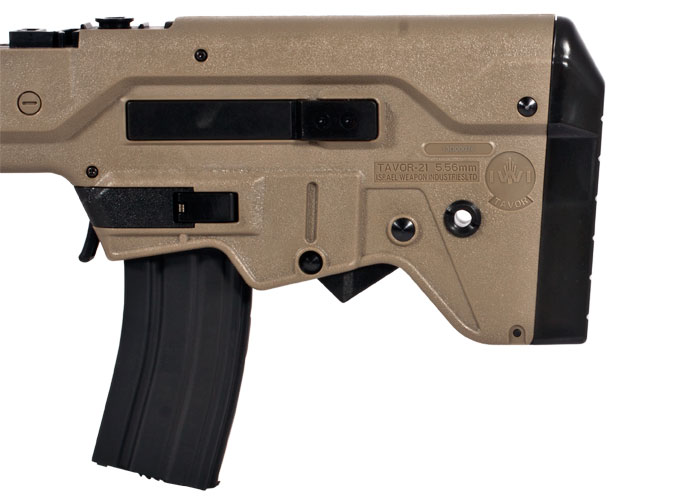 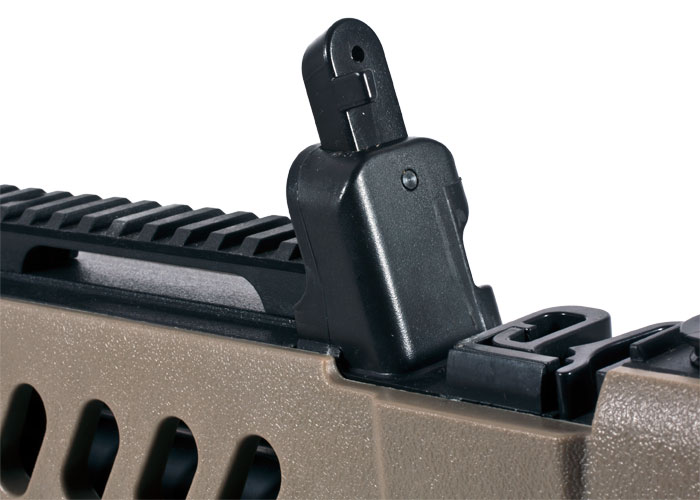 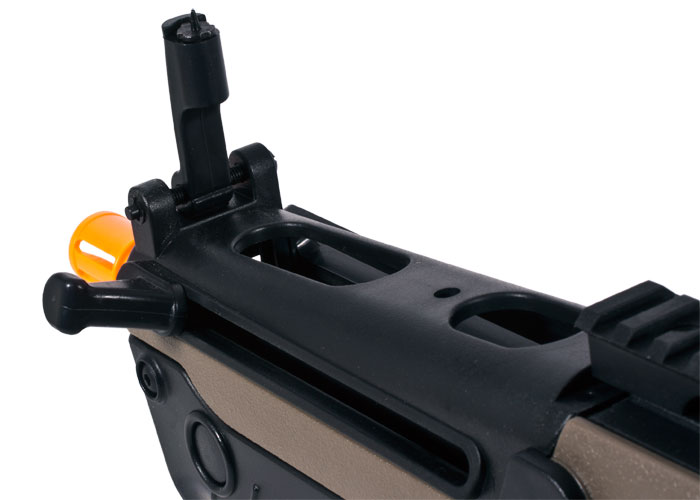 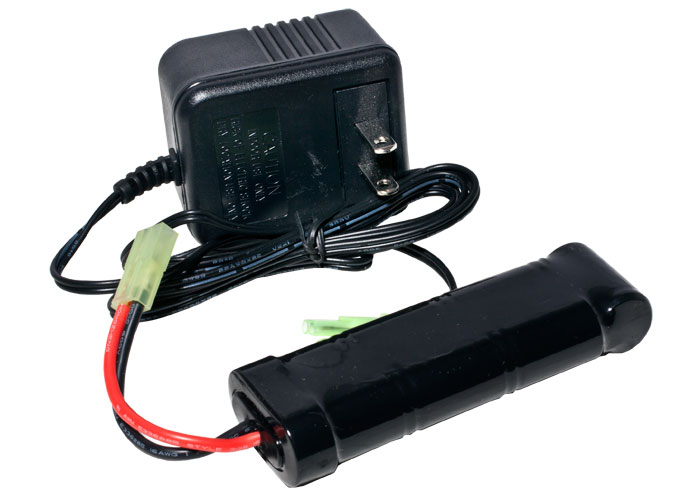 See other products by Umarex


The Umarex Tavor 21 airsoft rifle is one of the most durable and innovative airsoft guns on the market today. This rifle has a shortened barrel and is ideal for cqb airsoft skirmishes. The Tavor 21 is patterned after it's real firearm counterpart and has an ABS plastic stock, grip and handguard. The gun's design is currently issued to the I.D.F. (Israeli Defense Force), it's compact body size and superb functionality replaced the standard M4/M16 rifles that were used by the I.D.F. for over 40 years. The Tavor 21 features a Weaver/Picatinny tactical rail for mounting rifle scopes, flashlights and other accessories, a high-capacity 300 rd magazine, and a shot velocity of 340-360 fps (using .20g BBs). The rifle is capable of powerful shot velocities and is recommended for use with .20g ammo or higher. The Tavor 21 also has an adjustable hop-up unit that lets you dial in the amount of back spin for greater accuracy on long-range targets. Add this unique gun to your airsoft gun armory today!


See other products by Umarex

Very solid and rugged feeling. Good rate of fire, though it goes up with a higher capacity battery. I'm quite used to bull pups, so I don't even think about the magazine position, but considering the issues some people mention with bull pups vs conventional rifle arrangement, I think this is one of the better implementations. It's really fairly easy to access even from a prone position. Battery is fairly easy to swap, though I find that it takes a little practice to get the hang of the mechanism. Still, better than many. Position for the optional sight rail is very good. Hop adjustment is easy and there is a good mechanism to cover those sensitive components. I also like the position of the selector switch. Good balance . Overall it's what you want out of a bull pup rifle.

I find that the picatinny rail is not as stable as it should be on the windage axis, though its fine on the elevation axis the windage wiggle is only +- maybe 1/4 to 1/2 degree but it's enough so that any fine tuning of the windage dial of a dot sight is nearly meaningless. I'm sure there is some hack that I just haven't come up with or found to stabilize this component. It should be a simple matter. That said, this sort of thing is not all that uncommon with airsoft AEG's. Another issue with the rail: It should be a 3/8" higher. Low profile dot sights are so low you have to really squeeze your face down to see the dot. I found a good dot sight to fit it perfectly , but it's larger and heavier than it needs to be. The box: It really should accommodate at least a modestly sized dot sight , since its entirely likely the customer will use one (esp. with a rail installed on the gun) They never seem to think of this and you end up with a nice box that won't fit your gun anymore.

Although the stock sight is interesting. I don't find it practical. I think it makes sense to mount a dot sight, but if you select one with one of those quick release "clamp" things, then you can easily remove it and store your gun in its original box! I purchased this sight from pyramid air : "1x32.5mm ITA Combat Red/Green Dot Sight, 1/2 MOA, 38mm Tube, Riser, Quick-Detach Weaver/Picatinny Mount " and it works very well indeed with this gun. The high cap magazine it comes with is easy to load with a standard airsoft "bottle" type dispenser. Velocity is right in the middle of the range for AEG's (getting 340 @.20g ) Though considering the tough, metal gearbox and ample battery space, I might consider having mine modified for a little more oomph and/ or ROF, though the ROF is decent with the stock battery. I'm just thinking that it's a robust platform and a good candidate for reasonable mods. (Of course, modding voids the warranty, and PA will undoubtedly recommend against it )

the gun has an easy battery swap out and the mag is easy to get at in a scrim. rate of fire isn't too slow nor too fast however a better output battery would make it little faster if you like that. I enjoyed it right out of the box.

Totally recommend adding a sight to it the iron sights are great but the gun has much farther range then the sights are good for and having an Acog 1x32-4x32 or Red dot sight adds loads better accuracy at long range. I use this as a semi sniper in mid-range matches when i cant use my sniper.

It would be super nice if you guys added a speed loader in it for the price you pay for this, at least a sling or some rope to make my own. all i got was a gun and battery with charger. figured those other things would be common sense to add via the size and space in the box that was holding the gun. you can send that all to me later if you guys would like or maybe in my next order.