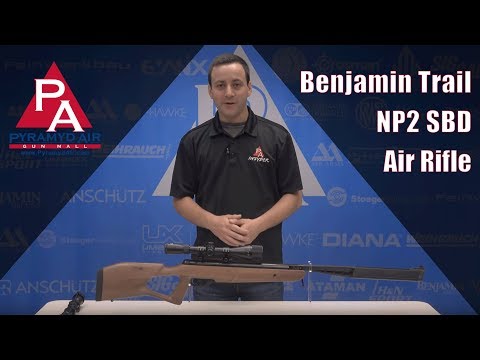 The quiet NP2 is now even quieter as the Benjamin Trail Nitro Piston 2 SBD. The SBD (Silencing Barrel Device) adds an improved barrel shroud that makes the NP2 SBD 3x quieter than other breakbarrels in its class.

Welcome to the Pyramyd Insyder, I'm Tyler Patner. Today we're going to be taking a look at the Benjamin Trail NP2 SBD in .177 caliber.

So this new SPD version of the Trail NP2 was announced at SHOT Show 2017 back in January. Basically the same internals as the existing Trail NP2 series, just with a new suppressor update on it. So this is their SBD silencing barrel device and it is basically a baffle system encased inside of a shroud unit that sits on the front of the barrel. So the unit has a very unique look to it and there's something I want to point out to you guys that you'll notice, that the barrel sits up pretty high on the unit so this is actually an eccentric or offset shroud system where most of your volume is actually below the line of the barrel, which is a good thing because it doesn't come it into your line of sight, and the other good point about this is that it does have a molded in front sight. Now the one problem with that in this particular instance is that Benjamin doesn't include a rear sight. So for those of you wanting to use open sights on this particular model I don't know if one's gonna become available, I would certainly hope so and I know there are other SBD models that do have the rear sight that comes with them but it's not standard with the hardwood and the synthetic models in particular. So something to be cognizant of but you do have the ability to mount that rear sight if one becomes available. Benjamin's claiming that the SPD unit is three times quieter than any rifle in its class so you're comparing it to other guns rated at 1,400 feet per second with alloy in the .177 caliber, and obviously we'll find out what that number is for you guys with lead because I certainly am NOT gonna shoot alloy in this and hurt the internals so. That being said you know inside of this unit here. It's an aluminum case shroud surrounded by plastic so you do get a little bit of flex with it but it's a very large exit diameter hole so you're not gonna have to worry about clipping or anything like that. And because all of the baffling is made integral to the barrel you really should never experience clipping of a baffle or anything that's going to throw off your accuracy from the shroud unit itself. And another cool thing about the SBD is that the aluminum shroud is actually removable so you can clean the internals of it. Just a screw here on the top, screw here on the bottom, you pull that end cap off and then slide the shroud right off. Very easy to do. Like the original Trail NP2 series, of course, the SPD is a break barrel. It's right around 30-45 pounds of cocking effort, not too bad that NP2 unit that's inside of it's been out for a little while now and we know not too bad to cock for the power that it's putting out, so a tried and true unit inside the gun.

And as you guys can tell we have the hardwood version here for you today. About 8 pounds overall maybe a little bit over that with the scope. And one nice thing that I think Benjamin really hits a home run with on most of their rifles is they incorporate sling swivels and a sling swivel stud at the back of the gun. So you do have the option amount of sling for those of you guys that are gonna be carrying this in the field. And while we're mentioning the stock, it is of course the thumbhole and I really like the feel of the thumbhole, it's got that raised cheekpiece brings you right into the scope. Overall it feels very nice although one thing I will mention is that it's a very short reach to the trigger, so you'll notice that you know most of my finger goes to the front of the trigger guard almost immediately, so if I take it off safe you know it, my finger sticks out a little bit alright when I go to get that proper trigger pole placement on the trigger shoe here. It's a little bit of a different feel, I would expect a gun like this to be a little bit longer, have a slightly longer length of pull but the good thing about that is that shorter shooters, taller shooters, nobody's gonna have a problem pulling the trigger on this gun. And of course, capping off the back of the stock, we do have a rubber recoil pad which is going to keep things nice and comfortable in the shoulder. And on top of the gun, as far as an optics rail goes, we do have a Picatinny rail on top here, and the gun does come with a 3-9 non parallax adjustable scope. Obviously, it's not on the gun, it did have some problems with it holding 0, which is kind of par for the course for you know, an included scope in these packages. One thing I would really like to see a lot of these manufacturers do a little bit better is pay a little bit more attention to these scopes, but for this review today, for the purposes of what we're doing, I went ahead and mounted a Mantis 4 to 12 by 40 with the adjustable objective. Makes my life a little bit easier downrange. Just so you guys do know if you do use this factory scope, it's set at about 25-30 yards in terms of its parallax correction, so if you wanted to shoot at 10 yards you're gonna have to bump that magnification down into the 3/4 range but if you want to use it on full 9 power you know anything really 30-35 yards in that range is gonna be more than clear through this scope. So now that we've run down the features of the NP2 SBD, let's head out to the range, see how she does.

Alright guys so looking over our groupings at 25 yards here, not too bad. We went with the H&N Baracuda matches and the JSB heavies 10.65 and 10.34 grains respectively. The heavier stuff simply shot better, we tried a bunch of light stuff about 12-15 pellets somewhere in that range, and these two pellets perform better than all the others. So the H&N Baracuda matches the 25 yards a 7/8 inch group so under an inch there for five shots. Certainly going to be more than accurate enough for squirrels another small game. And the JSBs did, in my opinion, just a little bit better because you got that tight three-shot cluster there, again 7/8 of an inch though total measurement. So overall a little bit better, but about the same grouping. So certainly small game friendly at 25 yards, let's stretch things out to 45 to see what happens.

Alright guys so looking over our groupings here at 45 yards, not too bad, not great, but not too bad out of a gun in the price range. You're looking at about an inch and a quarter group out of the JSB heavies. You know I had two go in there and two go in there. It's certainly not bad and shows some promise. You know if I get a little bit better, more time with the gun, you know if the trigger was a little bit better, that would make grouping a heck of a lot easier, especially at that distance. And then moving on to the Barracudas. A little bit better, about an inch an eighth, I did have that flyer go up high on me, but for five shots you know it's certainly very very good. And quite frankly, you could probably shrink that down a bit with a little bit more time with the gun. So it shows promise guys, but again, for me, a little bit hard to shoot.

Alright guys so that about wraps it up for the NP2 SBD here in the hardwood stock in .177 caliber. Here's the breakdown ok. Good things, it's a 25-30 yard gun, we know that it's certainly quiet enough with that SBD unit on it for the backyard. The gun feels good, it handles well. Tall shooters, short shooters, young shooters can get with this gun no problem because of that shorter length of pull and reach to trigger. The bad points for me. Of course I'd like to see better optics okay, when you anytime you have an optic go on a gun I would like to see a better quality optic included, that's a given. I do like the Picatinny rail though. If you're gonna put a front sight on the gun why doesn't it come with a rear sight, big question mark in my head. And probably the biggest gripe I have here guys, that clean break trigger, if they call this clean I want to know what dirty feels like because I'm not getting a clean break on this one. At over 6 pounds and in a kind of creepy feel, you know that made getting good accuracy out of this gun very difficult for me. I would like to see them improve that trigger, that's going to improve the performance greatly, because the gun certainly has potential with sub 1-inch groups at 30 yards. So you know 18-19 foot-pounds, this gun’s got the capability and obviously in .22 a bit more, but really could use just a little bit more polishing on that trigger to make it a little bit better. So that about wraps it up for the NP2 SBD guys. Hope you enjoyed the video. We'll see you guys at the next one. I'm out.

Hey guys thanks for tuning in in today's video. If you want to see more Insyder videos, go ahead hit the subscribe button. If you liked the video you saw, hit the like button. And if you want to talk more about the video or another video you'd like to see, comment down below. Thanks for watching.