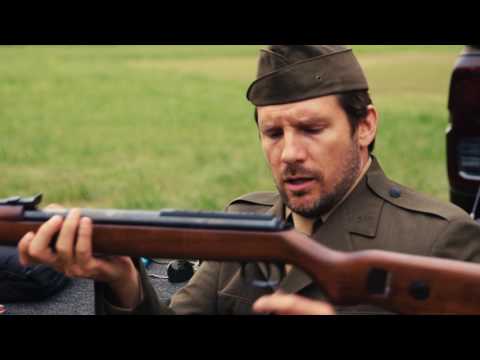 Rossi Morreale gets into character to command and control this famed historic replica for Pyramyd Outsyder!

Can't see them now because they’re this big but the little plastic green army men are coming to get us.

This is the new Mauser K98 inspired by the World War II German K98 from back in the day. This is not an exact replica of the old Mauser K98 but it's inspired by. The original count Mauser K98, it was a bolt-action single-shot rifle. This is not that, this is an underlever airgun single-shot .22. It's a great-looking gun, it's balanced, it's a little heavy, and apparently it's got quite a bit of power because it's set up on the Diana, you know, spring system, spring piston system like the RWS 460 that we know and love. So here it is it. Looks legit. I look Legit. Let’s take a look at it.

Alright, you know there's two things I know for a fact about World War II. Number one, those guys back then were real men, no doubt about it. Number two, their clothes were super super itchy. I'd say this is great for for plinking for small game hunting. I think max was like 850 feet per second, I’ll have to check. I've got the exact jumbo Diablos the JSB's. The 15 grain and the 18 grain. I actually don't know which one I prefer so I'm gonna shoot five of each see what they see how they come out through the chrony, check the accuracy on the sucker. I've got no scope on it, now it does have a micrometer rear set right here that's adjustable for windage and elevation, and of course, it's got the hooded front sight which is pretty cool you can also adjust it. It does have this 11-millimeter dovetail for a scope if you want to put one on, but I like to do my reviews on what comes in the box and when you open the box this is what you get. It does have an adjustable two-stage trigger and the safety’s back here. You know other than that, it's just like the Dianas we’re used to, it just looks really cool like a World War II gun.

Alright so to cock it, just pulled down, it's about 36 pounds to break it. It's a little it's a little shorter lever so it feels a little out of it, all about 36 pounds. We’re gonna start with the 15.89, great pellets. Pop it in there, sit in there and then this gets you every time. You got to push this button. No matter how much I know it's there it always gets me. Now you know it’s there. Safety baby. Going with no glasses cuz it’s overcast and I can't see. I didn’t have sights up so.

All right so without sighting them, straight out of the box. Five shots right there around 729 feet per second all of them and all within about three-quarters of an inch to each other, not bad open sights. Let's move up to the 18 grain just to see what the differences in speed, and I'll just aim for the bottom of that target. 683 I don't know if it's worth it. I think I'd go to the 53.
Take a look at my group a group shot that's kind of a flyer. Not bad I think I'm gonna be better at 50. All right here we go, time to make my grandpa proud.
Whoa ah! Not too bad. Open sights, 50 yards, a little flier here. Let’s go have some fun.

All right we moved over here to the Outsyder range, and we've got bogies 12 o'clock.  Little green army man on top of the coffee mug.  About 60 yards. He's wearing a green shirt in a black helmet. Oh you know this is uh this is a really cool gun. It's about a $450 gun. Great gun, obviously great accuracy. I shot targets 25,15, 30, 35, 50, and now 60, very accurate, has good power. Great little gun for target practice and you know small game hunting. So you can get this at Pyramyd Air. You know I got to tell you, my only complaint, if anything, is that it doesn't come with a full uniform. There you. Thanks for watching the Pyramyd Outsyder. I'm Rossi Morreale, see you next time.