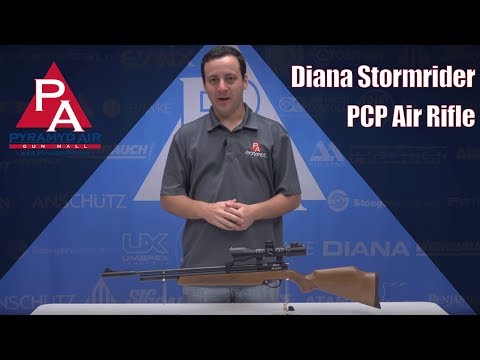 If you've wanted your own PCP airgun but the price has held you back, the Stormrider gives you a budget-friendly PCP that lives up to Diana's name.

Welcome to the Pyramyd Insyder, I'm Tyler Patner, today we're gonna be taking a look at a brand new rifle from Diana, the Stormrider.

The Stormrider’s the first PCP from Diana in a couple of years and it represents an entry into the lower side of the market price-wise, so right around $200 should fit in really well into the market down in that price range. A lot of features packed into this gun, it's available in .177 or .22. We have the .22 here and this is an exclusive first look at this PCP gun from Diana. Let's check out some of the features. Starting at the front of the Stormrider we do have a muzzle break style suppressor, it is baffled inside, will obviously get it on the sound meter and see how quiet it is. It also features a removable front sight as well, so you can remove the front sight and the rear also if you so choose. In terms of filling the Stormrider, it fills to 200 bar, about 2,900 psi, and it is a relatively small cylinder, so that's gonna make this really friendly for hand pumpers out there, and it does come with a fill probe that has a quick disconnect fitting machined in which I love, got to have this on there. Means you don't have to buy any extra fittings to fill this gun. Just slides right into the fill port hole right there, you go ahead attach your hose up and you are good to fill this thing up to 200 bar, really easy. On the underside of the gun we have a very simple color-coded gauge, real easy to see what your fill pressures to. Again 200 bar max fill. So move them back, we do have a cross bolt style safety here, just punch it on through, you see that red ring real nice and easy to use, can flip it forward, works in the hand really nicely, just flip it off safe. It's not automatic as well, it's a totally manual safety and the trigger is not adjustable as far as I can tell, there are no screws on it or anything like that so it is what it is. It feels like it's about three pounds out of the box and not the greatest thing in the world, but you know in this price point I don't expect a match-grade trigger.

The Stormrider is a nice hardwood stock, you do some light checkering here on the forearm, as well as on the pistol grip. In the configuration with the scope that we have on it, it's about 6 and 1/2 pounds, so very lightweight rifle, although it does have a full-length length of pull, so something to keep in mind if you're a younger shooter that's going to be shooting the Stormrider, it does have a full length of pull about 14 inches on it and a raised cheek piece on the right side only. That doesn't mean that a left-handed shooter’s not going to be able to use it, but there is a raised cheek piece on the right specifically. And the stock rounds out a rubber butt pad. Overall got a really nice lightweight feel to it. This is gonna be very easy for anybody to get behind. As you guys can see here it is a standard side bolt action. Now the cool thing about the Stormrider is that it comes with both a single shot tray and in .22 seven round magazine. Does also come with the magazine and .177, believe it holds nine rounds. So you can slide that single shot tray in and if you can see it from here it actually slides in a little magnet on the tray itself, and a little magnet in the breech slides and locks into place. This is going to keep your magazine or your single-shot tray in place regardless of which one you want to use, and you can see that magazine here. Goes ahead slides in just the same way, locks into place, good to go. If you do want to go ahead and mount a scope and keep the rear sight on the gun, it is gonna limit the length of the scope that you use now. We have this three to twelve Leaper's compact SWAT scope on here, which is just barely short enough to not come into contact with that rear sight, so if I wanted to use a longer scope it's just one screw here. You go ahead, unscrew that, and the whole sight unit slides off the dovetail, super easy to do, and if you're gonna put a scope on it to see your best accuracy, those open sights aren't gonna be essential for you anyway. Alright so now that we know about the features on the Stormrider, let's head out to the range and see how it shoots.

Before we go ahead and get to some shooting here, we're gonna show you how to load the mag. You're just gonna take the face of the magazine and rotate it counterclockwise. That's gonna bring it around, you're gonna notice that that hole there doesn't allow you to load a pellet so we're gonna flip the magazine around to the back and we're gonna load our first pellet skirt first. So skirt of the pellet right into the hole there, let it drop in. And then our we are secured under spring tension, so I don't have to actually hold the magazine anymore, I can go ahead and load each pellet head first now. One by one until we are ready to go. So now that we have our magazine fully loaded, we're gonna find the magnet on the bottom of the magazine. You see it right there, there is also a magnet in the breech so we're just going to take it, slide it across there, and it will click into place. Load it up, we're ready to go.

Alright guys, so the Diana Stormrider at 25 yards, pretty good results. The Crosman Premieres were the surprise, we tested about 8 pellets but you know 5 Crosman Premieres into about a half inch here 9/16 a really nice group there might uphold that fifth shot. And on the JSBs obviously, a little bit better here, 7/16 under half an inch, very good grouping here at 25 yards. This gun certainly gonna be able to bust pests all day long at that distance no problem. Moving out to 45 yards things were kind of interesting. The Crosman Premieres under an inch at about 7/8, not a bad group by any means, you know anytime you got a gun that shooting under an inch, especially in this price range, it's gonna be hunting capable, which is great. But the big surprise one is this 3/8 inch group out of the JSB fifteen point eight nines which is actually smaller than our 25-yard group, and because it was so absurdly small we had to shoot another one, which wound up at about five-eighths, still super respectable about 0.6 inches. Awesome grouping here five shots under a dime of 45 yards, $200 PCP, you can't beat that. So awesome results out of the Diana Stormrider.

Taking a look at the shot string out of the Stormrider with those JSB 15.89 exact Jumbo's. You're looking at a 200 bar filled down to about a 115 bar, and you'll notice it's obviously a very pronounced curve as we are used to seeing out of unregulated PCPs, but bear in mind this is only a 100 cc cylinder. So really small air capacity but still producing 24 foot-pounds with a basically a 16 grain pellet averaging 830 feet per seconds not too bad, and what I want you guys to focus on is about shot 9 to about shot 19, that's a 25 foot per second spread right there between 170 and 145 bar and that's gonna be where you want to shoot to give it your best accuracy potential.

Alright guys really impressed with this Diana Stormrider. Very cool new offering in that lower end price point on the PCP side of the market. Obviously, this guns got accuracy for days, you know 3/8 inch group at 45 yards is nothing to bat an eye at, that is phenomenal accuracy. You've got multi-shot capability with a single shot tray that comes with it. The little things like the quick disconnect machined onto the fill probe, I love that. Good shot count, right around 25 shots out of this gun on a fill and 24 foot-pounds of energy means you're gonna be able to take out small game in the backyard with no problem at all. I like the fact that it comes with open sights, but I'm not thrilled with the fact that you have to remove the rear sight to get a decent length scope on the gun, but certainly something to consider when you're purchasing the rifle. And it's not the most backyard friendly thing out there but it's six and a half pounds with a scope on it. Obviously, the Stormrider’s got a little bit everything going for it. So definitely check it out on pyramydair.com. For the Insyder, I'm Tyler Patner, we'll see you guys at the next one.

Hey guys thanks for tuning into today's video. If you want to see more Insyder videos, go ahead hit the subscribe button. If you liked the video you saw, hit the like button, and if you want to talk more about the video or another video you'd like to see, comment down below. Thanks for watching. 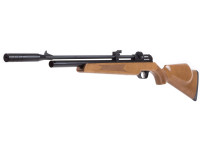