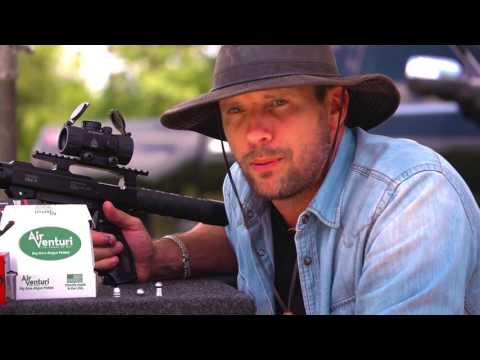 You'll be hard pressed to find a PCP pistol as lightweight and powerful as the Evanix Rex.

Today on the Pyramyd Outsyder, it's the of Evanix Rex P. Never had a chance, that little t-rex never had a chance with the Rex P. Are you kidding me? This, my friends, is the absolute most powerful handgun/airgun you're ever going to put in your hands. This is the Evanix Rex P. There's the Rex, it's a, it's a, it's a rifle, full-size rifle, much longer air air tank here on the back where you would where your air goes, but this is the pistol version. So, Rex P the P stands for pistol. This is the .45 caliber. It comes in .20 to .25, .357, and .45. I don't have time for that other, those little tiny calibers, I had to go right to the .45 caliber and see what this thing is all about and it is an absolute beast. I mean, this thing, look at this, you have your option of basically a bullet which we shoot in our .45 caliber rifles, they got the ball which is also fun because you can do different things with it and carries a different different power and an accuracy process, and then this is new, this is the first one I've ever seen these, these are the JSB predator XXLs and it's basically, not basically, it is a giant pellet. There's a giant pellet so now you can use these for certain types of competitions that you have to have a pellet. You can use a .45 caliber now which I've had to use 357s in the past, so very exciting.

So, let's take a look at this thing. It doesn't come with a scope. It does have the weaver rail up here. I threw a UTG laser dot on there just because, I don't know, it looks cool and it's super fun, but basically, you're looking at a very tactical, you know, steel frame. It's got a plastic handle, everything else is steel, and then back here is the air reservoir which you can actually unscrew and you can have you can have multiple of these with you. In the .45 caliber, you're only gonna get 4 to 5 shots with this thing because it's it's it packs a wallop for sure, not to mention it's super loud, which I love especially when I'm hunting dinosaurs. I like for the other dinosaurs to know that I'm there, so they don't come creeping through the woods. One for the gun reviews. Back there you can see how much air you've got in there, at 200 bar is the, well 220 is the max, in the green it's 200 bar to 100 bar, 220 bar is about 30 almost 30, 200 psi so it's pretty good air pressure in there and it's a fill it. You just take that off. It comes with its probe, right, so you just take the back off, hook this up to your tank obviously, and just pop it in and there you go. I mean, I got to tell you, though it's a .45 caliber, so I don't know if you shot an actual .45 handgun lately, but they're not the easiest thing to control if you're not used to it, so it's definitely, you want your targets close, so you can hit them.

The other cool thing here is the cocking mechanism. So, it's under lever here. It's part of where the trigger guard is or it is the trigger guard, I guess, so, you know, you just, it comes down, cock right here, you can see the breech opens, that's where you load it up there on top and then as you close it, and then so you've got this little piece right here that you have to you just bend down and then it closes. That's it. You got your safety right here, safe fire, so, you know, as you can see it's pretty simple right there. It is known, what I hear, as the hand cannon so I'm gonna test it. Obviously, I'm not gonna test for accuracy because that has nothing to do with the gun, that has everything to do with me, but I'm gonna look at some, I wanna, I wanna shoot each one of these, see what kind of foot feet per seconds we're getting, look at the foot-pounds. They say you're in some calibers, you're getting like 90 foot-pounds, maybe even more at the .45, I don't know, but let's put up the test and see what this thing is all about.

Alright, so, first things first, I'm going to start with the ball. The ball is a hundred and forty-three grain. It's the smallest of all these. So, let's pop it in. So, there as you can see, it just kind of goes in and then you kind of seed it a little bit, but it doesn't go all the way in, so, you know, just be aware of that, and then close her down. We are ready to go. Here we go with the ball seat it in there, bring her back and bang, okay, so we've taken a grams with chrony. She's a 449 with 143 grain. That seems a little low to me, but real quickly, we're just gonna charge it up. We'll show you how that's done. It's like I said, you pop the black cap off there, slide her in, fill it up to 200 bar, and you get about four good shots at 200 bar, so there you go, simple enough, right? So, the ball, so 450 feet per second, let's move to the, This is the ball, this is a 200-grain bullet here. So, let's take a look at that ready 555 so that bullet goes faster than round ball. The round ball is at 449, the bullets at 555, and it's 60 60 grams heavier so that's pretty cool. 555 if you think 555 feet per second at 200 grains at 671, you're looking at that would be a 200 foot-pound so even if you cut that cut that half which is 675 to 5 only 100 feet per second off, I mean, you're looking at a hundred and something foot-pounds doing the math in my head. 671 is where you get one times the weight of the pellet so 555 120 feet per second less so you're getting like a hundred and fifty hundred and twenty foot-pounds with that. That's crazy.

Here we go, let's take a look, so this is the pellet and it's 243 gram. There we go, let's see what kind of powers. This thing is putting out three hundred three hundred and fifty-seven feet per second with a 243-grain pellet. That is some serious foot poundage. Alright, guys, as you can see this thing has got power. It is awesome. Let's take you to the fun range and blow some stuff up, come on.

Alright, I'm gonna go with the hollow-point 200 grain. Here we go. Bottle. Let's try that watermelon. Are you ready? So, there it is again into the wood, a solid, I mean, it's like an inch in there. I missed the cinder block. Cinder block, you're not done. I mean that's a that's a solid chunk of concrete out of there. This thing is absolutely, that's wild, can't get over it, I mean, listen, this thing has got mass amounts of power, tons of foot-pounds, is it a little difficult to shoot, sure it is, it's a .45 caliber hand cannon so it has kick, it has, it's gonna throw your scope off depending on what you put on there, got to make sure you get the right scope, but this is the Evainx Rex P .45 pistol. You've seen the rifle. The rifle is absolutely amazing. The pistol is just awesome; it's fun, it's scary-looking, it's intimidating, and you can get it at Pyramyd Air. That's it for this Pyramyd Outsyder. I hope you guys had as much fun as I have. See you next time.