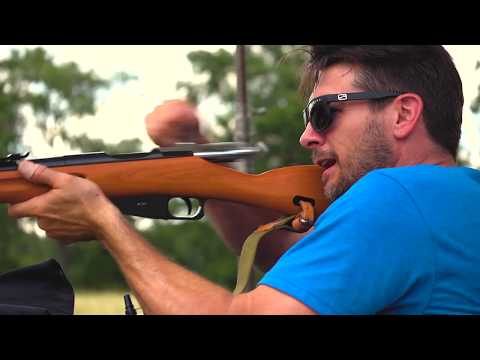 In the late 19th century, Russia developed a fabulous firearm that's still popular today. This is a faithful BB gun copy, but with a sawed-off barrel.

Sorry, okay, sorry, sorry, that got weird, but I just didn't have a knife and I really want some watermelon, oh there’s a little bit there too. Hey, welcome to Pyramyd Outsyder. Are you kidding me? I mean, if my gun’s got a bayonet on it, I'm gonna give something the old “get get get get get.” How do you not, right? It's got a bayonet on it, that's awesome. Let's talk about this. So this is the Gletcher M1944 or the Mosin Nagant M1944 which is the original gun. It's an old Russian legend gun. This gun was made from like the mid 1800s all the way through 1950 so this is a gun they used in World War II. These guns, the real version of this gun, is very expensive now so they say that, you know, if you get one of these that could go up in price as a collector's item, you know, if you're, if you're a fan.

Let's take a look at it here. It's got a polymer stock. It's not wood. It looks wood but it's not, it's a it's a polymer stock, but it still looks like the real thing which is which is very cool. It's got this dog collar strap here which you could, it's got the holes in there in the rifle where they originally were, everything I've seen it compared to, talking even to the Godfather, this gun is looks as real as the real 1944 carbine which is very cool, and if you're a collector, this is something that should be very interesting to you. It's got the bolt action. The way it works it's a, it's a single bolt action, so you cock it every time you shoot it. It is a repeater BB gun so let me just show you under here, so what looks like the magazine and and looks like the original kind of magazine setup on the actual gun, it just slides out and see that's where your co2 cartridge goes and where your BB's go, so you get 16 BB's in there. You've got your co2 cartridge, and it's kind of cool, it's got this little hex key right there for when you tighten it up. Now the BB’s are interesting because you have to bring this down and then you load them one at a time through this hole so you kinda have to hold it at a weird angle, slide one BB in, and they slide down, then when you're ready, don't forget to do this, so you slide this in, you know, and then once you put the magazine in, it's pretty cool because it's a bolt-action and it works so you pull back. Now, you won't actually see a BB go in because that's all happening internal in the chamber inside, but when you rack it, a BB goes in there, so you can't just keep racking if you don't fire cuz you'll just you'll put multiple BB's in the chamber. So, when you you're good to go at that point. For the safety, it’s safety's kind of interesting because, and you gotta be careful cuz you you pulls back just a little bit and you turn it, that lifts this bolt act a little bit, if you go too far it will throw the bolt back and it'll come back in, and you will be then cock the gun again, so you wanna be very careful about that, and then you just pop it back in when you're ready to fire. So, there's your safety and that's how it works. Be careful about loading two BB's.

Now, let's get through this cool little feature. At the bayonet, just put this guy back on safe, it has, you know, it has the the rear sights here that are you can adjust them for windage and elevation, it's got your front, your hooded front sight there which is good, it makes it pretty accurate, and then you've got this bayonet on the end which is, you know, when I first saw this I was like what in the world would you use it for, but you do instinctual, you go and you you stab fruit with it. It kind of makes it fun if you're gonna do some reenactment or, you know, just playing around. It's not really sharp but, you know, it's made of solid material and you just slide this up right here, fold it down, and it's like it's like there's no bayonet, and you can see if you look down, you can still shoot it with the bayonet out.

Alright then, here we go. Let's take a couple of shots and see what the M1944 can do. Love that, I mean, that is, and look at that group, I mean, that's it, that's a quarter-inch group, I mean, you know, I work ten yards away, I wouldn't be surprised if you could, you know, reach out a little bit further, but there's another, you know, three three .378 a little bit lower, so my co2 might be it might be losing out a little bit, but, gosh, great accuracy for a BB gun, very legit, very, very well-made. Let's go to the fun range shall we and take a look-see at some target shooting. Let's do it.

I'm trying to take off. Oh, no helicopter. Red guy? Oh, red guy. Topical guys, the bunker, oh, I'll get that one. Jock on the right? Oh, nice. Let's see we can do with these little orange rings, shall we? Bang. Bang. Bang. I win. Bang. Hey, oh come on! I'm out. Here's a load this sucker up again. The bottom ones consider those hit. They're hit. I want to try downrange a little bit. I've got some Dr. Pepper cans at like 20 yards. Let's see if they got the power to pop those Dr. Pepper cans, shall we?

That's in 20 yards with a BB gun. Boom, that's what I'm talking about! Guys, this thing is awesome. The M1944, it's the Russian legends, oh my gosh, fantastic, okay, I know you're thinking I'm almost done, it's bayonet time. Let’s roll and a field target. I lost my mind a little bit there, but I mean, it comes with a bayonet. That's awesome, guys. That's it for this episode of Pyramyd Outsider. We're outside, we're having fun. You guys get your air guns, go to pyramydair.com buy some air guns and have some fun. See you next time.