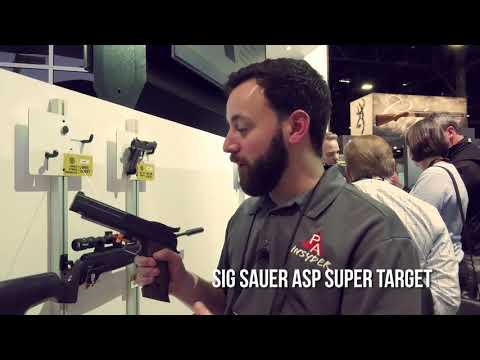 The Pyramyd Insyder was all over SHOT Show 2018 scouring the floor for the latest air rifles and air pistols from cutting-edge manufactures like Air Arms, SIG Sauer, American Tactical, and Anschutz.

Welcome to SHOT Show 2018 guys. Checking out some brand new product here with the Pyramyd Insyder. This is the Air Arms S510 TDR FAC. So that means it's the same TDR package you know and love with the brand new side lever breech, as well as a fixed suppressor on the end to keep things nice and quiet. Looks like the gun also does come with a soft touch cheek piece now. And, of course, as you guys probably have seen if you're a fan of this TDR rifle. Just unscrews at the back here and you can see that separation starting with the stock there and you can actually put this up in the case, in a backpack, whatever you want, before you go hunting. You leave your scope on it, all you got to do is mount the buttstock and you're good to go. You have the hallmark features like the adjustable power here with the transfer port adjustment, ten round magazine in 177, 22, and 25, and again updated to that sidelever breech with the walnut stock. This gun, for those of you guys that are looking to get out and do some hunting with something that's super lightweight, check out the S510 TDR in 2018.

That this is going to be a regulated S510. We've been waiting for this one for quite a while guys, very cool. And a new update on the .25s in particular, this is going to be a bit more powerful than our standard S510s have been in the past. They're saying 44 foot-pounds of energy, which puts it right up there with your .25 cal Marauders, your Atamans, a lot of those nicer higher power .25 cal guns. The gun is going to feature your fixed suppressor up at the muzzle end, which is of course connected to a full-length shroud system, and we're sitting it into a beautiful Minnelli Ultimate Sporter stock. This one's going to be the black soft touch, so you know you get the adjustable cheek piece, you get the rail underneath, and that just awesome soft touch feel guys. Also going to be available in laminate, probably a walnut maybe a beech, who knows we'll see, but this one I have to get my hands on in 2018 guys. Stay tuned with the Insyder you'll be seeing this one at some point down the road.

Here at the Sig Sauer booth the SHOT Show 2018. Brand new breakbarrel the ASP20 now this guy's got a lot of cool new features. It does have a pretty high price point on it for a break barrel. but I do think it's going to command that price point. So starting at the front guys we got a fixed suppressor on the end of the barrel here, so that's going to keep your shots quiet. The first real key point here we're gonna touch on is this lock-up system, now this is all machine together, so when they make this, this is not going to move. Barrel droop, any side-to-side wiggle, that should be things of the past as far as this gun is concerned, which are going to make it a very appealing option for those of you looking for the most precision out of a breakbarrel. Of course, we have a Picatinny rail system and it is a gas piston inside of here. Cocking effort is going to be around 35 pounds, very very smooth cocking stroke. And the trigger, guys the trigger they are touting. They did let me try it out here. It breaking at about two and a half pounds, feels very nice to find first second stage, and an ambidextrous safety. I was really surprised to see this, you have access to it from both the left hand and on the right-hand side there, which is a neat little feature we don't see on very many break barrels, if any, and of course rounding it out at the back of kind of a target ish style stock here. And it handles really nicely, feels good. Price point on the synthetic version, this is the wood here, price point for the synthetic's going to be 399 and this scope actually is designed purposefully for air rifles, so you know it's going to stand up. Lifetime warranty on this from Sig. With a really nice reticle, you guys are definitely gonna want to check this out. This is a 4 to 12 by 44 beautiful reticle and this one is also going to be available probably around the $350 price point, so very very exciting stuff from Sig here.

We've just showed you the ASP20. Now that gun, made in America, let's show you something that's made in Italy but I'm very very excited about. We don't see a lot of kind of match pistols or even any kind of well single stroke pneumatics anymore these days but Sig's bringing one to market guys. This is the ASP Super Target, now this is modeled after one of their firearms, it's got a very 1911's look to it. Beautiful, what look to be walnut grips on it, and this is an over lever single stroke pneumatic airgun. This is awesome, check this out, so you pull back on the hammer that's going to release your over lever here, and as you can see here guys, we load it right in there, right into the barrel, this is a 177 of course. You have your piston assembly here. Let me go ahead and close it back up and then we're good to go try that trigger out. Pretty nice and lightweight, a little more travel than I'd like, but I expect that's going to be fully adjustable guys. You don't have a price point on this one quite yet but looks very very intriguing for those of you target shooters out there, so stay tuned for this one, probably third quarter of 2018.

Hey guys Tyler here with the Pyramyd Insyder. We're here at American Tactical on the SHOT Show floor 2018 checking out some brand new guns. Now, this is the Nova Freedom, there's not a lot known about this gun, we saw it in a one Germany last year. This is basically a multi-pump PCP so you're gonna be able to pump this, they're saying 40 times and get up to a 1000 feet per second in 177. 40 times over 17 shots, so you have a pressure gauge on the side and here's the kicker guys, adjustable power. You got a high power setting and a low power setting, side lever action, 11-millimeter dovetail, it's coming with open sights and again the multi-pump that's gonna be capable of doing multiple shots. Really cool, we're gonna be looking to hear a lot more about this one later in the year.

We're here at the Anschutz booth taking a look at their brand new field target rifle. This is the 9015 HP and as you can see this thing has more features than I've ever seen in any gun ever. If you're a field target shooter like me, this is a gun you are going to want to have to get to the top of the competition. This gun, obviously precision barrel, that's a no-brainer, you have an adjustable four end hamster here for putting on your knee. Side lever action, super smooth, and a dry fire mechanism here, and just set that, you can try that trigger. The 5065 4k trigger, one of the best on the market if not the best. I've been testing this gun for roughly the last six months and I have got to say it is phenomenal. You're definitely gonna want to check this one out. The adjustability in this gun is crazy. You can swivel the buttstock, you can move everything up and down, left and right, every which way to make this gun fit you like a glove. Check this one out on pyramydair.com right now.