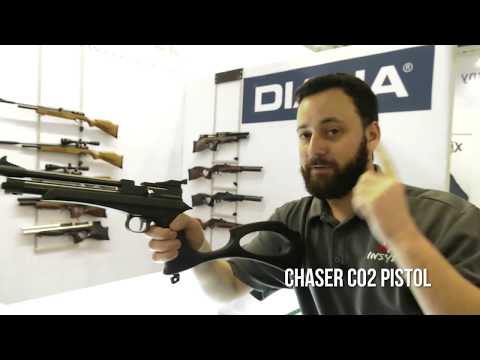 The Pyramyd Insyder was all over SHOT Show 2018 scouring the floor for the latest air rifles and air pistols from cutting-edge airgun manufacturers like AirForce, Benjamin, Diana, Hatsan and RAW.

Hey guys we're here at the Air Force booth SHOT Show 2018 looking at the new Texan Carbine. This guy's going to be available in 308, 357, and 457. 24 and three-quarter inch barrel, I'm very excited to try some air bolts in this. You know we put together our own little Texan carbine on the Insyder a few months ago, but this is gonna be from the factory ready to go. Another new announcement on the Texan line, you got the SS coming in 308 and 357 as well, in addition to the 457 that we've already looked at. So very cool new stuff from Air Force but there's more, let's check it out.

Hey guys, so still at the Air Force booth, here's the new big announcement. Rapid air weapons out of Tennessee so that means we are going to be seeing American-made, and these are currently American-made, but American-made rapid air weapons guns through Air Force. On top of that, they are also offering the rapid line which harkens back to the old Theobin days in England. These are available in 177 all the way through 35 caliber. These are some of the finest built guns you will find anywhere in the world. Powerful, accurate, they do just about whatever you want to do, they got a ton of features. You got carbon shrouds, electric shrouds, carbon bottles, different stock configurations. This is going to be one to watch for in 2018. Very excited about this one. We're gonna head out onto the floor and see what else we can find. That's about it from the Air Force booth, we'll catch you in a few minutes.

Alright guys we're here at the Crosman booth 2018 Shot Show. One of the big new things they got coming out here, this is the Benjamin Traveler Compressor. This is going to be able to fill your guns from 0 to 4,500 psi, it is capable of that. For those of you guys with the higher fill pressure guns, they're telling me this does a Marauder from zero to full in about eight minutes or Discovery in like three and a half. So you have the compressor itself we can see, got a filter, a gauge here, you obviously got your quick disconnect on the end of the hose, looks like we got fan cooling. Guys this looks pretty simple, this is going to be plug and go. So definitely one we're gonna keep an eye on here in 2018, the Benjamin Traveler Compressor. We got a couple other things here at the Crosman booth to check out, stay with us.

Got the Benjamin Fortitude here. This one has sent a few waves through the industry when it got announced. A very exciting new gun from Crosman Benjamin here. So basically what we're looking at guys, you're looking at a Maximus stock, looks like a Maximus Discovery trigger and air cylinder, except there's a regulator inside, so you're talking about getting very consistent and also a ton of shots. They're saying up to 70 or 80 and 22 caliber which is really impressive, and then it looks like we have basically a Marauder top portion of the gun here so. Breach in shroud assembly as well and they're talking about a retail price point of $300 on this guy, so this is definitely going to be out there to contend with the Stormriders and the Gauntlets of the world, and obviously bearing that Crossman Benjamin name, we're expecting it that it's going to be very very good, very reliable. 3,000 psi fill, so a little bit different than our Discovery or our Maximus here, but featuring that same trigger. We know what we're gonna get out of this guys, but I can't wait to test it. This one's gonna be one to watch. Very lightweight gonna be really durable. This gun may very well take that $300 price range by storm here. Very excited to see what this gun can do.

Alright guys last thing we're gonna check out here at the Crosman booth, this is the new mag Fire. This is a multi-shot break barrel so Crosman's coming to that party as well now. This is actually really interesting. So you have a kind of pistol grip in traditional almost AR M4 style buttstock here with a deep forend which is kind of interesting as well, make offhand shooting a little bit easier, but really the meat and potatoes of this gun guys, is this multi-shot mechanism. So you're gonna break the barrel down, and then when you get it back up, you are actually going to work this bolt-action system here on a ten round magazine, looks like a Marauder mag to me. So that's gonna be very interesting, certainly a lot quicker follow-up shots than you're gonna get out of a traditional break barrel. We're very excited to see this one come through. This one we didn't even know about beforehand, so it should be a very exciting product in 2018. We're gonna definitely test this one out for you on the Insyder guys, stay tuned.

So sadly we did not make it to the Hatsan booth with enough time in the day to spare. That said Hatsan's got a bunch of new products that we definitely need to take a look at. So on top of three new guns that we're gonna cover here, they also had a compressor, as well as a couple hand pumps. They really come out with a full line of HPA equipment here which is really exciting to see from Hatsan. That said, the three guns are gonna want to look at here, the Hercules Bully, the Flash, and the FlashPup. Now the Flash that you're seeing right now very impressive little guns, six pounds they're saying up to 40-foot pounds in 25 caliber and somewhere in the mid to high 30s and 22. We're gonna have one of those on the Insyder to review for you guys soon which we're really excited about, but they also came out with that FlashPup that you're seeing now so basically same action just set in to a bullpup stock, and then you got the Bully that is a bottle version of the Hercules in a bullpup stock. This thing is going all the way up to 45 caliber, tons of shot count, and they even told us that they're gonna make the cocking effort easier on it, which was a big complaint on the original Hercules, so we're really excited to see these new guns from Hatsan in 2018.

Hey guys SHOT Show 2018, we're back with Pyramyd Insyder. We are at the Diana booth, some very cool new stuff from Diana and Germany. This is the Skyhawk, their bullpup gun. Now it's a little interesting, I know this might look familiar to some of you guys, this gun is actually going to be fully assembled in Germany with a lot of upgraded features, obviously, you can already tell this is a Manelli stock. They're gonna have a couple different stock styles, a couple different action finishes, but I can tell you this is regulated, should be very powerful, very quiet. I'm really looking forward to checking this one out. Nice new bullpup offering from Diana and also for those of you that are hardcore about getting a fully German made gun, we have the P1000 Evo 2. Now this is going to come in a couple different stock configurations, should be very very accurate, I believe it's like a twelve or fourteen round magazine. Beautiful looking wood on these guns here and of course they're gonna be very accurate, regulated, very excited to see these in 2018.

Hey guys back at the Diana booth, the Bandit pistol. This is going to be one to watch for in 2018. You have a PCP pistol, this is totally very comfortable, ambidextrous, so left-handed right-handed shooters, not gonna have a problem with this, this is going to have a magazine, as well as a single shot tray that you see here. We got the target site option here but with an 11 millimeter dovetail, looks like this comes off no problem, so you're going to be able to mount an optic on it, and I'm hearing that they're gonna have a lot of updates for this as well going forward, including a suppressor, and probably, maybe, some stock options too, so we'll definitely be on the lookout to see more from the Diana Bandit in 2018.

Guys back at the Diana booth. Now this is a new, updated version of the Stormrider obviously you've seen our review of it, it was a great gun then, Diana's making it better, they are committed to making their products better. We're gonna have a fixed suppressor on the end of it here as well, and this is the most exciting part for me, an updated trigger guys. This is going to be a two-stage adjustable trigger and I will just show you here, I cock the gun back. So very very light, first stage travel comes to a clean wall, solid break. That's feeling like pound and a half to me, maybe two, a very very nice trigger on this model here. We're very excited to get these in, but very cool. They're also working on a regulator and a 25 caliber version. So the Storm Rider's going places stay tuned in 2018.

We were about to leave the Diana booth and then they told me there was one other thing I had to see. This is the Diana Chaser, this is going to be a co2 gun suppressor. Looks like you got open sights here with the ability to mount an optic on an 11-millimeter dovetail rail, single shot tray with a magazine option, and of course, this nice little lightweight carbine stock. Guys this comes into the shoulder really nice, very lightweight, this is going to be a great backpacking gun and, again, 112 grams co2 cartridge, so you're gonna be looking at, you know that summer pesting season, this is exactly what you're going to want to have. They're talking about a pretty low retail price point here $50-$60 bucks, this could be a very very hot item coming in 2018. Check it out soon.