Helpful info for working with precharged pneumatics (May 2009)

Here's some info that every PCP shooter should know. The first part is about high-pressure air vessels. The second part deals with something I call the "bathtub" curve of performance.

If you want to use precharged pneumatic airguns, you ought to know something about air pressure and how it works. Instead of the scientific definition, let's speak plainly. A bar may be thought of as one unit of atmospheric pressure. The time-honored explanation of one atmosphere of pressure, which is supposed to be the pressure at sea level on a "standard day," is approximately 14.5 pounds per square inch (psi). That number is only theoretical, since air pressure varies constantly all over the world and there is actually no place on earth where the sea is level. But by using a convenient number like this, we can discuss air pressure. So, one bar (from the Greek word baros, which means weight) is one atmosphere or 14.5 psi.

Why it matters
Air pressure can wear out a pressure vessel through the simple expansion and contraction of the vessel walls. You know, for example, that a rubber balloon eventually fails from being inflated and deflated many times. If you don't know it, get a balloon and see how many times you can inflate it before it bursts.

The air pressure in a balloon is around 100 psi or less. What is the air pressure in a modern airliner? Much less, as it turns out. An airliner is pressurized to a certain pressure (equivalent to perhaps 8,000 feet above sea level), but if it flies at 40,000 feet, the air pressure on the inside is much greater than the pressure outside. Not so great as 1 whole bar, but due to the vast surface area of the airliner, tremendous expansion takes place when the plane ascends and contraction occurs when it descends. This works the metal in the airplane to a greater degree than almost anything else it encounters, so we speak of an airplane's life as measured by so many pressure cycles.

A scuba tank is much smaller than an airplane and can, therefore, hold more pressure. But, it also expands under pressure and contracts when the pressure is released. Every five years, a scuba tank must undergo a test that measures the remaining elasticity to determine if the tank should continue in service. After all, we don't want a scuba tank to pop like a balloon or an airplane--do we? In fact, a scuba tank explosion is so dangerous that the hydrostatic test is done with water rather than air. If there's a failure, the pressure drops instantly because water does not compress like air.

Air pressure can wear out a pressure vessel through the simple expansion and contraction of the vessel walls.

Smaller pressure vessels
Your airgun filler hoses are also pressure vessels while you use them. They have a very small surface area, so they can take a lot of pressure; however, air hoses are not made as robust as scuba tanks. Microbore air hoses are even smaller inside, so they can take even higher pressure; plus, when they're bled to disconnect from the gun, not as much air is lost. All air hoses are built to take some multiple of their standard operating pressure and, yes, they do blow up from time to time--as do scuba tanks, balloons and airliners. 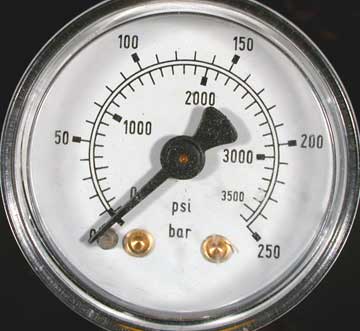 A manometer (pressure gauge) for airguns commonly reads both psi and bar. 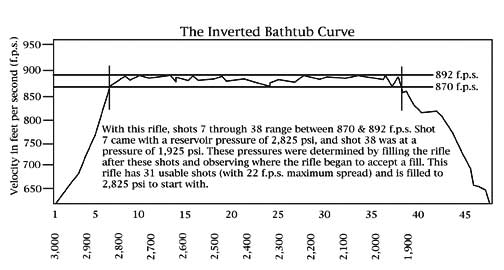 Let's explore a common phenomenon--the inverted bathtub curve. This phenomenon helps you set up your PCP airgun to get the greatest number of shots with the least amount of deviation. You will need an accurate chronograph to do this.

All PCP airguns lose air pressure with each shot. The air valve exhibits a tendency to compensate for the pressure loss by remaining open an instant longer as the pressure drops. The valve spring initiates the closing of the valve, but the internal air pressure of the reservoir is what actually closes and seals the valve. How fast it does it is a function of many things:

There can be other factors, but these are the basics. So, when you get a new, unregulated PCP gun, it's nice to discover its optimum performance curve. Fortunately, this curve remains relatively flat for a long span of shots. It's called the inverted bathtub curve, and it gets its name from its shape.

A regulator does not give a tighter spread of velocities within a usable band, except indirectly. Because the shooter can select the pressure at which the reg operates, it might be possible to select a pressure the valve likes, and your velocities will, therefore, vary less.