Ask any airsoft enthusiast what the best brand is, and you’ll get the same answer every time: Tokyo Marui. They have earned that reputation because they produce airsoft guns that are RELIABLE, REALISTIC and FUN!

A tricked-out Colt M1911A1 that looks amazingly realistic!
The Hi-Capa 5.1 is a tricked-out M1911A1 Colt widebody. It has many of the features of a good slicked-up carry gun, yet it retains the look of the basic pistol. It weighs 33 oz., which is about right for a Commander-sized gun but a few ounces light for the full-sized 1911 that it copies. There is a lot of metal in the gun, including the frame – but the grip frame and slide are plastic.

It operates on green gas, which is injected into the base of the magazine. The gas not only powers the BB but also cycles the gun’s slide, cocking and loading it for the next shot. So this is a true semiautomatic handgun.

The magazine holds 30 BBs in a double-stack. But where other airsoft guns use a funnel to pour in the BBs, this magazine requires them to be inserted by hand, one at a time. I think the reason for this is Marui’s commitment to precision. This gun won’t “vomit” BBs all over the place as it fires, because they are retained in the magazine under spring tension at the mouth.

It takes a while to load all the BBs,
but this gun holds them securely
until all are fired.

This stock gun packs a lot of power!
Green gas guns typically have more power than most spring-piston guns and many stock electrics, as well. This one has a stated velocity of 270 f.p.s., and the recommended BBs should be the heavier ones, weighing 0.20 grams to 0.25 grams. So, it shoots heavy BBs fast. That makes it a very powerful airsoft gun, and you must use caution and safe gun handling at all times.

With the gun you get a cleaning rod that’s also handy for removing stuck BBs and drifting out the takedown lever. There is also a Weaver-style mount for a laser under the frame. To install it, remove the two frame knockouts so the self-tapping screws have a place to attach. Marui included the correct drift pin for this job as well.

Marui loaded lots of Colt features into this gun
All the important controls on this pistol function as expected. The rear sight adjusts for both windage and elevation, the front sight drifts in a sideways slot and the safety is ambidextrous. The grip safety works as it’s supposed to, the magazine release is identical to Colt’s button – even the slide comes off the gun when the takedown lever is drifted out through the side of the frame!

Maruis are for serious shooters
While the common view is that airsoft guns are cheap, this is not true of the better brands. Tokyo Marui is at the very top of the heap and should be the most expensive of all – but that’s not the case. This pistol sells for $158.95, which is pretty fair for an airsoft gun that is very well made and has a surprisingly similar look and feel of an American firearm icon. If you know airsoft, the name Marui says it all! 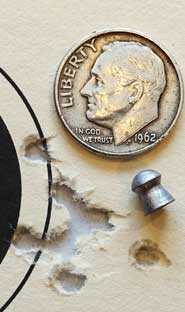