The American BB gun is recognized everywhere and the Daisy company along with it. Perhaps no single model is as well-known as the Red Ryder. Because many parents buy BB guns to teach their children the fundamentals of shooting safety, I am devoting today’s posting to that gun.

Safety first!
The movie A Christmas Story revived the popular saying, “You’ll shoot your eye out!” That dates to the late 1920s when Daisy changed from lead air rifle shot to steel. Suddenly, guns that no one gave a thought to were injuring young shooters with rebounding BBs. A lead ball striking a hard surface deforms and bounces, if at all, away from the shooter. Steel does not. It resists deformation, rebounding straight back toward the shooter with much of its initial velocity intact. So, safety is the first concern for anyone shooting BBs.

Do NOT use a pellet trap for BBs! Use a BB trap!
Pellet traps are made of steel for lead pellets and will cause the worst kind of rebounds if used with steel BBs.

Shoot only into a trap that prevents rebounding. This can be a commercial trap or a box filled with crumpled newspapers and backed by a thick, tough carpet. Two traps that I like a lot are Daisy’s own Sound Blaster Target, which is a perfect match for the Red Ryder, and Crosman’s model 850 BB/Pellet trap.

The Daisy Sound Blaster makes several distinctive sounds, depending on where the BB strikes the target, so the shooter gets immediate feedback. The Crosman 850 has several tough ballistic cloth screens that prevent rebounds and keep stray BBs off the floor. For that, alone, they are well worth the price. Be sure to back either commercial trap with a large piece of carpet to catch stray BBs.

Everyone wears eye protection
As a further precaution, everyone in the vicinity of the gun should wear either safety glasses or shatterproof eyeglasses. The safety glasses cost very little and protect your eyesight, which is priceless.

The stock may have to be cut down
For smaller children, the Red Ryder stock is too long, so it may need to be cut down. To find the correct fit, have the child stick his arm straight out to the side and bend at the elbow with the trigger finger extended and pointing up at the ceiling. With the butt rested on the inside of the elbow and the rifle also pointed toward the ceiling, the trigger finger should go about a half-inch past the trigger.

If you don’t want to cut up a fancy Red Ryder stock, consider buying the Daisy Model 105 Buck. It’s less decorated, less expensive and has the same solid wood stock that lends itself to alteration.

For older children, Daisy’s model 95 Timberwolf is a larger, more powerful gun that features Daisy’s widebody frame. It’s attractive and will please the bigger kids. Daisy has discontinued this model; when stocks are gone, there will be no more.

BB guns are a great for teaching shooter safety, as long as we follow safety rules! 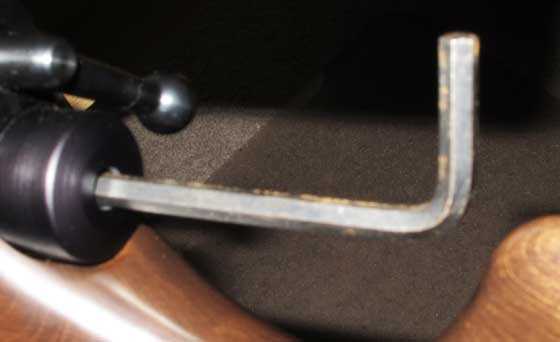 In the bag – UTG Computer Bag