The Pioneer BB76 BB gun from Ultra Hi
was made to look like a Kentucky rifle.

There are some strange BB guns out there, and today’s example is one of them. The Ultra Hi Pioneer was made to cash in on America’s Bicentennial celebration. The date of ’76 referred to the Bicentennial – not to any date that a firearm like this might have been produced, which was from about 1835 to 1900.

Look for them new in the box
Sales must have been disappointing for this gun because so many are still new-in-the-box today. But, the airgun community has now recognized this model as special, and you can expect to pay $200 for a good one (that’s like-new in the box). A shooter will be between $100 and 150. Ten years ago, they were selling slowly at $75 to 100 because nobody knew what they were.

It’s powerful and feeds ammo flawlessly!
The Pioneer has a short underlever that’s pulled down to cock the gun. Cocking is light, yet this BB gun is as powerful as the most powerful Daisy number 25 ever made. That puts it in the 375 f.p.s. region with steel BBs. However, conventional BBs are too small for the bore and they scatter like a shotgun at close range. Try three inches at 12 feet! For best accuracy, try 4.4mm lead balls. Groups will shrink to less than one inch, again at 12 feet. 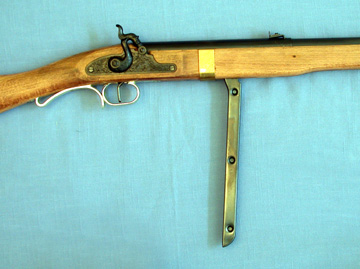 An underlever is pulled down to cock the gun,
then returned to its place in the bottom of the stock.

The magazine is a copy of Daisy’s 50-shot forced-feed mag from the number 25 pump. It works the same way and feeding is flawless in my gun.

Getting ready to shoot
After putting a loaded magazine in the gun, lower the cocking lever until it cocks the action, then return it to its stored position. You might think the gun is ready to go, but it isn’t. You also have to cock the external hammer before the gun will fire. This is a safety feature that also makes this BB gun that much stranger. The hammer is plastic and it cocks so easily you’d swear nothing is happening, but it really does make the gun ready to fire. 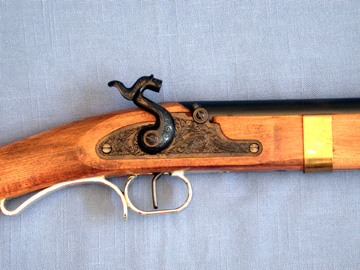 Once the plastic hammer is pulled back
like this, the gun is ready to fire.

The hammer is also the gun’s one weak design spot. I’ve seen guns that wouldn’t fire at all because someone had done something to the hammer. I’ve also seen some that fired independent of the hammer. I always thought the former owners had forced it in some way and broke whatever is inside. Being plastic, it won’t stand much abuse. If you follow the procedure I give here, the gun works fine.

This is a big gun!
At 44.5″, this is a HUGE BB gun; at 4 lbs., it’s not that heavy. It could stand a few more pounds to steady it in the offhand position, but smaller shooters can also appreciate the gun at this weight. The light cocking effort makes this gun available to everyone.

If you want one, you’ll have to watch the auction sites and classified ads. Or, go to a good airgun show and you might get lucky.