Home > Blog > Education / Training > Why doesn’t my gun shoot where the scope looks?

Why doesn’t my gun shoot where the scope looks?

This is a very tough question, so please stick with me as I try to make sense of it for you. I’m not trying to confuse you, but there are so many things you have to know to understand this problem.

1. The bore of your barrel doesn’t go through the center of the barrel!
Shocked? I hope so. Man has yet to discover how to put a hole exactly in the center of a long tube. The easiest way is to drill the hole first, find out where it is then cut the barrel in a lathe until the outside is concentric with the inside! That’s been done for custom barrels but not for production guns. SO, that barrel that you THOUGHT was mounted straight in the receiver is probably looking somewhere else. Read The Bullet’s Flight From Powder to Target by F.W. Mann to learn more.

P.S. Turning the barrel between centers on a lathe is a popular fix for this problem BUT IT DOESN’T WORK! What it does is ensure that the hole at the MUZZLE is centered, with no assurances of where it is anywhere else. I have cut barrels at varying spots along their length and found their bores up to one-quarter inch off center! That’s extreme, I admit, but it illustrates my point.

2. Your barrel probably isn’t centered in your action!
In fact, it’s a safe bet it isn’t. Unless you’ve spent a lot of money having a machinist center your barrel in your action, it probably isn’t centered. The design of most firearm actions makes it almost impossible to center or align the barrel this precisely. Most airgun actions do, too. Hold on, ’cause it gets worse!

In The Bullet’s Flight From Powder to Target, the author built a special cylindrical action and attached it to a concrete pillar sunk deep in the ground. It stood 26 inches above ground and 40 inches below. He called it his “Shooting Gibraltar,” and with it he proved that no barrel is ever bored perfectly straight. He shot all of his test shots from this incredibly solid bench. He used barrels made only by Harry Pope, the most famous barrelmaker that ever lived. The best of Pope’s barrels were shooting ten-shot groups under one-half inch at 200 yards with black powder.

Is there any hope?
Yes, of course. All I’ve said thus far is true, but that doesn’t mean you can’t mount a scope on a gun. It just means that the Hollywood version of a rifle coming out of a box and the scope being snapped into place with perfect zero is pure fiction. Remember how long it took NASA to get the Hubble Space Telescope up and running? Well, your job is easier, but there is still work to do.

This posting was not about how to mount or zero a scope. It’s purpose was just to inform you of what you have to overcome when you do the job.

The problems I have mentioned here can be overcome with good scope mounts and a little patient work. 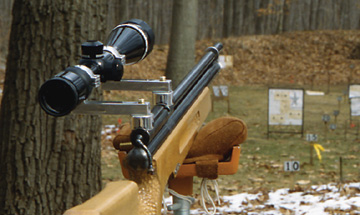 If someone can compete and win with a scope mounted like this, your job is easy!
Share
166 / 4624