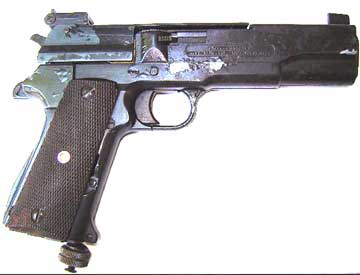 A true semiauto
As you are aware, real semiauto pellet pistols are not common. The Drulov DU-10 is one, and there are a couple of five-shot 10-meter target pistols, but pellets don’t lend themselves to being run through gun actions rapidly. This has kept their development at a minimum. The model 451 has a strange circular magazine mounted on top of the gun, and it rotates in the horizontal plane rather than vertically, which is conventional. Like the SA-6 revolver, pellets are loaded skirt-first into the six chambers on this magazine, which makes this the world’s only muzzle-loading semiautomatic air pistol.

Single-action only
Like the M1911A1 it copies so closely, the 451 must start with the hammer cocked. When it falls, it strikes open the firing valve, sending gas up the hollow tube that also acts as an axle for the cylinder. The gas pushes on the pellet in the firing chamber, sending it downrange, but a small portion of gas enters a secondary passage and pushes on a valve that impacts against the slide, shoving it backward. The slide cocks the hammer on its way back, then runs forward under spring pressure and advances the cylinder for the next shot. It all happens so fast that it’s almost impossible to detect anything beyond the noise and recoil from the shot. If the hammer fails to cock, you must recock it by hand, as this is a single-action pistol and the trigger will not cock the hammer.

The shooter feels an impulse of recoil from the weight of the moving slide, and the trigger is very light, needing only to restrain the hammer for firing. Gas pressure and springs run the rest of the operation. Actually, the sheetmetal slide is not full-sized. It runs about two-thirds of the top of the pistol, but it’s heavy enough to cock the hammer and to impart the feeling of recoil.

In its day, the 451 had no equal. It was the only pellet pistol with a realistic recoiling action. Accuracy was very good, but gas usage was the pits! Because so much gas was used for the blowback facility, the 451 got only about 18 shots per powerlet. Compare it to the 600 model, which got 30-33 shots per powerlet. That number was low, too, but compared to CO2 air pistols made today, the 451 is abysmal. 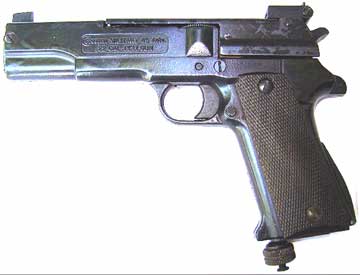 Except for the CO2 adjustment mechanism on the bottom of the magazine well and the lump in the middle of the slide, the 451 looks very convincing.

Difficult to repair
As long as it works, a 451 is reliable. When it gets out of order, it’s a bear to repair. Not all repair stations can fix one, so check before sending in your treasure. A common problem was the nylon piston that actuates the slide – it will start leaking and lose energy. When that happens, the gun will fail to cock. That repair is an easier one than tearing into the whole gun.

If you want a vintage gun like this, you’ll have to watch the auction sites and be prepared to pay for it. They do turn up at airguns shows, but the prices are high there, as well. If you just want a semiauto pistol you’re a lot better off with a Drulov or even a Crosman 600. Some of you will absolutely HAVE to own the rarest of all Crosman semiautos, now that you know they exist! 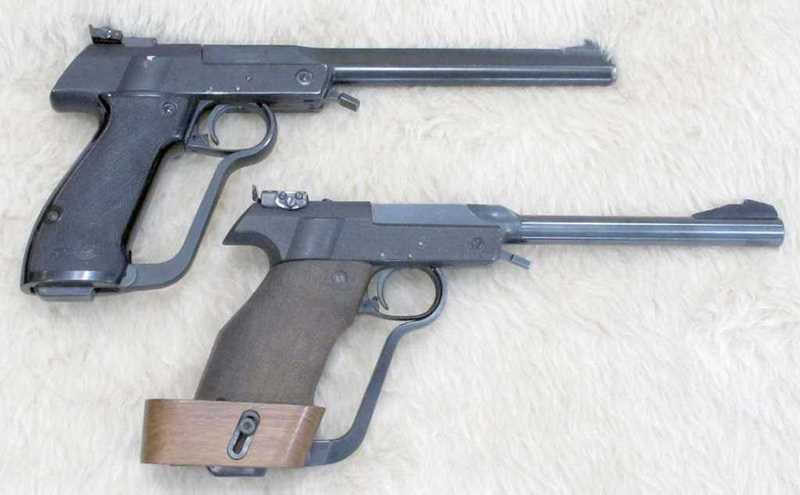