If it isn’t accurate, it isn’t anything. So, today, I’ll test the Rocket pellets in a couple of rifles of known accuracy. A reader asked if the lead in the Rocket is pure. I believe it is, based on how easy it was to remove the BB from a pellet.

Test guns
I selected a Daystate Harrier and a TX200 Mk III for this test. Both are known to be very accurate air rifles, and both have the power to handle the heavier Rocket pellet. Because of the 9.5-grain weight, I did not do any testing with air pistols. The point of the test was to determine potential accuracy, and for that you need distance. Air pistols are not powerful enough to properly stabilize heavier (longer) pellets at longer ranges.

Daystate Harrier
My Harrier is a very accurate .177 that I’ve used in field target matches for many years. It will group under an inch at 50 yards on a good day. I shot groups with both Rockets and with Beeman Kodiaks, with Kodiaks being the most accurate pellets for this rifle. Kodiaks averaged 872.4 f.p.s. and Rockets averaged 893.4 f.p.s., for 17.92 foot-pounds and 16.84 foot-pounds. respectively.

The test
The best distance I could get on testing day was 33 yards. The wind was relatively calm, but there were some breezes I had to wait out. I did not shoot great bunches of groups and select the best. Each group is the only one I shot that day with that pellet. 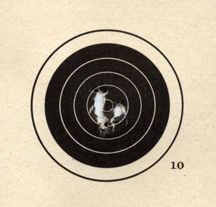 My Daystate Harrier likes Beeman Kodiaks. This is about a 0.30″ group of five.

The Harrier clearly did not like the Rocket pellets. It threw them all over the place, but kept nearly the same zero as for Kodiaks, which is interesting. It shifted left only a small amount.

The Harrier does not perform well with the Rockets. This group is slightly larger than one inch.

TX200 Mk III
Sometimes one gun will shoot a pellet real well, while another will not, so I always try a new pellet with at least two guns. This time the TX proved the wisdom of that philosophy, as it shot noticeably better with Rockets than the Harrier. It’s a little less powerful and, of course, a springer rather than a PCP, so the difference must be in there somewhere. It averaged 812.6 f.p.s. with Kodiaks and 869.1 f.p.s. with Rockets, for 15.55 foot-pounds and 15.94 foot-pounds, respectively. 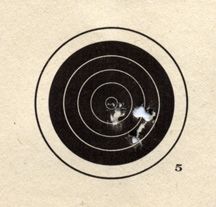 TX200 does very well with Beeman Kodiaks, though it likes 7.9-grain Crosman Premiers best of all. A TX is easier to shoot than most spring guns, because it requires less holding technique. This five-shot group measures about 0.37″. 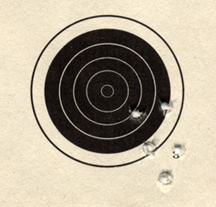 Not too shabby for a two-part pellet like the Rocket! This groups measures close to 0.75″. Notice that the aim point dropped a little and shifted to the right.

Is my test exhaustive? Obviously, not. But, I’ve tested enough pellets to recognize their performance potential from a small sampling like this. Had I shot at 40 or even 50 yards, the groups would have been larger and the performance of each pellet and airgun more dramatic. This test tells me what I need to know.

Conclusions
1. The Gamo Rocket does indeed generate more shock than a Beeman Kodiak. That is significant because the Kodiak is a trusted hunting pellet.

2. Though the Rocket is not as accurate as the best pellets, it is capable of acceptable groups in some air rifles. Therefore, it is worth trying.

3. The Rocket sells at a premium price (over $3.00 for 150 pellets). Because of that, it should only be used if there is a clear advantage of some kind.