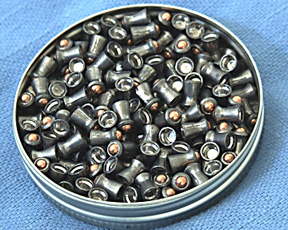 Gamo’s new Rocket pellet is tipped with a steel ball for better penetration and shock. B.B. will put it to the test.

Reader JDB asked for this report. The Rocket pellet from Gamo is a steel-tipped lead pellet. This type of pellet has been marketed for several years, first in the UK and now in the U.S. Daisy sells them and now Gamo has thrown their hat into the ring. I have always considered these to be gimmicks, so this will be an opportunity for me to see if my predictions of poor accuracy and mediocre shock and penetration are correct.

A STEEL tip? Why?
Gamo advertising claims maximum shock and enhanced penetration. I may not be a ballistics expert, but I am both a shooter and a handloader who knows that penetration and shock are at opposite ends of the performance spectrum. And, they are directly linked, as in “greater penetration equals less shock.” For penetration, a projectile has to retain energy as long as possible, carrying it deep into the target. To generate shock, a projectile must transfer energy as fast as possible to the target. These are mutually exclusive goals. Bulletmakers have worked for decades to offset this relationship, because it affects their product so much.

So, why do airgunners need a steel tipped pellet? Do we shoot through armor? The whole idea of steel-tipped pellets seems to be a solution for which there is no problem. However, I’m going to keep an open mind until the test results are in.

Rocket pellet is flanked by conventional BB on the right and a steel ball from the pellet on the left. Note how much smoother the ball appears, compared to the BB.

Not a BB!
At first glance you might think the tip of a Rocket pellet is just a common BB, but it isn’t. It’s much smaller than the traditional airgun projectile. Yet after examination under a magnifying glass, it appears to be made just as well as a modern BB, which raises another question. Why go to the trouble to head, finish and plate a steel ball, then attach it to a lead pellet MECHANICALLY – not with glue? What extreme benefit does this pellet possess to go to all that trouble? I was intrigued.

The one steel ball I removed measured 0.1186″ – very close to the size of a Daisy .118 BB that fits the .118-caliber Daisy Targeteer and all the Bullseye and Sharpshooter catapult pistols. I measured a vintage Daisy .118 BB to compare, and it was just two-thousandths smaller and not nearly as well-made. In fact, under a 10X loupe, the Gamo ball appears as uniform as a ball bearing. I wonder if Gamo is aware that they have created a second product they could sell for a premium to collectors? If not, I hope someone alerts them to this possibility.

Weight and balance
The steel ball weighs 1.6 grains, leaving the remainder of the 9.4 to 9.6 grain weight in lead. I was surprised by the weight uniformity of these pellets. Most weighed 9.5 grains, which is on the heavy side for a .177 pellet. Balance is best determined by shooting groups. By balance, I mean the uniformity of the weight distribution along the pellet’s axis. Close examination of the lead body shows seams with some flashing on opposite sides. 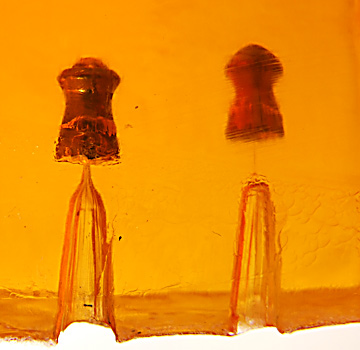 Rocket pellet on left did not penetrate as deeply as Beeman Kodiak on the right. This extreme closeup makes the base of the bar appear curved, but it is actually straight. The slightly broader penetration channel does indicate greater energy transfer, as Gamo claims, and that would explain the lack of penetration.

Penetration
The Rocket was tested against a Beeman Kodiak pellet. Both pellets were shot from a Beeman P1 pistol into a bar of transparent facial soap. The Rocket weighs 9.5 grains, while the Kodiak weighs 10.6 grains – giving the power edge to the Rocket when shot from a springer. That didn’t make any difference, however, as the Kodiak clearly went slightly deeper into the soap. While other tests, such as penetration in wood, might produce different results, this test establishes the degree of penetration in a uniform medium. I believe a test could be constructed that would favor the Rocket, however that’s not what I’m after. Shooting into wood, for instance, is not a reasonable test for pellets. Neither is soap, however the soap is at least a homogeneous medium that shows comparative results.

Shock
The wider wound channel in the soap indicates that the Rocket did transfer more energy to the bar. That would explain why it did not go as deep. So that part of Gamo’s claim is true, when tested against a Beeman Kodiak.

It might appear that I’m being overly critical of the Rocket, but that is not my intent. Gamo has made some big claims for shock and penetration, and I’m trying to report the performance data I obtained along with the test I used. I tested penetration for you today – and I’ll test grouping and velocity tomorrow.