Before I get started on today’s blog, I want to announce that Pyramyd Air is now making their email campaigns available online.
This is great news, because many of us have avoided subscribing due to already-full inboxes.
Each week, a new email is sent out with new products, sales and promotions, special offers, etc.
They usually come out on Wednesdays, but not always.

dm20 gets the credit for this one.
He made this comment. “I thought you said makers of quality rings only labelled them in either 3/8 or 11mm,
and not both?”

I probably did say that, though I don’t remember the context of the statement, so it’s hard for me to remember exactly what I was referring to. But that’s not the issue. The issue is: What is an 11mm dovetail? read more

We had a LOT of questions about UTG Tactedge 4×40 scope and we got an important question about the Rex 10-40x scope that is directly related to the UTG questions, so today I thought I’d spend more time on my explanations.

Lack of AO
One person asked why I didn’t mention that the 4×40 scope lacked an AO feature, and someone else asked whether or not it has AO. I actually DID address this point when I mentioned that the parallax is fixed at 35 yards. That means it isn’t adjustable – no AO! I felt that was good enough, but the questions say otherwise. So, why didn’t I mention the lack of an AO specifically? read more 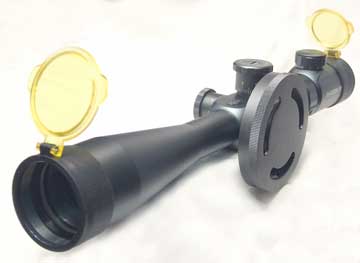 The largest scope in Pyramyd’s lineup is this beautiful new Rex 10-40×50. Shown here with the sidewheel attachment mounted.

Springtime is when the shooting sports industry puts out the bulk of its new products, and this year Pyramyd Air has an embarrassment of them! They told me there are so many new products that they can’t fit them all into their new product emails, so I am taking up some of the slack by showing you some of what’s new.

Rex scopes
Pyramyd Air has added the Rex line of scopes to its scope line. These optics come from the same people who bring you the BAM air rifles; and from first examination, they appear to be just as well made. Today, I’ll take a look at the 10-40×50. read more

Well, here’s a twist! A scope with fixed power. Back in the 1960s that was the norm, but today, it’s a novelty. Yet when you look at what Civil War snipers used, it was a 4x telescope – and they have recorded shots of one mile!

Rugged scope
UTG is a brand name of Leapers, so the UTG Tactedge 4×40 scope has the same rugged construction they put into their other scopes. Their Smart Spherical Structure means that it has an erector tube that returns to the same place every time.

A bundle of nice features
It comes with resettable adjustment knobs so you can always return to your base sight-in zero setting. It has a red/green illuminated reticle for low light situations, which couple with the low magnification and large field of view make it an excellent scope for fringe times in the morning and evening. The lenses are emerald-coated for maximum light transmission, further enhancing the low-light capability. read more

I’m doing this post at the request of Steve, who asked:

Do you think you could write up a detailed article about peep sites and how to use them? I just bought one for my 392, and they are indeed very accurate; I was quite impressed. But, I found that I couldn’t find much on the web about how to use them, which leaves me to believe that peep sites are a bit underrated in lieu of scopes. But I think they’re a great cost-effective alternative, especially at around the 25 yard range.Cheers, Steve Seattle, WA

History
I don’t know when the first aperture-type sights were used, but in 1884, Lieutenant Colonel A.R. Buffington introduced a new type of rear sight for the .45 caliber rifle (the Trapdoor Springfield). It featured a combined open and aperture (peep) rear sight in a raised leaf that was both adjustable to 2,000 yards range and could also adjust for windage. read more

Not that this is news – you just won’t hear it anywhere except, perhaps, here.

A “News Station” calling itself NewsChannel5.com (WTVF in Nashville, TN) reported the following:

They then cited ordinance 11-601, which makes it illegal to fire any airgun, air pistol air rifle or even BB gun in the city limits. (It’s also illegal to throw a snowball maliciously!)

Right there – they lied, because their headline says toy guns are illegal in Hendersonville. In fact, the ordinance says no such thing. It is a commonsense law about not discharging an airgun (it’s one word, WTVF!) within the city limits. In fact, the majority of incorporated communities in the U.S. have a similar law. News Channel 5 might as well have reported the rising of the sun! read more

Well, today I’ll wrap up the air rifles and we can move on to handguns next. The sky is the limit today, but there will actually be fewer guns to choose from, because “for the price” is still part of the selection criteria.

HW77
For classic lines and quality, Weihrauch’s HW77 is a certain winner. It’s the rifle that used to dominate field target in the late 1980s, and it probably got looked at very carefully when the TX200 was designed.

Fire 201S
For mass-produced big bores, the Fire 201S is the clear leader in my mind. It offers a large breech for easy loading, great power for the caliber and decent accuracy. Before 1990, a rifle like this would cost at least a thousand dollars and would have to be handmade. read more