I have to break in today for this subject because we have a reader who is getting very frustrated with his spring piston breakbarrel. I may have said these things many times before, but today I’m putting them all in one place so I will have a post to refer readers to in the future.

The artillery hold was first described by Tom Gaylord in his R1 book. The name comes from that fact that an artillery piece moves a lot during recoil, yet the gun is extremely accurate over a huge distance. In The Airgun Letter Gaylord said he got frustrated trying to shoot a Beeman C1 rifle accurately. The Beeman catalog said to hold the rifle firmly, yet he was spraying pellets all over the place when he did. So one day, he decided to hold the rifle as loosely as possible to see how much worse it would shoot. To his surprise, that rifle, which had been shooting half-inch groups at 10 meters, suddenly shot a group smaller than one-tenth of an inch. He tried it again and again and rediscovered a shooting technique that has been known for more than a hundred years. Only with a recoiling spring piston air rifle, the need for the loose hold is more important than ever!

How a spring-piston pellet rifle moves when fired
When a spring is fired, the first thing that happens is the piston starts moving. That imparts a recoil to the rear of the rifle, but since the piston is only a fraction of the rifle’s weight, this recoil is small. But when the piston comes to a sudden stop at the end of the compression stroke, the jolt sends the rifle in the other direction (moving forward) and is much larger. The pellet has not started moving while this is happening. It sits in the breech as pressure behind it builds. When the piston comes to a stop against a thin cushion of highly compressed air, the pellet is finally overcome by the pressure and starts moving. That reduces the air pressure so the piston can settle to the end of the compression chamber.

The shock of forward recoil puts the rifle in motion as the pellet starts down the bore. Also, the mainspring is now vibrating wildly and sending additional vibrations into the rifle’s mass. All of this is going on while the pellet is still in the barrel. It is physically impossible for a shooter to overcome these movements by holding the rifle tight, so Gaylord found that by holding it as loose as possible and allowing the rifle to move as much as it wanted to, the movements would tend to be the same every time. If you have ever seen a movie of a field artillery piece when it fires, you have seen the barrel of the gun move several FEET in recoil – yet the gun is accurate. That’s because the gun moves the same way every time. So wherever the gun carriage is pointed determines where the round will go. When you shoot a spring piston gun this way, YOU become the gun carriage. And you have to act neutral, so the gun can move the same way every time. 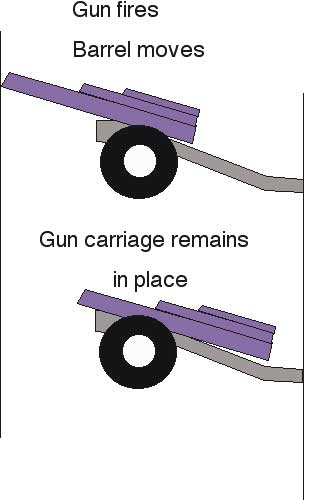 When a field artillery piece fires, the carriage remains in place.

How its done
Lay the forearm of the rifle on the flat of your open palm. Do not grasp the stock with your fingers or you create new nodes that dampen the vibrations of the rifle. Unless you can put your fingers in the SAME PLACE every time, you can never be accurate this way. Your shooting hand grasps the pistol grip of the stock as lightly as possible. Your trigger finger must squeeze STRAIGHT BACK. Rest the butt lightly against your shoulder. Do not pull it in tight. That is the setup for the artillery hold.

Part two – shooting
There is more to it than just how the rifle is held. It’s also important to “lay the gun,” which means to align the rifle, correctly. When you aim at the target, do so as relaxed as possible. Do not use your muscles to pull the rifle into position. It must lay there on target with no outside input. The best way to test for this is to align the sights then close your eyes and relax. When you open your eyes again, the sights should still be on target. If they moved off, the pellet would have gone in the same direction, had you fired. Realign the sights and go through the same procedure until the rifle does not move. When you get to that point, squeeze the trigger and fire. Do that five times in a row and you will get the best group you have ever shot with that rifle. All that remains is to align the sights so the pellet strikes where you want it to.

Where to put your off hand?
I’ve discovered that the best place for the off hand (the one that doesn’t contain the trigger finger) is just in front of the triggerguard. That gives the rifle a muzzle-heavy balance that seems to dampen any tendency to stray from the aim point. It may not always work, but most of the time it does – especially with breakbarrels.

Tom Gaylord didn’t invent this hold. He just gave it a name and described how to do it. When everything else fails, give this a try and see if you’re not amazed. 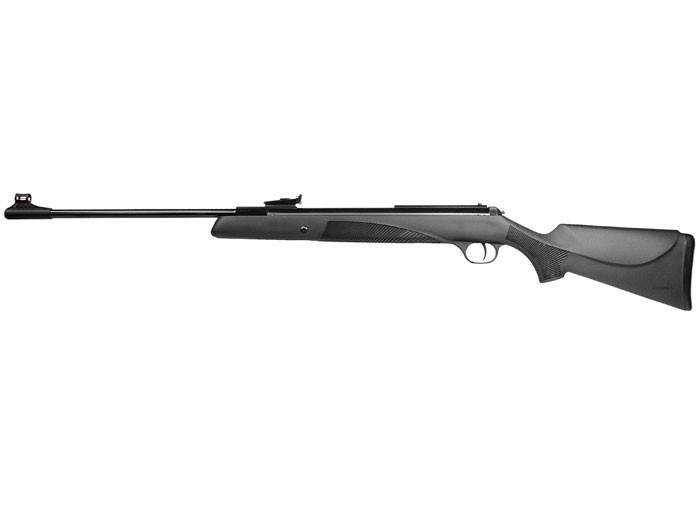