Let’s explore what to look for in a field target scope. Yesterday, I had a question from airdog, who asked, “How good a scope do you have to have to expect a level of consistency in elevation adjustment that is appropriate for FT? I’ve only used relatively cheap scopes out to 20 yds, and I know I need to do more field work at varying distances, but before I buy a $200 scope I’d like to know whether that still won’t be entirely consistent.”

Well, that’s really at the heart of what I want to say today. What does a good FT scope look like?

You learned yesterday that magnification is important if you want to determine range. However, in a less expensive scope, you can easily get so much magnification that the cheap optics can not use it all. My Tasco Custom Shop 8-40x goes dark after 30x, so I’m wasting that final 10x. In contrast, a Leapers 8-32×56 is MUCH brighter than the Tasco and can use all of its 32x power.

It’s not Tasco’s fault that their scope is dark. It’s actually a Hakko scope made around 1996, and it has the best lens coating of that time ($600-800 retail price range, that is). Leapers has invested far more time and money on lens coatings, with the result that their 2007 scope will be brighter than almost everything made in the mid-90s.

My Bushnell Trophy 6-18×40 dates to around 1997, while one made by the same brand today would be brighter. Lens coatings have advanced that rapidly. So, buy a scope that has enough power and a good enough lens coating that it will be bright enough to use for field target.

I have told you before that scopes that do not adjust down to at least 10 yards are made by companies who haven’t got a clue how their scopes will be used. It’s either 10 yards (or less) or nothing. A scope that only adjusts to 20 yards is screaming at you, “I don’t know what I’m supposed to be!” Someday everyone making scopes will figure it out, and you’ll have to look for other clues. Right now, this is a big red flag.

“Well, no!” they replied. “We didn’t design them for that. Why would anyone want to do that?” We were talking about their big new 8-32x scope that I touted so high yesterday, and the men who designed it didn’t know that the people who used it adjusted the vertical mechanism at least after every other shot! That’s funny!

I explained to them how their scope was being used and they just stared at me. Finally, one of their salesmen tried to steer me away from that topic by pointing out some other design features the scope had. I don’t know whether I got through to them or not, but their scope seems to take the adjusting, nevertheless!

That puts me in mind of the Leupold booth that same year where I asked if their scopes could withstand the recoil of a Beeman Kodiak. We played 20 questions until they ran me off by saying they don’t make scopes for airguns. Two years later, however, they knew exactly what I was talking about and were able to tell me the models not to use on the Kodiak (the Vari X II series). A year later, I was informed that anything with an Extended Focus Range (EFR) was rated for magnum airguns.

What I’m telling you is that this has been a learning process for the scope makers, as much as it has been for airgunners. Today, most of them know their stuff, and a few, like Leapers, are now building super-tough scopes (the TS platform) that are made to take the recoil/vibration punishment. PLUS have repeatable windage and elevation adjustments that can take it. Just because a company doesn’t stick its neck out like Leapers has doesn’t mean their scopes aren’t up to par. But, if their scopes focus down to only 20 yards, they haven’t gotten the message, yet, and I would avoid using scopes made by that company for field target.

You don’t HAVE to adjust
Many shooters zero their scopes for one range (usually 20 and 30 yards – I hope you all remember about the two points of intersection) and hold their reticle higher for shots that are closer or farther away. This is called the holdover method, and you don’t need as much magnification to use it. I’ve seen a shooter shoot an entire match on six power. He did okay, too, but he didn’t expect to win. The holdover method is too imprecise to win a match, but I have shot 45 out of 60 with it. If you use that method, it helps to have a card of where to aim, based on range. These cards are taped to the buttstock of the rifle. I used the holdover method when I shot a TX200 with a Bushnell Trophy 6-18×40.

Forget the fads
You don’t need an illuminated reticle, and you don’t need a mil-dot reticle; however, I’ve used both in FT matches. If that’s what you have – use it! Don’t pay extra just to buy one.

So, there are some pointers on field target scopes. The best scopes will cost over $500, but you can do pretty good with a Leapers 8-32×56 for less than half that. 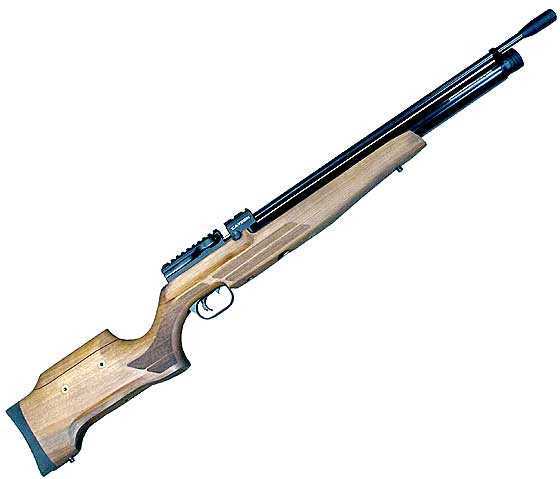