This report is long overdue. Pyramyd Air has asked both me and Tom Gaylord to write reports and articles about field target so shooters can learn the sport. This will be a big one – possibly larger than the spring gun tune report that had 13 parts! I will give you breaks in between the segments and I will give descriptive subtitles, so you know what each segment covers. Let’s get started!

History
Field target began in Great Britan sometime in the early 1980s. According to the British Field Target Association (BFTA) field target manual, the year was 1981. They say there that the original purpose was a hunting simulation, but I have been told by many veteran shooters that FT was just another sport that happened to use animal silhouettes as targets.

The course of fire is set outdoors in a natural setting. Targets are set in designated lanes of fire. A lane has a baseline, or firing point, two distinct sides that may not be parallel or straight and a far boundary. Originally the targets were set down in the lane between 10 and 50 yards from the firing point, but that was changed to meters several years ago, so the far target can be as far as 50 meters or 55 yards away. The close targets are still set just 10 yards away in U.S. matches. In Great Britan the ranges are from 7 to 50 meters. The targets are not hidden from the shooters, though they can be hard to see, depending on where they are placed on the lane and the lighting at any given time. The object of the game is not to locate the targets, but to engage and “kill” them by knocking them over. 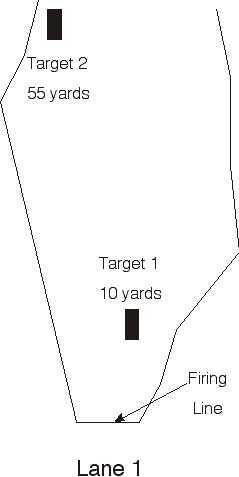 This drawing of a typical field target lane shows how asymetrical they can be. The firing line or point will be marked by two wooden stakes. Your barrel must be between those stakes when you shoot.

Targets
The original targets were simply steel silhouettes of animals. In the first iteration, the targets didn’t fall down; they had stickers on them and a hit on the sticker recorded the point. But that proved too cumbersome and slowed the match down. The next targets were hinged at the base and fell over backwards when hit. Hit them anywhere with sufficient energy and they would fall over. A strong nylon string ran from the firing point to the target to pull them up when they were hit. They were much easier to see and to operate from the firing point, but soon proved too easy to hit and a new type of target was designed.

The new type of target that is still in use today has a hole cut in it though which the pellet must pass. Behind the hole is a paddle, which is a mechanism that holds the target in the upright position. Hit it and it will fall backwards, and topple the target, as well. A reset string runs from the target back to the firing point. It sounds very straightforward when you read about it, but in practice, how the targets operate is a huge determining factor in the sport. I will come back to them several times as we learn about FT.

Kill zones can range in size from a quarter-inch to over two inches. However, while you do see quarter-inch kill zones in matches, it is uncommon to see one larger than an inch and a half. The quarter-inch kill zones are usually placed from 10 to 20 yards, which sounds like a good thing until you understand how a pellet behaves in flight. Because the scope is mounted above the axis of the barrel, it is sighted so the pellet appears to rise up until it reaches about 20 yards. Then, though it is still following an arched trajectory, it appears to fly “flat” until anywhere from 30 to 35 yards – depending on the muzzle velocity. After that, it begins to drop again. To score on a target with a quarter-inch kill zone, your pellet, which is already 0.177″ wide, much pass through a hole 0.250″ wide without touching the sides. You can only be off by as much as 0.073″! Actually, there is a little more leeway than that, because a small split where the edge of the kill zone is only grazed is still going to score – probably.

Because of the very arched trajectory of a pellet, knowing the exact range to the target is vital to hitting the smaller kill zones. So it’s easy to understand why airgunners are so obsessed with rangefinding. Unfortunately the rules prohibit the use of rangefinders, so they must use something else, which is a subject for another report. 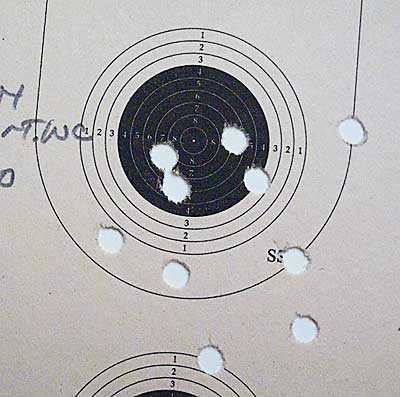