Today, I tested a brand-new IZH 61 to try to redeem the poor results from the past three posts. And, indeed, I did! The new rifle shoots more like what I remember from years ago. Let’s get shooting.

Rather than fool around with different open sights, I used a reader’s suggestion and mounted a Leapers Bug Buster II on the gun. The 2-piece rings I used are the thinner kind similar to these, with 2 cap screws instead of 4, so I was able to get the whole thing on the relatively short dovetail at the rear of the receiver. The negligible recoil of the 61 makes a scope stop unnecessary.

Pellets
I tried a wide range of pellets: Crosman Premier 7.9-grain, Crosman Premier Super Match, H&N Finale Match, RWS Hobby, Gamo Match, RWS Supermag and a Chinese match pellet I use in 10-meter competition. At first, I got the same open groups I was getting from the other rifle, but then I had a breakthrough with Supermags. 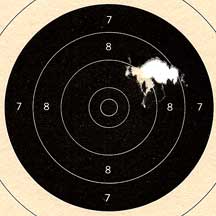 This is a much better group than I got with the other rifle. It measures 0.432″ c-t-c and was shot at 10 meters with RWS Supermags. This group proves the 61 wants to shoot.

What happened?
I was shooting a spring gun, after all, and I had to use some technique. A LOT of technique, as it turned out! The pistol-grip stock of the 61 doesn’t lend itself to the artillery hold, but the gun needs it more than many others – even some breakbarrels. Let me show you just what happened. 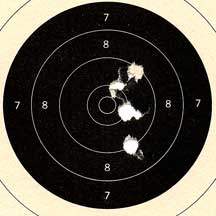 Here’s a disappointment! Five H&N Finale Match pellets were tight side-to-side but strung out up and down. 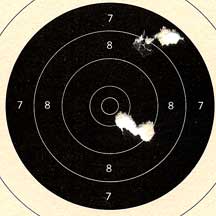 This is the group that alerted me to what was happening. H&N match pellets. Do you have any idea what’s happening?

This was the telling group. Two tight groups in two different locations. Either something like the barrel or sight is loose on the gun, or the hold is EXTREMELY sensitive, and I’m making subtle changes. When I checked the gun and scope, nothing was loose, so I suspected the hold was the problem. The solution, of course, is to make sure nothing changes from shot to shot. 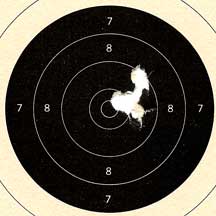 When I applied perfect technique, this is what happened. Also H&N match pellets.

And that’s what you get, when the technique is perfect. The dual groups with nothing loose told me the rifle was shooting to two different points, and the only way it could do that was by a change in the recoil pattern.

Final opinion
The IZH 61 is still an accurate air rifle that’s worth a lot more than the retail price. It’s a wonderful plinker and a good beginning target rifle to see if punching paper is what you want to do. It requires a lot of technique to shoot well from a bench, but offhand is more forgiving.

I do believe the rifle suffered when the steel receiver and metal clips were changed to plastic, but the basic goodness carries on. If you like plinking and general shooting, this is a rifle to try.