Today, I’ll move from the 20th century to the 21st as we look at the .22 caliber Daystate Huntsman MkII PH6. The classic Huntsman was long gone by the time this rifle appeared, and before long the PH6 (6-shot repeater ) concept would also be transferred to the Harrier. While some companies put retrofit repeating mechanisms on their single-shots, this one is built for that purpose, as you can see from the closeup. The 6-shot cylinder does not detach from the rifle. You load it while it’s in the receiver.

Daystate PH6 is a top-grade repeater with a walnut thumbhole stock.

The loading gate on the right side is spring-loaded, just like it would be on a lever-action centerfire rifle. A groove in the gate aligns the pellet with the breech, pretty much like the groove in the rotary breech of a Gamo CF-X. You can hand-index the cylinder to load it, but don’t overshoot the mark because it doesn’t rotate the other way. You’ll have to go all the way around to find the chamber again. 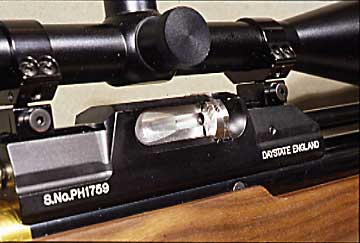 The loading gate is pushed in to show the breech. Notice how the groove in the gate channels the pellet to the right spot.

I’m not usually a fan of repeating pellet rifles, but I have to say this one worked without a flaw. Of course, the length of the pellets is constrained to the length of the cylinder, but it’s long enough for any reasonable pellet you might choose. It handled 21-grain Beeman Kodiaks just fine. In this rifle, the bolt pushes the pellet from the cylinder into the breech, so accuracy is assured to be similar to a hand-loaded single-shot.

Rifle setup
I mounted a Swift 8-32x scope on the rifle, which brought the total weight up to 10.5 lbs. A deluxe walnut thumbhole stock doubtless kept a half-pound of weight from the total, as beech is heavier. Daystate has always had crisp cut checkering on the aggressive side for a truly good hold, and this rifle was a fine example of that. I was surprised to see the classic swan’s neck cocking handle on the bolt, as my much older Harrier no longer had it.

The trigger was a typically good Daystate trigger – light and crisp with several adjustments. The rifle I tested also had a rocker safety, though many shooters ordered it without the safety so they had an access hole into the mechanism (where the safety was anchored) to adjust hammer tension. That gives a type of power adjustment in the field.

Accuracy
Kodiaks were good, but Premiers were the best in the rifle I tested. JSBs were not available to me when I did the test, but I would think they would at least equal Premiers. Half-inch groups at 40 yards seemed to be the norm, and not at all difficult to shoot, given all that power. 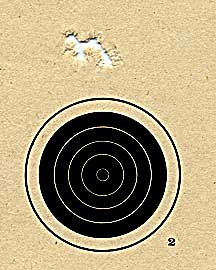 Five Premiers at 40 yards went into half-inch groups regularly. This one measures 0.543″.

When I tested this rifle in 2001, the price was just under a $1,000. Time and the devaluation of the dollar have elevated that to about $1,200 for an equivalent rifle today.

The PH6 is not the absolute last of the mechanical Daystates, but it’s the last one I will cover in this series. Next time, the Mark III with its solenoid-operated mechanism.