How does an air pressure regulator work?

This question popped up earlier this week, so I thought I would address it today.

What IS a pressure regulator?
An air pressure regulator is a mechanical device that controls the air pressure and volume available to the firing valve of a precharged airgun. Because the pressure is always the same, a gun with a regulator shoots with very consistent velocity, plus it may get a few more shots on a fill. As long as there’s enough pressure in the reservoir, it operates as described. When the reservoir pressure drops below the regulated pressure, the regulator remains open all the time and the gun becomes unregulated. It continues to fire, although most shooters notice a change in the discharge sound when their gun is “off the reg.” 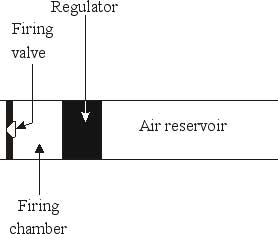 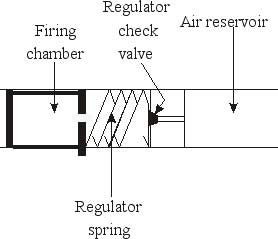 The inside of a regulator, simplified. When the air pressure inside the firing chamber grows high enough to assist the spring to close the regulator check valve, air stops flowing from the reservoir.

What prevents shooters from filling their guns to an even higher pressure to get more shots? Nothing, except the regulator itself. The spring has to be small to fit inside the reg, yet it also has to be powerful. Most regs use a special type of spring called a Belleville washer, or more correctly, a Belleville spring washer. These are cone-shaped washers stacked in different ways to achieve desired spring rates through a range of values. Once set, the spring operates within a narrow band. Belleville washer springs are strong, relative to their diameter, which makes them perfect for the inside of a regulator. However, they do have limits. They’ll do their job within the limits of their design, but they won’t hold back pressure that’s much higher than they were designed for. If you overfill the reservoir, the firing chamber will be filled with higher-pressure air and there goes the sensitive balance of the gun’s tune.

Regulators fail
It isn’t a question of “if” a regulator will fail, it’s a question of “when.” All regs fail, and when they do they have to be serviced. I have owned regulated airguns that worked fine for about five years, but then the O-rings went bad and the regs had to be rebuilt. Leaking seals are a real problem with a reg, as are failed Belleville washers, though in my experience they’re not as much a problem as seals. The point is that all guns with regulators eventually require maintenance, though they may give many good years of service.

Because reglators are complex and less reliable, the USFT rifle doesn’t have one. Instead, it operates on lower-pressure air for which a firing valve can be tuned to give an incredible number of uniform shots. That’s an interesting direction that no other airgun manufacturer has yet taken. Walther, on the other hand, has gone the opposite route of greater dependence on regulators to moderate their 300-bar (4,350 psi) operating pressure level. Both approaches work and both have good reasons for their use. It isn’t a question of whether it is better to have a regulated gun or not; it’s really up to the shooter to understand the technology he’s shooting, so he can get the maximum benefit from it.