Today, I’ll finish the report on the RWS Diana Schutze, which is marked on the gun as the model 240. We’ll look at accuracy in this report.

I had a head-start on this final report because I already shot a few groups at 21 yards while testing another air rifle. I just wanted to get a sense of how much work I’d have to do to get the Schutze on target. As it turned out, there was nothing to do.

In part 2, we saw that the velocity is right on the specification. With a rifle that shoots below 600 f.p.s., that means light- to medium-weight pellets will probably be best. I chose RWS Superdomes, RWS Hobbys and JSB Exact domes for this test.

Shooting style
I used a modified artillery hold with the firearm laying across the backs of my fingers while my hand was resting on a sandbag. The trigger is still heavy with some creep in the second stage. The creep is entirely predictable, so I pull through it and then the rifle is set to fire. The firing behavior is somewhat abrupt and harsh, though no vibration lingers after the shot.

The first target was shot with RWS Superpoints. They all landed in the black, which was a pleasant surprise. They also showed signs of wanting to group, which was encouraging. Next came the RWS Hobbys. They shot to almost the center of the bull and were even tighter than the Superpoints. The JSB Exacts were last and four out of five were in the black but not as tight as the first two pellets had been. It was time to get serious. 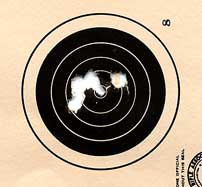 RWS Hobbys went to the right place with no sight adjustments. That’s always a good way to start things.

I’ve mentioned this before but it bears repeating. I seldom shoot as well at the start of a session as I will after some warmup groups. Knowing this, I always try to concentrate when I think I’ve found the right pellet and hold for a particular gun. It was time to go back to RWS Hobby pellets and get serious.

The rifle holds very neutral without the sensitivity normally associated with a breakbarrel. Perhaps the low power has something to do with it, but I think the Schutze is a natural shooter. The next group of Hobbys was encouraging but not as good as the first group. Then, I realized I had to concentrate on the front sight blade. As much as I shoot, you’d think that would come naturally to me, but it doesn’t.

For the next group, I did concentrate on the front sight blade and let the rear notch and bullseye go fuzzy. That’s all it took. The group was exactly what I was looking for. 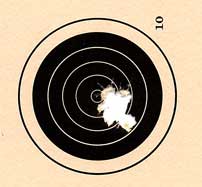 This is what I was looking for. The Schutze can really shoot. This was done by a 60-year-old man who wasn’t wearing his bifocals while using the gun’s open sights!

Have you spotted what’s different about this test, yet? I’m using open sights. The concentration I mentioned is on the front sight blade. I didn’t install a scope, and the target shows none was needed.

Summary
The Schutze is pretty much what it should be: a light, accurate youth air rifle. It has neutral handling characteristics, so special techniques aren’t as critical to accuracy, though they do have to be employed. The trigger could be lighter by half and the cocking effort could also be a few pounds lighter and the gun would be even nicer, but those things don’t detract much from a very nice air rifle. I’m glad because I now have one more model I can recommend to parents and to those looking for a smaller, lighter spring rifle for themselves.

If this were my personal gun, I’d tune it to remove the harsh firing cycle and do something about the trigger. I wouldn’t mount a scope, because it isn’t needed.