Let’s resume our evaluation of the Smith & Wesson M&P BB pistol today. First, this update on the magazine.

The follower hook
As I started my shooting session, the M&P failed to shoot. I removed the magazine twice with the same result – one BB fell out of the mag well and nothing changed. On the third try, I discovered that the follower wasn’t releasing to push the BBs into firing position. It was staying back in the loading position, leaving the BB stack under no tension. A hook on the bottom of the follower is a bit too aggressive and hangs onto the bottom of the magazine until I manually push it off. Then it releases and the follower works as intended. If you don’t know this, the pistol can be frustrating at first, so watch for this on your M&P. 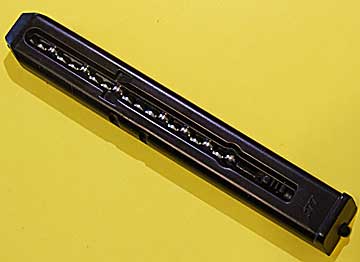 The stick mag is very easy to load, but I learned something about that follower while shooting the gun. You have to know how to release it! 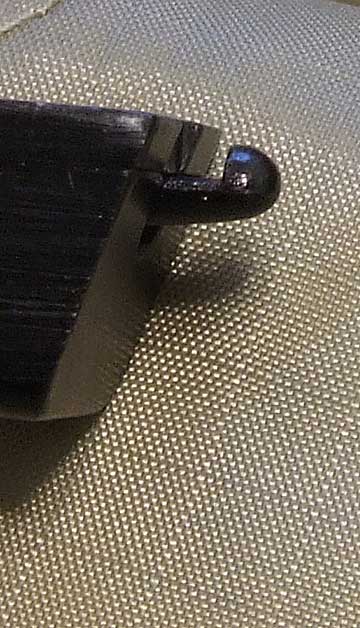 This is the hook that holds down the follower while you load. It’s very aggressive, and on my pistol I often had to push the hook back into alignment or the follower would continue to stay down.

Shooting the pistol
With that solved, the pistol functioned flawlessly. This time, I decided that I wouldn’t shoot at paper targets, because this kind of BB pistol isn’t intended for them. I simply threw three pop cans on the back lawn and proceeded to bounce them around. Today’s pop cans are made from such thin aluminum that the BBs easily pass through both sides unless they impact in a reinforced spot.

It’s been decades since I simply bounced a can around with a handgun, and I forgot how much fun it can be. I limited the distance to about 20 feet, which is appropriate for the type of gun I’m testing, and about 90 percent of my shots found their target. Those lightweight aluminum cans really do move when hit by a BB. I wore safety glasses while shooting, and you should, as well, in case a steel BB impacts anything hard in your yard. One of mine hit a rock or something, and I got it back in the face to remind me of the ever-present danger. 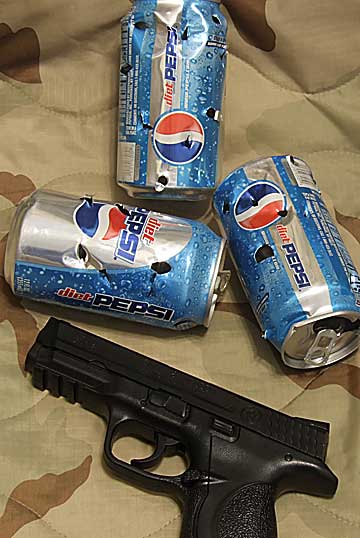 The M&P tore up these cans pretty good. Who needs paper targets all the time?

The tactical sights worked well for this kind of shooting. I held the front sight just under where I wanted the BB to go, and it went there nearly every time – including several shots on the end of the can, where there wasn’t as much to aim at. The trigger-pull on this double-action-only pistol is smooth and light enough, at 5.5 lbs., to not destroy your aim.

Velocity
With a fresh CO2 cartridge, I got velocities in the 410-429 f.p.s. range, shooting Daisy premium-grade zinc-plated BBs. But, if I fired several shots in quick succession, the velocities dipped to the 380s. That’s due to the cooling effect of expanding CO2, and it holds true for all CO2 guns regardless of who makes them. I see that the max velocity is rated at 480 f.p.s., so the pistol I’m testing is from the slower end of the scale.

What do I think?
Several things recommend the S&W M&P BB pistol. First, it has a delightfully light trigger that’s so appreciated in a DAO gun. Second, it’s accurate enough for its primary can-popping mission. The sights are bold and easy to acquire, not to mention being right on the money. And, let’s not forget – the price is great. I can’t fault this one.