Guest blogger
Greg Anderson fell in love with the FWB 124 years ago. After all these years, it’s still his favorite, and in today’s blog, he tells you why.

Everyone has a story about a gun he owns. After reading B.B.’s report on the FWB 124 – a classic pellet rifle some time back, I thought I would add my experience with the 124.

In the beginning….
I first read of the FWB 124 in a boilerplate magazine article about the best firearm of each general class of firearms. It was the usual article. The best shotgun was the Remington 870, best pistol was the M1911 and best revolver was some S&W kit gun. It was the kind of article we’ve all seen a hundred times. But what was different in this article was that it included an airgun.

The airgun they puffed about was something called a Feinwerkbau Model 124. Well, I’d never heard of Feinwerkbau or their rifle, but when I read that it didn’t require CO2 or pumping and that it needed just a single cocking stroke to propel a .177 pellet at 800 fps, I was intrigued. Eight hundred feet per second was getting close to rimfire velocity, making this more than a teenager’s toy.

My first adult airgun
I ordered a copy of the Beeman Precision Airgun Guide, and it had detailed information on the FWB 124. The catalog was also a wealth of information on what Beeman called “adult” airguns. Anyway, I was sold. I wasn’t so much sold on airguns as I was on this particular airgun. It appeared to be powerful, accurate and a masterpiece of practical engineering. 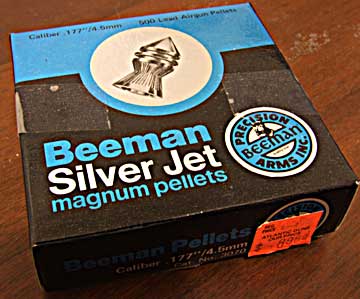 My FWB 124 loves these pellets. Wish they were still made today.

I bought a new FWB 124D from Beeman around 1978 or 1979. Along with the rifle, I bought 10 boxes of Beeman Silver Jet pellets, which they recommended for the 124. At the time, Beeman was also pushing their overpriced scope, insisting that other scopes would be beaten to death by the recoil, but I passed on it. As I recall, the scope with mounts was around $100. That was a lot of money back then.

I called several scope manufacturers to see what was available for airguns. The folks at Weaver told me their Marksman K4 scope (4×32, steel body) would handle the recoil, and they’d adjust it for 50-yard parallax. In addition, they recommended mounts for the gun that would stay put under the sharp recoil of the piston slamming home. The mounts looked like the ordinary 3/8″ dovetail units found on most .22 rimfires, except for a row of hardened steel teeth on the clamps. I installed this scope on the rifle with these mounts, zeroed it and started shooting. At that point I had about $400 in the gun, scope and ammo. (A year or two after I bought the 124, I ordered the new aluminum trigger to replace the plastic unit. It’s still in the original bag. The plastic trigger just keeps getting the job done.) 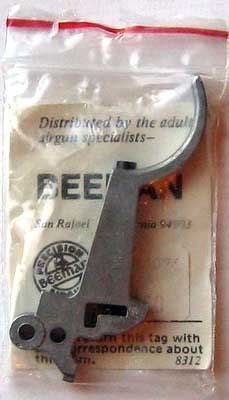 Who says plastic triggers don’t last? Here’s the replacement aluminum trigger I bought for the 124, because I figured I’d need it down the road. I never installed it, and almost 30 years later the plastic unit still works like a champ!

Figuring things out for myself
I’d never used a spring airgun before and there was little adult airgun information available at the time. Generally, what little information there was came from Beeman. I found that shooting technique was critical. You could not zero the gun off a sandbag and then expect accuracy when shooting off-hand. You couldn’t zero shooting off-hand with a sling and then expect accuracy from an off-hand snap-shot. I didn’t find that the loose hold advocated now was superior to any other hold. The one critical item for accuracy was that, regardless of how you held the rifle, you had to hold it exactly the same way for every shot. Once I got that figured out, the 124 became old reliable.

Over the years, I’ve used that little rifle to shoot just about anything you’d normally shoot with a .22 rimfire. While it’s certainly no .22 rimfire in the power department, it’s adequate for everything squirrel size and smaller out to about 20 yards. In fact, its lower power is an asset when shooting red squirrels or starlings off the side of my house because the pellet rarely penetrates the creature with enough velocity to damage my siding.

30 years old, but it’s just like new!
I’ve used this rifle for nearly 30 years now. In spite of all the dire warnings of it being hard on scopes, I’ve never even had to adjust the zero. I’ve always used the Beeman Silver Jet pellets (8.39 grains, out of production for some years), so there was never a need to re-zero for another pellet. I have about 700 pellets left of the original 5,000, so that’s at least 4,000 shots through the rifle. I recently removed the Weaver scope because my eyes are getting bad and I needed a scope with more focus adjustment in the eyepiece. When I pulled the mounts off the receiver the “teeth” on each mount had impressed a neat row of notches in the dovetail cut on the receiver. There was no evidence the mount had ever shifted in 30 years.

This Weaver scope really came through. My FWB 124 never shook it loose or shifted aimpoints.

As long as I was going to invest in a new Leapers 4×32 scope, I thought I should replace the piston seal and mainspring. I decided I would chronograph the thing before I tore it apart so I could have a benchmark for the seal and spring change. The chronograph showed the gun still drove Silver Jets at 780 fps and it made 830 fps with Beeman Lasers, so I just changed the breech seal and put on the new scope.

It’s still my favorite air rifle
I have around a dozen modern airguns. I have three other rifles, all of them more powerful and newer than the 124, including a Beeman R1, an RWS 350 and an RWS 54. Yet, the 124 is still my favorite. It’s the gun I always reach for if I just need to shoot something quick. It’s light, effortless to cock, quick to mount, powerful enough, quiet and more accurate than I am. Yeah, maybe its trigger isn’t perfect, but it’s such an elegant little rifle in every other way that I can overlook the trigger. If I have one regret about the 124, it’s that I didn’t order it with a Beeman custom walnut stock. If I remember correctly it added around $165 to the 124D’s price, which, at the time, was a lot of money. Still, in retrospect, I wish I’d scraped up the cash to get it.

The 124 in the Beeman catalog…it started a 30-year relationship that’s still going strong.

To answer the old gun magazine question, “If you could own just one airgun, what would it be?” Well, even after 30 years, if I could only own one airgun, it would still be the Feinwerkbau 124. In my opinion, it’s still the standard against which all other air rifles are measured.