I was sort of pushed into becoming a match director. We (the four founders of DIFTA) didn’t know anything about running a match, and I was the only one who had ever competed in one. But the matches I competed in were what we would now call Hunter Class, where everyone stands. I wanted people to compete in the more traditional AAFTA (American Airgun Field Target Association) way, which means shooting from the seated position, sitting on a bum bag. A bum bag is a padded bag not thicker than 6 inches that cushions the shooter from the ground, but it does a LOT more than just that. It can also help level the ground. If you’re sitting on a downward slant (your back is headed downhill) as about a third of the firing positions at the DIFTA course are for right-handed shooters, the bum bag can level the ground for you. 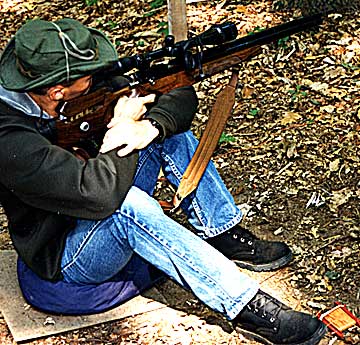 This TX200 shooter sits on a blue bum bag atop a carpet square. The whole thing cannot be more than 6″ high when he sits on it.

Preparing for a match
I read the AAFTA rulebook and was surprised that the rules were so simple. The sport hadn’t had enough time to become complex, yet. So, I guessed that the problems were not in the rules but in the conduct of the match. That turned out to be right. Let me share some of the most important aspects of a match with you. I’ll do it in the form of the safety briefing I gave at the start of every match. 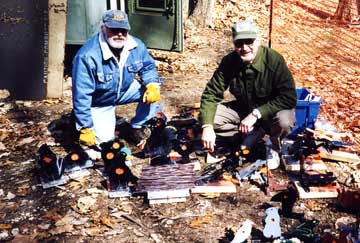 Ed Burrows and Phil Dean get the DIFTA targets ready for a match.

Match director’s briefing
Good morning! Welcome to our August 1st match. Safety is the most important part of this match, and as of now you’re all appointed safety officers. If you see an unsafe act, I expect you to call a cease fire loud enough for everyone nearby to hear. Our firing line is about 200 feet long, so the entire line doesn’t usually have to stop shooting (what we call “go cold”) for every cease fire, but if you think they should, make sure others down the line relay your call until the entire line is cold.

Calling a cold lane
If a target reset string breaks on your lane, or if a target malfunctions in any way and you need to go downrange (walk into the lane to the target) to fix it, call as many lanes on either side of you cold as necessary before you do this. If someone on a lane next to you does the same thing, you make sure your lane remains cold until they give you the okay. If a shooter has loaded his gun after a crease fire has been called, wait for him to blow off the shot before anyone goes downrange. Do not go downrange with any gun loaded!

Squads
We’ve squadded you in groups of three, and we put a lane number at the top of your score cards. You start shooting on that lane. Each squad gets a scorecard for each shooter and a clipboard and pencil for the three scorecards. Please start recording your scores on the lane on which your squad starts, then score each lane as you advance. There are 15 lanes with two targets on each lane. Each shooter will shoot two shots at each target, for a total of 60 shots in the match. When you finish lane 15, return to lane one as your next lane unless you have completed it.

Squad duties
In your squad, we recommend you do the following on each lane. One person shoots, another scores and the third watches the target through binoculars to check for proper functioning. Then rotate those duties until everyone has shot that lane. When the next lane is clear, move to it and start again.

Most shooters shoot the nearest target first, then the far one, but you may do it either way. Just tell your squad members what you’re doing so they can watch the right target.

Blowing off a shot
If you need to blow off a shot, always announce it to your squad members. If, for example you load a pellet backwards, or if you just filled your reservoir and need to blow off the first shot, point the muzzle safely into the ground in front of the firing point and fire.

Calling an alibi
Any time you feel a target should have gone down when it didn’t, have the scorer mark that shot as an alibi on your scorecard and report it to the match director at the end of the match. The match director will make the call based on the performance of that target for the other shooters. If you need an immediate judgement, for example if the target falls only half-way, stop shooting and call the match director for a ruling.

Lunch and target maintenance
We will break for lunch at the halfway point. The break will be about 45 minutes. At that time, the course will go cold and the sight-in range will go hot. You can eat your lunch, use the restrooms in the clubhouse or work on the sight-in range. I’ll be repainting all the targets to restore some of the contrast. If any of you want to help me, it takes about 10 minutes for two people to touch up all 30 targets. [I will cover why this is done and how we did it in a future post.]

Any other problems you have on the course, such as a gun or scope failing in the match and needing to be substituted, talk to the match director before making the switch.

Time
AAFTA rules allow 2-1/2 minutes per target, which is plenty of time. Nobody watches the clock, but squads are expected to keep their members on track. [This is a REAL problem with some shooters. They will sit there forever and range and re-range to the target, using as much time as they want. You may have to put spurs to these guys when that happens. Don’t worry about their scores. They’re never the top shooters.]

Are there any questions?

Scorecards
I will provide you with a sample scorecard in a future post. How it’s made can affect the ease and speed with which all the scores are tabulated at the end of a match. Believe me – almost everyone will want to know where they stand at the end of the match. We always awarded the trophies or certificates right after the match ended.

Website
A website is essential for a field target club. Try not to make it a page on someone else’s website; if you do, you’re always at their mercy. So many hobby sites are down more than they’re up that I make this caution. Post the annual schedule, starting times, directions to the match and useful contact information on the website. Post and leave the scores of the year’s matches so everyone can read them.

Use the website to attract new shooters. Tell them which kind of gun to bring so they don’t show up with a 50-foot-pound Korean .22. Describe the match so they know what to expect. Tell them about facilities so they can tell their family members in case they want to attend. We had picnic tables and some room for a gallery to watch the match, but they had to walk in our tick-infested woods. For gosh sakes, tell them to bring bug spray!

88 thoughts on “Starting your own field target club: Running a match”