When I was stationed in Germany from 1974 through 1977, I was primarily interested in clocks – both wall and tall case (grandfather/grandmother). My apartment was full of them! I had a favorite antique store in Fürth, a suberb of Nürnberg, where I bought most of them. One day, I spotted a strange air pistol in the store. It looked for all the world like someone had shortened a breakbarrel spring rifle and fashioned a wood pistol-grip stock for it. At the time, I was unaware that Erlangen, the city I was living in, was also the home of the Bayerische Sportwaffenfabrik (Bavarian Sporting Arms Manufacturer) or BSF. That pistol was a BSF S20.

The BSF S20 Match is a big air pistol that looks like a cut-down youth rifle. Sorry for this rotation, but Blogger only permits 5-inch-wide photos, and I wanted to show more detail than that allows.

In the middle of my tour, I purchased a Diana model 10 target pistol and became reacquainted with pellet guns. Robert Beeman’s Air Gun Digest was published in 1976, and I bought a copy in the Stars & Stripes bookstore at my Kaserne. Reading that book kindled a desire to obtain an FWB 124 breakbarrel spring rifle, which I did just as soon as I returned to San Jose, California.

Duh!
It’s as if I had been living in Golconda for four years and suddenly became interested in diamonds after learning about Tiffany’s. What I could have done if only I had known then what I know today!

Ugly duckling
The BSF S20 is an acquired taste. It looks grotesque at first glance. Well, actually, it still looks grotesque to me, even today. It still resembles a youth model breakbarrel that was chopped and channeled into a “pistol” that only the inventor or his mother could love. To my eye, it looks oversized and unbalanced, but that goes away when I hold the gun in my hands. It feels lighter than it appears, and the balance is nearly perfect. That huge stock actually fits my average-sized hand quite well.

Bank-vault smooth
Another drawback to a breakbarrel air pistol is the large effort needed to cock the gun. Owners of Diana models 5, 6 and 10 pistols will know what I’m talking about. My Diana model 10 required 35 lbs. of effort to cock, which was very hard until I got used to it. This larger, rougher-looking BSF pistol must be even harder. Right? Not even close! The cocking is light and butter-smooth. A Mercedes among spring-piston pistols.

Watch that trigger
A real key to smoothness in a BSF spring gun is use. These guns wear in, not out, as the advertising from both Air Rifle Headquarters (the original one, not Jim Maccari’s website) and the Beeman company both touted. I mentioned that in the report I made about the BSF 55N several months ago. In that report, I mentioned that the trigger was set so light that it slipped when I shut the barrel the first time, putting a hole in the ceiling of my office. I adjusted it much harder, but it’s still only 38 oz. Advanced collector Don Raitzer tells me he thinks all BSF triggers are “twitchy,” as he puts it. I think they have to be watched closely, because they have a tendency to become more sensitive over time.

The trigger on my well-used pistol was breaking at about 8 oz. when I got it, so I immediately cranked it up to 18 oz., which is the MOST I can get out of it! That’s somewhat scary, following the hole in the ceiling, so I’m extremely careful where the muzzle points when the barrel is closed. The trigger adjustment screw is in the bottom of the grip, behind where the pistol is held. I accidently removed the adjusting screw and saw that it affects the amount of bite the sear takes, which is a dangerous kind of adjustment. On other airguns, this screw would be the one they warn you not to touch! 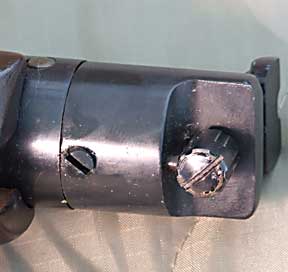 The trigger adjustment screw is beneath the spring cylinder, behind the grip. The large screw on the right is the elevation adjustment for the rear sight.

A completely unnecessary trigger shoe makes it all the easier to apply enough pressure to break the sear before you’re ready. I like the look and feel of this option, but given the light pull, plus the fact that it’s a single-stage trigger, means I have to be fully ready to fire before my finger touches it.

Strange sights!
The sights are a strange post-and-bead front and a U-notch rear. They belong on a .22 rimfire rifle, not a target air pistol. The front sight is covered by a large steel hood, giving you a place to grab when cocking the pistol. The rear sight adjusts for both windage and elevation. The elevation is a somewhat mushy click detent system, while the windage is a sliding sheet metal notch with a jam screw to lock it. Sort of an IZH 46 meets a 1950 Crosman 106 arrangement. 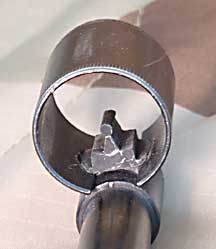 It’s a big ‘un
The weight of 43.5 oz. feels surprisingly light, probably because of the gun’s size. This is no pocket pistol! At 15-3/4″ long, it rivals the other massive air pistols, such as the BSA Scorpion and the Diana model 5. The barrel and action sit very high in the hand, leading to a lot of wobble when held on target. Hence, this target pistol is anything but! It’s fine for informal targets, but they used that title to differentiate between this one with the adjustable sights and the plain old S20 that lacks them.

With all this criticism, you probably think I hate this pistol, but I don’t. It just has quirks, like its 55N rifle sibling. Many older airguns have similar quirks that have to be learned and watched. Because safety is involved, I would pay extra attention to the orientation of the muzzle every time you make the gun ready to fire.