Today is the day many of you have been waiting for. Let me be the first to tell you – the news is very good! The Evanix Renegade rifle is a real shooter. However, it’s a repeater, as well as being capable of double-action fast firing, and there are some things you need to know.

I scoped the rifle with a Leapers 4-12×44 Mini-SWAT scope with sidewheel parallax adjustment and a 30mm scope tube. With that accomplished, I headed to the range, taking a hand pump to fill the gun.

Conditions
The range was relatively quiet, as the air clears ahead of Hurricane Ike. The winds were variable at 5-10 m.p.h. with no great gusts. The target was set out at 40 yards, because the Renegade is a long-range hunting rifle. It took 10 shots to get zeroed, with the first two at 10 feet and then a cylinder full at 20 yards. Once the target was moved to 40 yards, two more shots were required to get on target.

Beeman Kodiaks
I’d thought Beeman Kodiaks would be good in this gun, but they turned out to have a quirk. Remember me saying some of their skirts were so large the pellets would barely seat in the cylinder (pellets are loaded skirt-first in this rifle)? That meant that some Kodiaks seated deeper in the chambers than others, and that’s never good for accuracy. 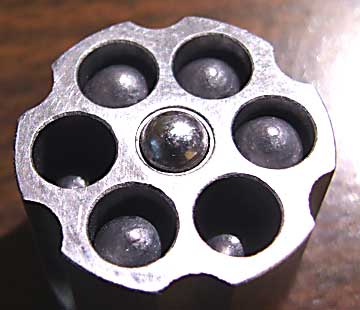 When the pellets are seated at different depths (like this), you can’t expect accuracy. This is caused by skirts that are slightly too wide for the chambers because the pellets are loaded at the front of the cylinder, skirt-first

Double-action shooting results
However, I did get one good cylinder of Kodiaks that I shot double-actyion at 40 yards. Now, I’m not Chuck Connors and this blog isn’t Hollywood, so the group you’re looking at is a real one shot double-action at 120 feet. 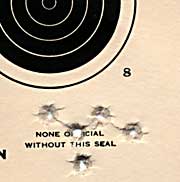 Five double-action shots at 40 yards. These Kodiaks went into a group measuring 0.901″. They’re below the bull because I didn’t bother sighting for double-action.

I didn’t do any more double-action shooting because I really wanted to see what this rifle can do. With the great single-action trigger-pull, why mess around with double-action? Yes, I would use it for a fast follow-up shot; but at 40 yards and beyond, it’ll take some learning to know where to aim, because the aimpoint changes with the velocity of the pellet. As you’ll remember from the earlier testing, Kodiaks vary by over 100 f.p.s.; past 30 yards, that’s going to make a big difference where they land.

JSBs
I tried a cylinder of JSB 15.8-grain pellets just so I could tell you about them. They went supersonic and grouped in 4″. No further testing was done. Obviously, Crosman Premiers, which are even lighter, would also have gone supersonic on this day, so I didn’t try them. The JSBs fit the chambers better than the Premiers, so they may have been faster despite their heavier weight.

Eun Jin
Ahh! The pellet the rifle was designed for. You would expect the Eun Jin super heavyweight pellet to shoot the best on high power and it did, but not before some learning took place. At first, the best I could do was just less than 1″ at 40 yards. That’s not bad; but when I can shoot just as well in double-action, I know I can do better with a crisp single-action trigger. I shot and shot; as I did, the answer revealed itself to me. The Renegade has a real “sweet spot” between 2,500 psi and 2,000 psi where everything comes together for Eun Jins on high power (single-action). Once the gun was in this pressure range, it simply could not miss! You’ll get only 12 shots in this narrow power band; but when you want to thread the needle, this is the way to do it! 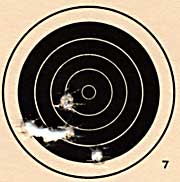 Five single-action Eun Jins at 40 yards. This is an average group. 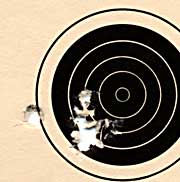 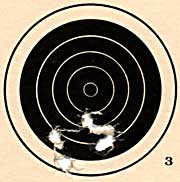 Five more single-action Eun Jins. The pellets just kept landing in the same place, once I found the secret.

The shooting was getting very routine, so I adjusted the scope and fired one last group. It turned out to be the best one of the day! 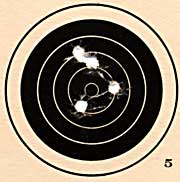 There’s SO much more testing I could do with this rifle that it staggers the imagination, but I believe we have at least explored the performance enough to know where it falls within the ranks of PCPs. I’ll test one of the other three Renegades next.