Just in case you missed this announcement before….Pyramyd Air is having a garage sale Saturday & Sunday, Sept. 20 & 21. If you can’t make it, have a look at their used products. However, the garage sale will have much more than just used products, so it’s worth attending even if you’ve got a ways to travel.

Today, we’ll look at showing printed details on a gun – one of the most difficult shots to take, but with digital cameras it has become a lot easier. Like all photography, it all comes down to light; and, with printed details, how the light strikes the subject is extremely critical.

You can easily see the printed details on guns because you’ve learned how your eyes work. Without even thinking, you turn the gun until the ambient light strikes it in such a way that the printed details stand out. On some guns, though, the print is very thin and small, and you really have to work the light to see them. Certain airguns such as Daisy BB guns are the worst of all.

Print is hard to see
Print on guns is usually stamped into metal surfaces or molded into the synthetic parts. On some guns such as the first run of BSA underlever rifles (ca. 1905-1914), the print is put on by acid etching that may have blended into the patina by now. AirForce rifles have laser-etched text that is very shallow and doesn’t have much contrast once the white ash left by the laser is wiped off.

This is the hardest!
I think the most challenging camera shot of a gun is photographing the rounded top of a Daisy receiver so the printed details are visible and legible. The light just doesn’t want to wrap around that curved surface to let you see all the print. You can use reflectors, but they have to be close to the subject to work.

This is how most people would take this picture. One strong overhead light source and ambient sunlight from the left. It leaves a lot to be desired. The bottom line of the text–“Plymouth, Mich. U.S.A.”–is almost invisible. I used a white paper reflector that wrapped completely around the bottom of the gun and reflected from both sides.

This shot is a highly processed version of the first shot. It’s only slightly better, and it shows mottled surface patina that makes the image confusing. This patina problem is very common on rust-prone guns like old Daisys.

By shooting a strong light from the right side, the letters show up clearer, and the bottom line now becomes visible. I used a tactical flashlight for this, which is a field expedient at best, but it does illustrate the concept.

Chalk in the letters is an old standby, and you can see why. It makes the letters jump out. I used sewing chalk that’s used for marking garments because it’s what we had (it also crumbles less). If you don’t have any chalk, I recommend this stuff over blackboard markers.

Light angle reveals a lot of detail
Anyone who has ever done photo intelligence knows that the camera angle is very important. It can conceal or reveal important information. Look at the two photos below to see what I mean. 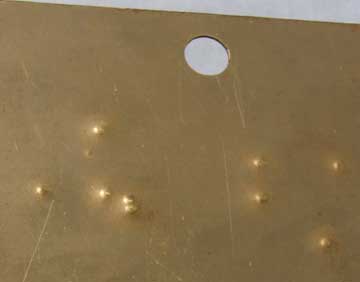 The back of the Daisy target trap from yesterday–taken in light that was almost overhead. The depth of the BB dents is difficult to estimate. 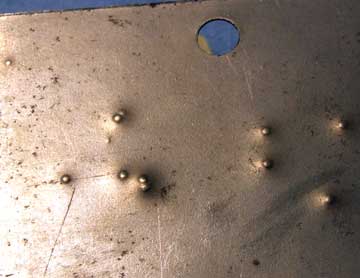 By angling the light from the left side, the dents come into sharp relief. Notice the highest dent on the left is actually two dents very close together. That was impossible to see in the first picture.