First an announcement for all who have wondered if the GRT III trigger will fit the new Benjamin Super Streak. The answer is “yes.” The trigger pivot pin has circlips on both ends and the other internal trigger parts look rougher than the corresponding parts in a Gamo trigger – especially the sear – but the GRT III fit and worked properly.

We last looked at the Pump-Assist Benjamin 392 on December 26. After that, the maker made some important changes to the pump mechanism, so I laid off reporting about the rifle again until Pyramyd Air had guns back in their inventory.

Today, I’m scoping the rifle and looking at accuracy at 21 yards. We looked at 10 yards with open sights, but with a scope the range extends considerably, because you’re able to see and hold on a much smaller aim point with precision.

Sniper scope
I selected a UTG Tactedge 4×40 scope with extra-long eye relief for this rifle. The four-power magnification doesn’t blow things up the way a more powerful scope would, but this is the brightest scope in my arsenal and I felt it complimented the 392 perfectly. The 392 isn’t a tackdriver, after all. It’s a fast little carbine and anything that enhances that adds to the enjoyment.

Air Venturi intermount
I’m using the Air Venturi intermount on this rifle, which positions the scope back over the receiver instead of far forward the way most intermounts do. I had to install this mount on the gun, which isn’t difficult, but it did demonstrate a few things you want to look for. First, the mount legs go on individually, then the top rail ties them together. Second, there’s a small amount of movement side to side until you snug down the mount. You can really put some torque on the Allen screws, because the mount legs attach to the thick receiver instead of the thinner barrel. You cannot crush anything by tightening this mount securely. Finally, you must level the mount before tightening it down, because you want the scope rings to be level with the barrel – not canted to one side.

UTG Tactedge sniper scope looks good and works great on this rifle.
The AV intermount raises any scope quite high, so be prepared to deal with it. An add-on cheekpiece would be a nice addition to the rifle if you’re going to scope it.

Sight-in
Sight-in was two shots at 15 feet and a confirmation shot at 21 yards. I was on target and shooting groups in five minutes.

Session
I decided to test the rifle with six pump strokes. After all the testing was done, I tried both eight and five pump strokes and confirmed that six was the right number for best accuracy indoors at 21 yards. Six pumps delivered a velocity of 574 f.p.s. with .22 caliber Crosman Premiers and 560 f.ps. with Gamo Hunters.

Premiers
The Premiers are a long-time favorite of mine for 392s, and they didn’t disappoint this time. Although the average groups were around 0.75″, the best was just under a half-inch. I took the extra time to center the shots because this particular Leapers scope is so easy to use. 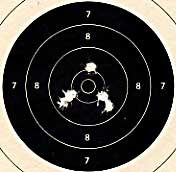 I had centered the shots before shooting this 0.489″ group of five Crosman Premiers. After this, I never adjusted the scope again.
Gamo Hunters
I had high hopes for the Hunters. They just looked like they should shoot well in the 392, and as you can see, they did. This is a pure lead pellet that will deform more readily than a Premier when it hits flesh. 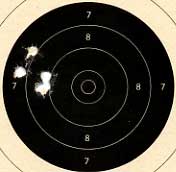 This group of Gamo Hunters looks tighter than the Premiers, but I was unable to measure a difference. It’s 0.489,” too.
Improvements to the mechanism
The pump assist mechanism remains as easy to operate as the first version, but the new one is quieter. Belleville washers have been added to tension the linkage and remove the slack. The method of attachment to the gun has changed just a little, and the anchor point of the mechanism seems stouter. The inletting of the forearm looks more finished now, as well. 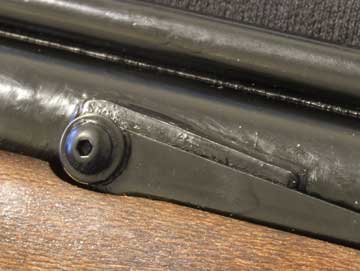 New anchor for the pump assist looks stronger than the first one.
Throughout this test, I’ve probably pumped the rifle at least a thousand times and I must comment that it’s easy, even when holding it by the pistol grip. Remember, you don’t get more power from the Pump-Assist, it’s just three times less effort to pump. Many of our readers with disabilities have asked how well it works and I can tell you, with the Pump-Assist it’s very easy to pump this rifle.