So I was just standing there looking at a table when this man walked up and introduced himself. Said he had a Benyamin pump rifle and would I like to see it? Would I? 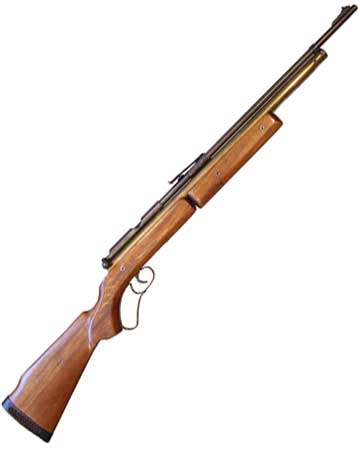 This Benyamin multi-pump is a sharp-looking air rifle – from a distance. The image breaks down with examination.

What he had is indeed a Benyamin – not a Benjamin – though in one place on the gun the name is spelled that way. The black rubber recoil pad, which is held to the stock by two nails (!), says Benyamin, and the steel receiver says Benjamin. The gun is .177 caliber, or .177 call. as it says on the receiver. 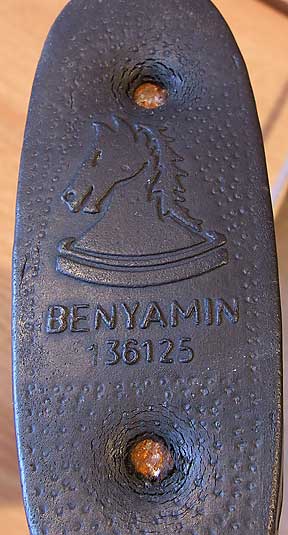 This is how it’s spelled on the recoil pad. The horse also appears on Beeman’s example. Notice the two nails that hold the recoil pad to the gun! 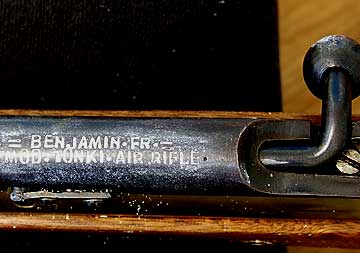 On the receiver BENJAMIN is spelled with a J. After that are the letters FR. (France – as in French Indochina?). Under that is “MOD. TONKI AIR RIFLE”

The caliber on the receiver. All letters appear hand-stamped.

Think you don’t know what a Benyamin is? If you own the Blue Book of Airguns 7th Edition, think again. You’ll find it at the bottom of page 124, just after the Benjamin listings. Robert Beeman wrote the single paragraph description that begins “Maker unknown…”

But I like the last sentence the best. It reads, “Extreme rarity precludes accurate pricing on this model.” That’s what I’m talking about! I showed that passage to the gun’s owner before we continued our talk.

Beeman speculates the gun might possibly be of Philippine or even U.S. origins, but at the show I got a different opinion. Davis Schwesinger, the former owner of Air Rifle Specialists, who lived in the Philippines, said he thinks it might be an Indonesian gun. And a friend of mine who was born and raised in the Philippines looked at it and said the same thing.

My wife researched the Benyamin name and found that it could have originated in French Indochina (Laos, Cambodia and Vietnam before 1954). They spell Benjamin with a Y.

The fact is, however, we do not know for sure where this rifle was made. Maybe a reader from that part of the world can help.

The strangest feature, from a host of strange ones, is the sheet steel triggerguard that has been fashioned into a finger lever shape. The rifle is a bolt-action single-shot, but it has this deceptive lever-looking guard that, although immobile, looks ready for action. 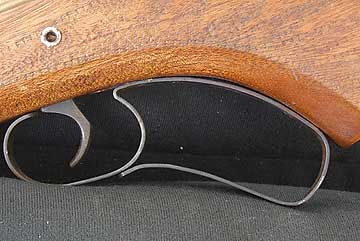 Here you can see the sheetmetal triggerguard that’s formed into a finger lever. It doesn’t move. This is a bolt-action single-shot. One of the stock rivets is seen at the upper left.

The barrel appears unrifled. It’s too dark inside to see any detail, but a pellet run down the bore emerged without the characteristic land marks of rifling. However, the pellet was squeezed down quite a bit, so the bore is tight. From the feel of the pellet’s traverse, the bore is as rough as a city sewer pipe.

The stock is strangely shaped with angles and flat spots not found anywhere else. The cheekrest is scalloped slightly, like a subtle Tyrolean. The pistol grip is stippled with a striped pattern of large dots. The pump lever wood is held on by four crude rivets. Two more rivets sit just above the triggerguard on the buttstock. 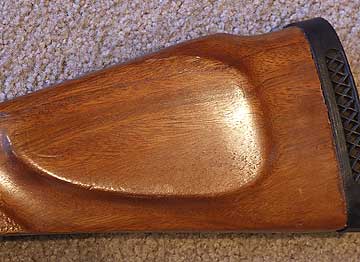 The cheekrest is slightly scalloped – a nice touch.

The steel sleeve that holds the rear sight leaf has what would be called filework on a handmade knife. The top of the rear sight leaf is also filed in a coarse crosshatch pattern. All the steel is blued, but patina and some rust have replaced about half of it. The pump tube is brass with no finish. 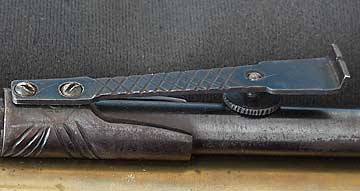 File work on the rear sight is hand done.

This rifle does not pump and will not cock. It would probably be simple to restore to operation given the overall simplicity of the design, but there’s little point. As rare as Dr. Beeman says it is, this rifle is for collecting, not shooting. Uncharacteristically, I won’t be doing a test-fire for you.

I saved the best for last. This is not the same gun Beeman shows in the Blue Book. It’s a completely different model. So, Benyamin comes in at least two separate models.

I imagine that in this rifle’s country of origin, it may not be that rare. But here in the U.S., it’s very uncommon. Are these the only two in the U.S.? I doubt it. Talking about the gun may reveal many things we didn’t know before, and more guns may yet pop up in collectors’ hands.

Yes, I bought the gun. It practically jumped into my hands at the show. Like I said, the 2008 Roanoke Airgun Expo was the best airgun show I’ve ever attended.