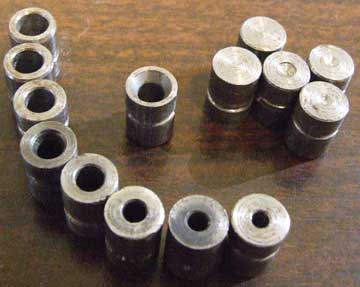 Dennis Quackenbush modified the compression chamber to accept these transfer ports. The blanks are for additional experimentation.

Switching to a .177 barrel on the same R1 and shooting  .177 Premier lites, the results were fairly close to the .22 barrel, except that the 0.110″ port lost only 40 f.p.s. and the 0.155″ port might have lost slightly more than 30 f.p.s. Because I was averaging a spread of 10 irregular shots, the numbers are not as close as I would like for a reason I’ll mention in a moment.

The conclusion I drew from the test was that for the Beeman R1, a port size of 0.125″ is ideal for both .177 and .22 calibers. That happens to be the size Weihrauch uses for that model. I would assume .20 caliber would also work well. Since only a few .25-caliber R1s were made, I’m guessing the factory left the port size at the same 0.125.” That makes their job easier and also allows for the field swap of a different-caliber barrel without a major disruption.

But wait
Now for the downside. The transfer ports Dennis made leaked a little. They were a close fit in their hole in the compression tube, but they had no special provisions for sealing their outside diameters other than the closeness of the fit. It seemed that some air blew past the port on every shot. The velocity was about 50-60 f.p.s. slower in .177 caliber and 30-40 f.p.s. slower in .22 than an unmodified R1, but that’s difficult to pin down since this testbed rifle can be fired only with a replaceable transfer port. Since no two rifles perform the same, it’s a stretch to compare the testbed rifle to an unaltered R1. I don’t know if this affected the outcome of the test.

A second test rifle
The Whiscombe that I made into a 5-part report also came with transfer port limiters that operate exactly the same as the replaceable ports Quackenbush made for the R1. They fit tighter, however, because the restrictors are Allen screws with air holes bored through their centers. The screw threads, being very close in size to the corresponding threads in the end of the compression chamber, offer greater resistance to escaping air than the straight sides of the Quackenbush ports.

Though I didn’t do a test of comparative velocities per se, I did write in Part 2 of the report that the rifle it was shooting .22 caliber Crosman Premiers at well under 12 foot-pounds when I received it. When I removed the Allen screw transfer port limiter, the same .22 caliber rifle shot Premiers at 26.88 foot-pounds. You can also read in that report that the transfer ports of various sizes affected velocity much more than the Quackenbush ports on the testbed R1.

Evaluation of a third spring rifle
I also measured the transfer port of a Webley Patriot and found it to measure approximately 0.154″. I say approximately because I didn’t disassemble the rifle to take the measurement. Clearly, this port is much larger than an R1 port, but it had a strange affect on velocity. In .25 caliber, it worked well but in .177 caliber (Quackenbush sent me a Patriot with all four caliber barrels) it couldn’t even break 1,100 f.p.s.! I found that shocking until I looked at the R1 test data. The .177 caliber did not like the larger ports there, either, so there must be a caliber relationship to port size.

Conclusions
This really isn’t enough data to form solid conclusions, but it appears that as caliber increases, the transfer port size can also increase a little without power loss. And a smaller caliber can more easily tolerate a smaller port.

The second observation is that the port works best when it’s the only place the air can pass through. Any blowby and the advantages of the perfect port size might be lost in the overall inefficiency of the rifle. That would include a weak breech seal.