Lots of interest in this story! I should have told it long ago. One of our readers may have actually seen the rifle at the recent airgun and firearm show in Frederick, Maryland.

With the last report, we left off with an external examination of the rifle. Naturally, as a red-blooded airgunner, I put it through the chronograph first thing. The cocking effort was 53 lbs., compared to a Beeman R1 that cocks with 36-41 lbs. of force. So, while the rifle isn’t the heaviest-cocking springer I’ve ever tested (that distinction belongs to a Hatsan 135 that took 75 lbs. to cock), it certainly wasn’t built for casual plinking.

The firing behavior was harsh. There was a huge lunge forward plus lots of vibration. The big lunge means a heavy piston, and the vibration usually means a canted mainspring. I said last time that the barrel was an Anschutz, but I found that Steve Vissage told me he thought he remembered putting a Webley Ospry barrel on the gun.That would have had the proper dimensions for a .22 caliber pellet.

Then, I disassembled the rifle. I was all set to use a mainspring compressor, but Steve told me the mainspring was under about a half-inch of preload. So, I removed those three machine screws and the one triggerguard screw, and the end cap popped up by less than a quarter-inch. I guess over time the spring had scragged (taken a set length from which it will never diminish until it wears out). 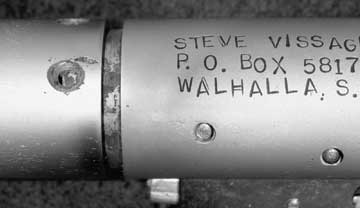 Not a lot of spring preload. Vissage saved some money by not threading the end cap like a Weihrauch.

An R1 mainspring weighs 6.3 ounces, in comparison, or just over half what this one weighs. Look at the photo for a comparison.

Guess which spring goes in the Vissage rifle? The R1 spring on the left is worn-out and canted. The Vissage spring is also canted, although this picture doesn’t show it.

The piston came out next. It weighs 18.2 oz. and is 1.30″ in diameter, while an R1 piston weighs 12.6 oz. and is 1.147″ in diameter. Vissage had the piston tempered and shot-peened to relieve stress. The piston rod was hardened and drawn to a dark straw color. That should make it file-hard. The spring guide is also proportionately larger than the R1 guide. 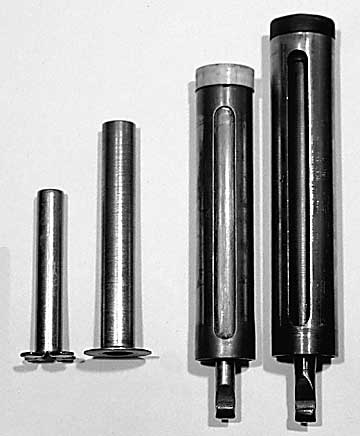 Vissage’s piston weighs over a pound and dwarfs the R1 piston beside it.

A close examination of the piston seal revealed several flat spots, which are burn marks from excessive friction. Vissage told me he put a lot of effort into the selection of material for the piston seal. He was looking for high-lubricity and tolerance for high-temperatures from the heat of compression. Those flat spots told me the seal was too dry and was wearing from the friction with the chamber. 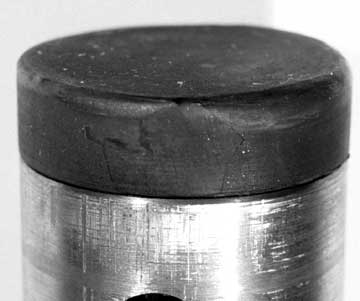 See the flat spot that’s facing you? That’s a burn due to friction.

After seeing the massiveness of these parts, I felt that some velocity was lost by a slowdown in acceleration of the piston. The weight of the piston told me where the rifle’s powerful forward lunge was coming from. However, before you start criticizing Vissage, let me tell you that Jim Maccari once made a plastic piston for a TX200 to accomplish just the opposite – faster acceleration from lighter weight. That gun vibrated like a jar full of mad hornets, so you can go too far either way.

The piston seal is not a parachute design. Perhaps there’s some loss of pressure around the sides, where the high-pressure air has nothing to confine it. A parachute seal would inflate and push its sealing edges against the cylinder walls, but this seal can’t do that.

I lubricated the piston seal with Beeman M-2-M moly grease before installing it again. The mainspring received a coat of Maccari’s black tar to cut the vibration. All friction points received a coat of M-2-M grease. The thin washers at the pivot point had never been lubricated. Steve counted on the Armaloy plating to self-lubricate, but I found it mostly scraped away when I disassembled the rifle. So, I used moly paste on the washers, and the cocking got smoother.

When the gun was back together, it felt like the cocking effort had diminished, when in fact it had actually increased by 2 lbs.! It was smoother but also a little harder to cock. The velocity with Wasps averaged 776 f.p.s., but that dropped to 767 pretty fast. I imagine the rifle will sink back to 755 in time. It vibrated much less this time, though there was still some present.

Sorry to say that I never shot the Vissage rifle for accuracy. I was more interested in how the powerplant performed; and, as we saw, it was about like a factory R1.

When I tuned a standard Beeman R1 with a Venom Mag 80 Laza kit, the average velocity with Eley Wasps jumped to 840.8 f.p.s., and the firing behavior was as smooth as glass. The Venom kit was the first to offer Delrin button bearings to float the piston in the spring tube. It took 50 lbs. of effort to cock, but the return was a much more powerful air rifle.

That’s the tale of a man and his quest for speed. The other two rifles he built were a .177 and a rifle with both .177 and .22 barrels, which he kept for himself. Vissage never went supersonic in .22 caliber, but I bet he knew a lot more about what goes into a powerful spring rifle after this project was over! And, now, we all know a little more.