Today, I’ll start disassembling Wayne’s HW 55 Tyrolean rifle to see what it looks like on the inside. Wayne bought this rifle on my recommendation and at a price that guaranteed a good investment from the start. From the firing behavior and other visual clues, the rifle seems to have been recently tuned. We will discover whether that assessment is true once we get inside. Also, there were a couple of concerns with the rifle. The Rekord trigger, which in the 55 is a special target version capable of extraordinary lightnesss with positive safety, has been adjusted rather heavy. It’s not even as light as a sporting Rekord, which is nowhere near as fine as a target Rekord can be. So, I’ll look into adjusting it and anything else it may need. Additionally, the cocking link drags over the mainspring when the barrel is closed after cocking. I’ve felt this before in other spring guns, but I’m going to have a close look to see if anything can be done.

A little R1
This rifle is constructed like many classic Weihrauchs, so there’s a lot of similarity between it and the Beeman R1. Of course, the HW 55 is nearly three decades older than the R1, so perhaps it’s more correct to say the reverse–that the R1 is a big HW 55. The point I’m making is that the 13-part blog I did on tuning a spring gun, which was based on an R1, holds true for this rifle, as well. There are some subtle differences besides the scale of the two rifles, and I’ll cover those as we come to them. You might want to review that tuning report, as I may have touched on a few things that I’ll not put into this report.

No safety
Step one is to remove the rifle’s action from the stock. Before doing that, let’s look at the first significant difference between an HW 55 and most other Weihrauch spring rifles. The 55 has no safety! The automatic safety was added to the line, model by model. At one time, none of them had it. I guess it seemed right for the sporting models, because that’s where it ended up; but, since target guns seldom have safeties, it never made it to the 55 model, as far as I know. If anyone knows differently, I would be happy to be enlightened. 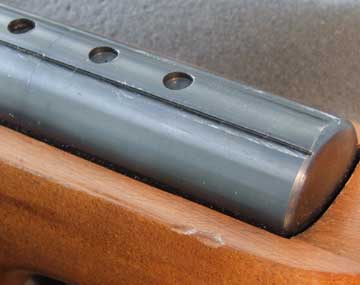 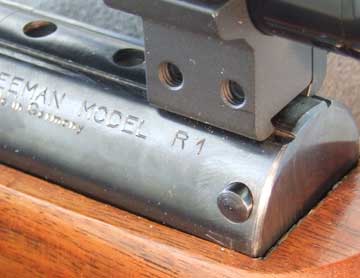 This Beeman R1 has a safety button. Incidentally, this is the R1 that was the star of the book.

The Weihrauch safety is a spring-loaded pin that jumps into position when the rifle is cocked. If you want to reapply it after taking it off you have to break the barrel again–on the cocked rifle–so the piston rod can press the trigger parts out of the way, once more. Eliminating the safety does nothing to the function of the trigger, which remains a modular unit. But what it does do is remove one additional step a competitor has to remember while shooting a match. However, the 55 adds another step of its own, in the form of the breech lock lever, so it’s really a wash. R1 owners get so used to releasing the safety that they never give it a second thought, anyhow.

Separate the action from the stock
The 55 has an articulated 2-piece cocking linkage, which means there is a steel bridge under the spring tube that the linkage passes through. That also means that instead of 2 forearm screws–one of either side of the gun–there’s just a single screw in the bottom of the forearm that screws into a threaded bushing in the steel receiver bridge. HOWEVER–important tip–instead of just the front triggerguard screw holding the triggerguard and therefore the stock to the action – BOTH the front and rear screws hold the rifle together. The rear triggerguard screw actually threads into a nut held captive by the trigger housing. So, it still takes the removal of three screws to separate the stock and action. 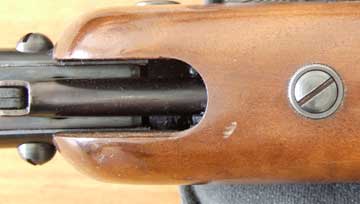 Only a single forearm screw and a short cocking slot are features of an articulated cocking link. 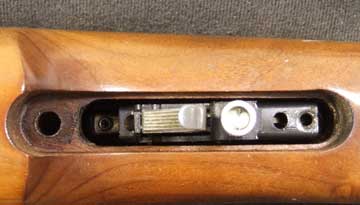 On the 55, both triggerguard screws hold the rifle in the stock. The front screw fits into a boss on the spring tube. The rear screw fits into the rear of the trigger housing. That’s the last hole on the right in this picture.

Remove the trigger
To remove the Rekord trigger, drift the two crosspins from left to right. Drift the front pin first and install it last during assembly. I will explain the special assembly procedure when we get to it. Once the trigger was out, I saw a strange and somewhat disturbing thing. It was still greased from the Weihrauch factory with what I call “tractor grease.” Once you’ve seen this stuff, you’ll never forget it. It’s a clear sign the trigger has never been touched, but the mainspring that I can now see is coated with black tar. Who removes a mainspring and coats it with tar but fails to clean and adjust a Rekord trigger? There’s an obvious answer to that, but I held my opinion until the mainspring was out. 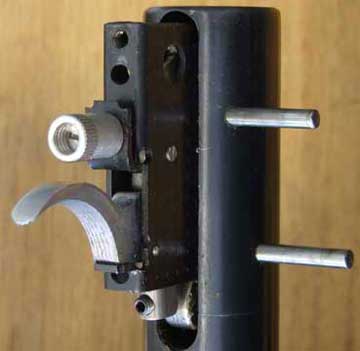 Drift out the 2 crosspins that hold the trigger to the rifle. 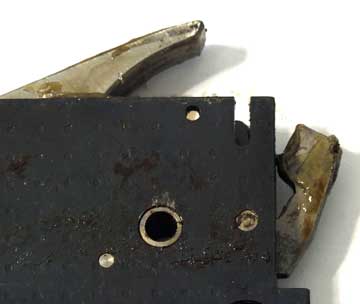 The thick transparent brown grease that covers the trigger parts is a telltail factory sign. This trigger has never been cleaned or adjusted since new.

Remove the end cap
Once the trigger has been removed, there is a huge hole in the end cap. To get the threads started I insert the smooth end of a medium-sized crescent wrench into the hole and strike it on the the other end with a hammer to start the threads turning. It only takes two or three strikes on the wrench before the end cap can be unscrewed by hand. The smooth rounded end of the wrench ensures there will be no marks left on the sharp edges of the trigger slot.

Once the trigger is out, there is a deep slot where it was housed. The smooth rounded end of a 10-12-inch crescent wrench can be inserted in this slot and used as leverage to turn the end cap.

The end cap is threaded into the spring tube.

As you can see, the end cap simply unscrews from the spring tube. When the threads get near the end, I place the muzzle on a piece of wide leather (the inside of my sandal works for this) so the whole rifle can rotate while I hold the end cap still and exert downward pressure. When the threads end, the cap springs up with about one inch of spring tension, which is 30-40 lbs. of effort. I’m not using a mainspring compressor with this gun. I’ve always done it this way with the smaller Weihrauchs, and I know that other airgunsmiths do the same. If you don’t know what you’re doing, use a compressor.

The mainspring will now pull out. Once I have it in hand, my suspicions are confirmed. It’s canted. That means this gun was not tuned by a professional. It has what is known as a redneck tune. Someone put black tar on the bent spring to calm the gun. It’s like a politician paying hush money to cover his tracks instead of solving the problem. This spring will not be going back into this rifle. 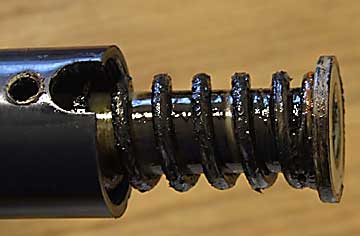 This is the correct amount of black tar for a mainspring.

And there’s a problem. A canted mainspring will make the gun buzz and produce less power. The last person inside the gun used black tar to quiet the buzz instead of replacing the spring with a good one. That may be where the dragging cocking link came from.

I’m going to stop here because this has become a lengthy process. Next time, I’ll complete the teardown.