Today we’ll look at my .177 Diana model 27 rifle after the piston seal and breech seal have been soaked in oil. I told you I put petroleum oil down the air transfer port because my gun is a low-powered springer with leather seals. Leather seals need lots of oil to keep them fresh and pliable, and a low-powered springer doesn’t generate enough compression to detonate the oil. So, petroleum-based oil is fine for guns on this category.

The way to know for certain that you’ve oiled the piston seal enough is to move the barrel through the first few inches of cocking and then relax it. Do that several times and listen carefully to the air transfer port. When you can hear a slurping sound coming from the port, the piston seal is soaked with enough oil to rejuvenate it.

My .22-caliber model 27 that I tuned about 10 years ago with lithium grease on the mainspring still slurps when I test it, despite never having been re-oiled all that time. The excess lithium grease has soaked the seal from the back, making that tune a very long lasting one. However, I did use so much grease on the spring that I gave up some power with that rifle. I think when I tune this one I’ll use black tar grease on the mainspring and oil the piston seal conventionally.

When I oiled the leather breech seal on this 27, it started to disintegrate. I took a closeup photo to show you what that looks like. This seal doesn’t look too good to me, but looks can be deceiving. The chronograph test should tell us for certain if the seal still works. I cannot feel a blast of air coming from the breech joint when the rifle fires, which is one test for an air leak. But a chronograph test should be conclusive. 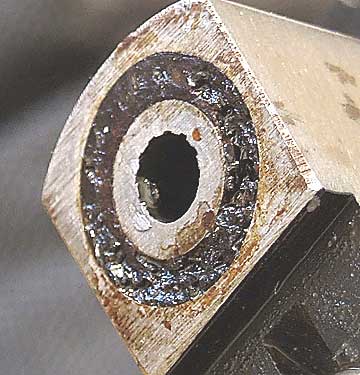 You can see the disintegration of the breech seal in this photo. Bits of leather are sloughing off, leaving pits where there should be a raised surface. An oil spray can be seen rising from the breech with every shot. Even though I can’t feel anything, that oil spray confirms the fact that the breech seal is shot.

I also felt the barrel on this rifle deserved to be cleaned with J-B Non-Embedding Bore Cleaning Compound. Even though the velocity is not high enough for leading to be a problem with any pellet, we don’t know the history of this rifle. If there’s anything in the bore that could hurt velocity or accuracy (probably accuracy more than velocity), I want to clear it out. We’ll start with a fresh new bore.

The bore seemed easy to clean, and there’s a definite choke at the muzzle end. The breech was very dirty. After cleaning, all pellets loaded easier than they did during the first test. Now, let’s see how the velocity is affected after oiling both the piston seal and the breech seal.

Eley Wasps
Before oiling Wasps averaged 444 f.p.s. After oiling and some sloughing of the breech seal, the average is 225 f.p.s. The breech seal is visibly leaking.

RWS Basic
RWS Basic pellets had averaged around 475 f.p;.s. before (they were very bi-modal, so I recorded two averages) and 212 f.p.s. after. The breech seal has failed.

Crosman Premier 7.9-grain pellets averaged 580 before and 321 after. In fact, only RWS Superdomes held anywhere close to their former average of 412 f.p.s., coming in close at 393 f.p.s.

Well, that wasn’t a very big surprise, given the shape of the breech seal. The big question now is what does the piston seal look like. In my experience, leather breech seals fail sooner than piston seals, but we’ll have to tear the rifle apart to know for sure.

The firing behavior has become rougher, which is the piston slamming into the end of the compression chamber because the air is leaking so badly at the breech. I hope I can save the piston seal, but a new breech seal is mandatory.

I adjusted the trigger, which is the rear screw only. The front screw is just a locking screw, and the rear screw controls how crisp and light the trigger pull is. I screwed it down pretty far, which made the second-stage pull very crisp. The drawback is a longer first-stage pull, but there’s no way around it if you want a crisp second stage. 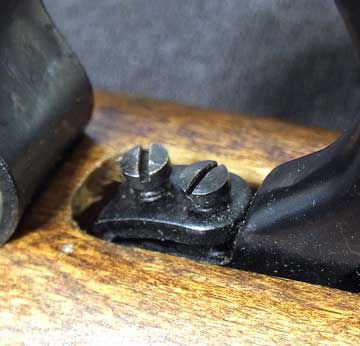 This photo is worth a lot to vintage Diana owners. The rear screw (at right) is down nearly all the way, and the front screw is tight. This gives a model 27 a crisp two-stage pull.

The next report will be either a disassembly of the powerplant or the repair of the breech seal, whichever comes first.