It’s too cold to shoot CO2 outdoors, so the accuracy test of the Crosman 1088 is postponed until we get some warmer days. So, I thought I’d clean up a couple of jobs that I’m working on and show them to you as I go. First, I removed the leather breech seal from the Diana 27 rifle.

Derrick found an inexpensive set of leather punches for me at Harbor Freight, so I ordered them to use in the Diana 27 breech seal project instead of just carving the seal from a leather belt with a sharp knife. There are nine graduated punches in the set for less than $5, so even with shipping I figured it was well worth the investment. I’ll probably have to trim the seal to final size, but the punches will get me most of the way there.

Today I decided to remove the old seal for you, so you can see what the job looks like. Several months ago, I bought a set of dental picks to use on the Walther Falcon Hunter breech seal I replaced during that test series, and they worked well for this seal, as well. 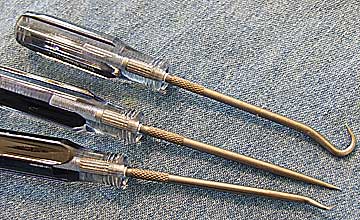 These picks were inexpensive, and they make handling breech seals easy. On this job, I had to break the seal into pieces and scrape it out of the channel.

Old seal was brittle
The old seal came out in chunks instead of a whole seal. That happens only
when the leather has lost all its sealing properties and has transformed into a waxy mass of dark stuff. It should have hung together, but the leather was shot. That happens when there’s no lubrication for a long time–maybe decades. 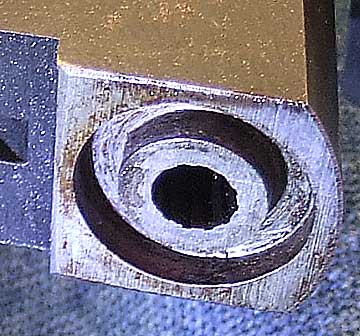 When the old leather seal is completely removed from the Diana 27 breech, you can see the groove the new seal must fit. This photo is like an Escher print until you decode it in your mind. We’re looking at a breech that’s pointing up–away from us. The groove for the seal is wide and flat and there is a stub of the barrel in the middle. Notice that this shot shows more of the rifling, though a couple lands and grooves at 9 o’clock are invisible.

Weihrauch breech seal possible
Just for fun, I pressed a Weihrauch synthetic breech seal into the groove and it fit. It’s about double the height it has to be for this gun, so I would have to divide it in half before installing, but I think it would work. But I want to try to fit a new leather seal to keep the rifle looking vintage.

I cleaned out the breech seal groove with the picks, so the groove is fresh for a new seal. A toothbrush was used to remove the smaller pieces of disintegrated leather.

That project is now on hold until the punches arrive, so I shifted over to the Career Infinity project. You’ll remember that I replaced the inlet seal on my test gun, but then that seal started leaking, too. Boris made a Teflon seal to replace the brass seal holder in the gun. 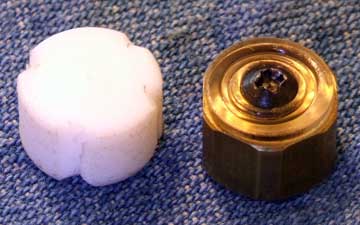 Boris made the Teflon inlet seal on the left to replace the three-part inlet seal assembly that came with the rifle. Less mass may keep the seal from deforming too much.

The new seal is lighter and moves very smoothly inside the valve body. Being Teflon, it’ll deform and take the exact shape of the valve seat. Hopefully, that’ll fix the problem of the inlet valve dumping all the air after a fill.

When I filled the gun it held perfectly, but it also did that after the last seal replacement. The proof of the fix will be if the seal continues to hold after repeated fills, which I will be doing as we move into the velocity part of the test. Boris thought that the Teflon seal would be so light that it wouldn’t get pushed out of shape like the brass carrier did to the factory seal. We shall see!