This final blog of 2008 was inspired by several questions from reader Kevin but also from other readers who are now owners of precharged pneumatic (PCP) airguns. I’ve written these things before, but perhaps never put them in the same order as I will today.

A PCP valve operates best between a certain high and low pressure point. That is to say the valve will open and remain open long enough to pass air from the reservoir to power a pellet to more or less the same velocity. When the reservoir pressure is high, it acts on the valve to close it faster, but the air that passes through the valve when the gun fires is under a lot of pressure. As you continue to shoot and the reservoir pressure drops, it acts with less force and less quickly on the valve to close it, so the valve remains open slightly longer. The air that passes through the valve before it closes is not pressurized as high; but since the valve remains open slightly longer, it delivers similar acceleration to the pellet. The result is that the pellet stays at the same velocity, more or less, throughout a number of shots.

As a gun that has been over-pressurized is fired, it loses some pressure with each shot. The pellets will come out progressively faster as the pressure drops, and you can actually record this if you have a chronograph. Then, at some point the velocity seems to stabilize at a level of similar velocities for several shots. That area is the right pressure for your valve and therefore for your gun. We call that area the power curve because it represents the place within the whole pressure curve (zero psi to the maximum fill pressure) at which the rifle operates the best–and also at the same power (more or less).

As you continue to shoot and the pressure in the air reservoir drops below the ideal operating pressure, the velocity of the pellets starts dropping below the ideal range. The decline can be either a straight decline with each new shot or the velocity can go up and down, but it’s always headed in a general downward direction. A powerful gun like the Career Infinity will usually drop velocity straight down with every shot when it falls off the power curve, while a less powerful gun like a
Benjamin Discovery may have velocities that go up and down; but the general direction will always be down from the ideal level (the power curve).

So, with yesterday’s 12-shot string that was continually declining with each new shot, I concluded that the rifle was coming down off the optimum power curve–a curve that would have been even higher than the 3,300 psi I put into the reservoir at the beginning. That’s why I said this in yesterday’s blog:

It seems as if the gun’s maximum fill is still higher than 3,300 psi, but I don’t have the pressure to go there. Nor do I think I would if I could. I’ve seen the walls of the reservoir, and they aren’t that thick. I recommend you do not overfill this rifle, because I don’t think there’s a large margin of safety. I did it to demonstrate that the valve was not yet on the power curve.

Do you understand? My last sentence, “I did it to demonstrate that the valve was not yet on the power curve” refers to pressurizing the reservoir to 3,300 psi after testing the rifle at 3,000 psi. Since each shot declined in velocity with a 3,000 psi fill, I boosted the pressure to demonstrate that the velocity would go even higher. I’d hoped the first couple of shots would be close to the same velocity with the 3,300 psi fill, but you can see that they’re not. Of course, that’s not to say that 3,300 psi isn’t the exact point at which the rifle drops off the power curve, and if I had pressurized the rifle to 3,400 psi I might have gotten those few close shots I was looking for. We’ll never know, because I don’t feel confident pressurizing this rifle any higher.

Kevin also asked why I said this–“the valve cannot function with pellets this heavy.” I was referring to some guns that will never have a power curve with pellets over a certain weight. You didn’t notice it because I didn’t report the shot strings. When I went to the lighter pellets, I got some shots of similar velocities. That was with the power wheel set on the lowest power setting. The rifle is very clearly on the power curve with lighter pellets and a lower power setting.

Kevin asked what I meant by a “broad flat spot on a power curve.” In this case, my answer looks better as a picture: 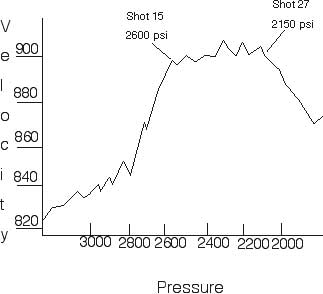 This is a typical velocity-over-pressure chart for a PCP. You get this by chronographing all the shots in a fill. If they look like this, you’ve captured the power curve, which begins at shot 15 (2600 psi) and ends at shot 27 (2150 psi). Filling this gun beyond 2650 psi is a waste of air, as is shooting after the 13th shot.
And, Kevin–every pressure above 2650 psi with this particular airgun is entering into valve lock.

Now you know it all! 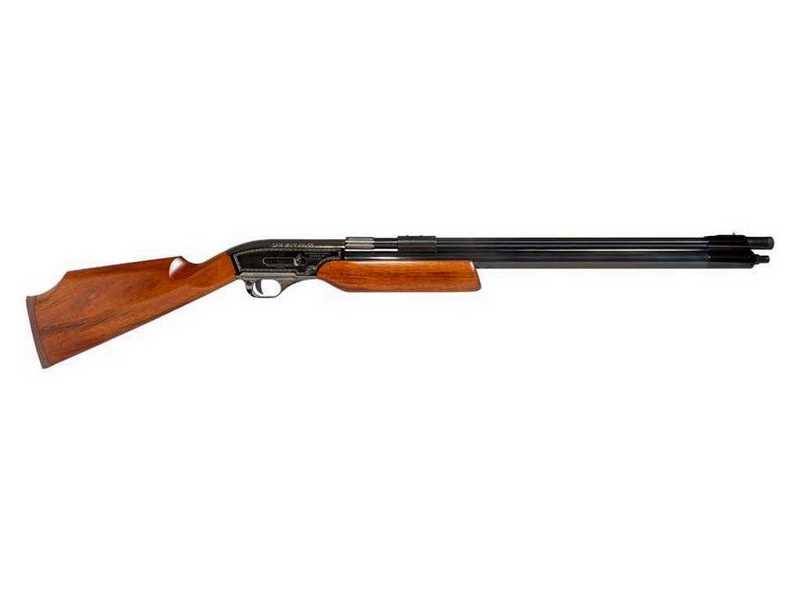 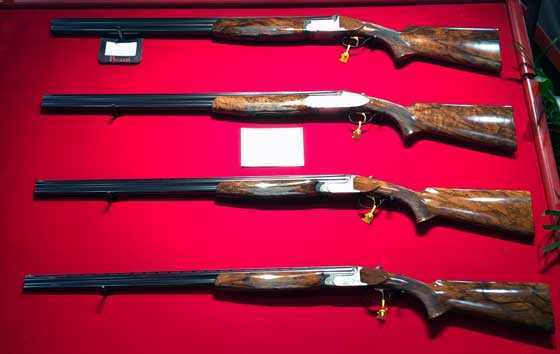