Before we begin I want to announce a new article on the Pyramyd Air website, plus the March podcast is up (including a link to download an mp3).

Today, we’ll look at the carbine’s accuracy. As I reported last time, I’ve never tested this carbine before, so I’m finding out all of this at the same time you are. The Crosman M1 Carbine I tested for The Airgun Letter was a wooden-stocked gun I owned long ago. It was less powerful than this one, and I hope less accurate, to boot!

But that turned out not to be the case. While it’s more powerful, the accuracy of this gun is just about the same as the older one. There was, however, one BB that out-shot the others in this test. Before we get to that, though, how about a report on the shootability of the gun?

Trigger
This gun has a single-stage trigger, and all the guns I’ve shot felt the same. The trigger releases crisply after a moderate pull, but the thin blade does make it feel heavier than the 4 lbs. that it is. Sometimes, Crosman triggers need shims on either side of the trigger blade to cut down on wobble, but this one doesn’t.

Firing
The gun fires with a quiet pulse. It’s almost silent outdoors. The impact of the BB is much louder than the firing noise.

Sights
Crosman copied the later carbine sights that are fully adjustable, and the BB gun sights are, as well. The aperture hole is too large for precision. If you want better results, it would be the place to begin.

Let’s move on to the accuracy test and learn which BB is the most accurate.

Crosman Copperheads
Well, it wasn’t Crosman Copperheads! They went all over the place, as I thought they might, from the results of the velocity test. I remember measuring them a while back and found them to be the smallest of the popular BB brands, as well as the most irregular. The average group size in this gun at 20 feet, rested, was 2.625″. Not a bragging group. 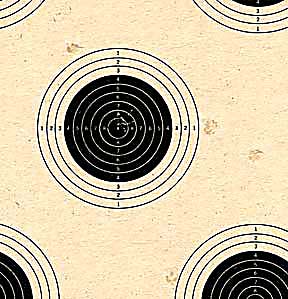 Five Crosman Copperhead BBs from 20 feet, rested. One BB went almost through the center of the bull, and another is very low on the paper.

Avanti Precision Ground Shot
Avanti Precision Ground Shot was the most uniform BB during the velocity test, and several of you thought it would be the accuracy champ as well. But it didn’t happen. Not only was it not the best BB, it was very consistently not the best BB. That last statement may take some explaining. The Avanti posted group sizes from 1.9″ to 2.75″ at 20 feet, rested. Try though I might, I could not get it to shoot better. If I hadn’t tried the next BB, I would have thought this performance was okay, but it wasn’t, as things turned out. 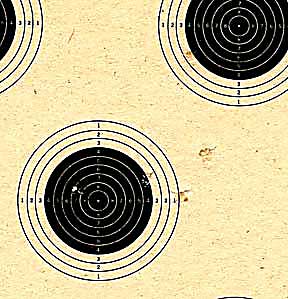 One Avanti BB is close to the center of the bull and one is at 7 o’clock, just outside the bull at the upper right. This is the best Avanti group, and it’s just under two inches. 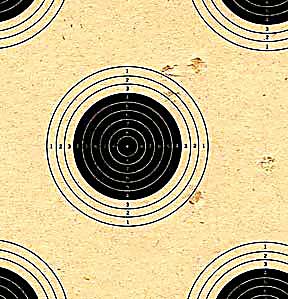 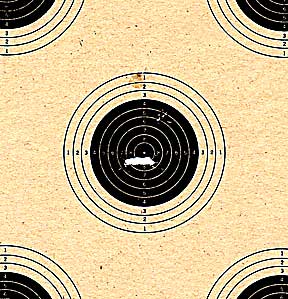 The best Daisy Premium group is less than one inch at 20 feet. Three together in the center of the bull and two above that. One is in the white at 12 o’clock. This isn’t representative of what the gun can do, but it does show that it likes this BB best.

I did remember to twist the barrel after cocking, so the sights were always in the same position for every shot. The Crosman M1 Carbine is simply not a precision BB gun–any more than the M1 Carbine is a precision centerfire rifle. Crosman copied that feature, too.

But nobody ever claimed that this was a gun for the International BB Gun Championships. Leave that to the 499. This is a fun gun, pure and simple. It’s a can-roller and a blaster of plastic army men. For that roll, it’s ideally suited. 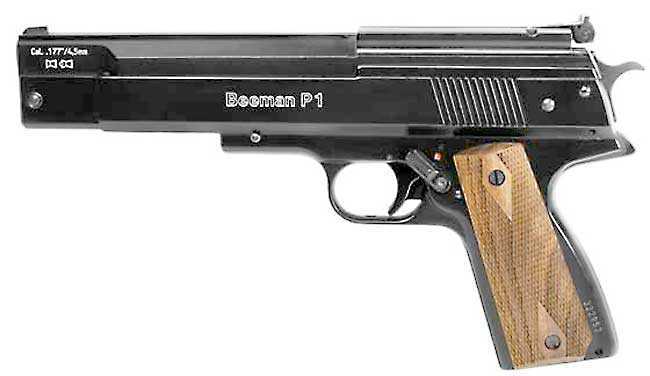