We’re mixing it up with this report. Since everybody wanted to see accuracy, I promised it for today. As I said at the end of the last report, accuracy is a barrel thing. I wanted to present it separately, because it deserves a report of its own. But, first, I want to amend something I said about the free-floated barrel.

It is free-floated, but when the muzzle cap is tightened down all the way, it presses the four chambers back into the muzzle of the barrel, which you will remember is an enlarged flat platform. That action locks the barrel and shroud together so they move as a single piece.When that happens, the barrel AND shroud are both free-floating. That allows the barrel to maintain alignment with the holes in the end of each of the chambers and with the hole in the muzzle cap. If the pellet were to touch any of the side of those holes, it would be flipped wild and away from the group. You will see that it works as designed.

I thank Ray Apelles for clearing that up for me. Ray and his father, Hans, worked on the Marauder as it was being tested by Crosman, and he has had his rifle apart literally hundreds of times, so he understands its inner workings very well.

An early challenge
At the start of accuracy testing, I discovered that the gun wasn’t grouping well in the beginning of the charge. But after 20 shots it settled down and started grouping very well. Remember, I was shooting at 50 yards, which always shows things like this immediately. From that description, what do you suppose was happening?

Are you starting to develop a sense of how PCPs operate? If so, you may have guessed correctly that my rifle was in valve lock after the fill and had to be shot some until the reservoir pressure dropped into the range at which the valve was working.

Now the Crosman factory had set up this rifle for a 3,000 psi fill, per my wishes. And I filled it to 3,000 psi–EXACTLY. What is happening?

My pressure gauge and Crosman’s pressure gauge do not agree. That’s what’s happening. Here’s the interesting thing. Both Crosman and I use identical 88 cubic-foot Airhog carbon fiber tanks with the same fill gauge. But they disagree by about 500 psi! While that’s a lot, I have seen almost as much when I worked at the AirForce Airguns factory. And Ray Apelles has two gauges that disagree by 400 psi, so this isn’t an isolated incident.

I discovered that my rifle wants to be filled no higher than the 2,500 psi mark on my gauge, and then it’s on the power curve from the start. Once I learned that, the real accuracy testing began. 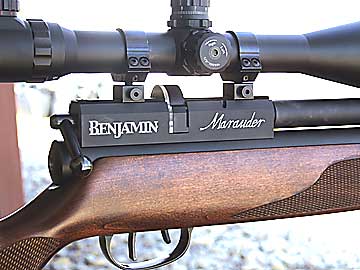 I have to give the CenterPoint 8-32×56 scope high marks in this test. It was crystal clear, despite the day being misty. Notice that I had to crank up the rear B-Square adjustable mount higher than the front to compensate for barrel droop. In this case, it’s no doubt due to the barrel being free-floated.

I started the test with the 10.5-grain Crosman Premier pellet because that seemed to be the best pellet for the rifle. If it were a springer, I’d go with the 7.9-grain Premier. Always choose the heaviest pellet for a pneumatic or CO2 gun. 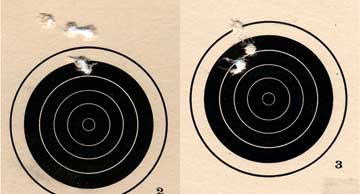 The left target was the first one I shot at 50 yards, after discovering the proper fill pressure. It measures 0.626″ c-t-c. The target on the right was the second target I shot and also the best of the day. It measures 0.436″ c-t-c. 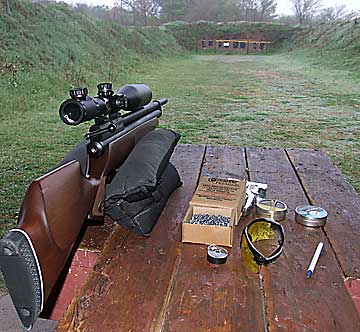 It was a dark and stormy day! I had the range to myself. Testing the Marauder at 50 yards.

After a dozen tight groups, I switched off to Beeman Kodiaks, Air Arms domes and JSB Exacts. None of them shot as well as the heavy Premiers, so I switched back. 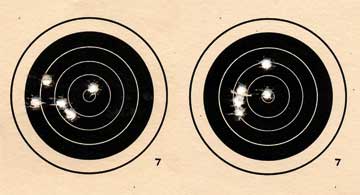 In all, I shot 20 groups with the Marauder at 50 yards on this day. The best was 0.436″ and the worst was 0.651″. The average would have been around six-tenths of an inch. As you can imagine, that’s not only very consistent performance, but it gave me confidence in the rifle when shooting this pellet. It is the reason I told several of you to wait a bit before buying that PCP you wanted, because you wanted accuracy above everything.

I’ve shot other PCPs that did as well as the Marauder. And I’ve shot tighter individual groups at 50 yards with some of those guns. In fact, I shot one tighter group with a .22-caliber Benjamin Discovery. However, the Discovery could not maintain the average level of consistency the Marauder does. I believe that if I keep shooting this rifle, I’ll probably wind up with an all-time record tight group.

This level of accuracy doesn’t come by accident. While the other precharged rifles I’ve shot have given me some bragging groups, I can’t remember one besides the USFT that was as consistent as this one. It’s the kind of rifle that hits the mark every time–with no excuses!