Daisy’s 853 target rifle has been an icon in youth target programs for the better part of 30 years. As an inexpensive 10-meter rifle, it has long represented the ground floor, but for causal shooters it is a bit pricey. However, Daisy also offers essentially the same gun as the Powerline 953 TargetPro with none of the frills and without the Lothar Walther barrel for just a fraction of the cost of the vetted target rifle. For the casual target shooter and plinker, it’s a price that cannot be overlooked

General description
The 953 is a single-stroke pneumatic rifle that can function as a single-shot and as a five-shot repeater–it’s your choice. I will show you how to convert the rifle from repeater to single-shot in a future report. You must switch from the single-shot loading platform to the five-shot magazine, which is quick and simple to do. The magazine indexes automatically each time you pull the bolt back to cock the gun and, when the last pellet is fired, the bolt is blocked from going forward, signaling the need to reload.

The rifle is available in .177 caliber only and buyers should know there are no possibilities to increase the power. Be prepared to accept plinking velocities around 525-550 f.p.s.

Trigger
The trigger is perhaps the weakest part of the gun, but it’s no worse than the trigger on the 853. It’s called a two-stage trigger, but in my opinion it’s really a single-stage with a long, creepy pull. It releases at just under 5 lbs. on the test rifle, but shows signs of breaking in to a lower-effort pull. Well-used rifles are often breaking below 4 lbs. and coaches all over American are able to adjust it to break at less 2 lbs. with less creep. The instructions are all over the internet. Any reader who has tuned their 953 trigger is welcome to chime in here.

This trigger is non-adjustable by design. Competition rules require a 1.5-lb. pull and rifles are tested at every competition, where a cocked trigger must lift a 1.5-lb. weight. There’s a manual safety located in the triggerguard, which is the best of all worlds.

Sights
The sights are fully adjustable fiberoptic open sights, which to my thinking are the most inappropriate sights this rifle could have. But if you view it as a pure plinker instead of a target rifle, I guess they’re okay. However, they come off easily and better sights can be installed in their place, which I plan on doing. A small scope is also possible, as is a red dot.

Stock
You have to love the stock! It’s shaped as an offhand stock with a vertical pistol grip and a very high butt and Monte Carlo comb. The forearm is flat on the bottom, but the pump handle precludes any accessory rail. It’s perfect for offhand work, which plinkers do as much as target shooters.

The stock is made from a dark synthetic. It is dense and adds some weight so the rifle doesn’t feel like a kid’s gun. It hefts like a lightweight adult rifle, and most adults will like the feel and balance.

The pump handle is metal and swings easier than the ones I remember on new 853s. Keep the felt washer and o-ring on the pump head lubricated with either Crosman Pellgunoil or the “clean motor oil” Daisy recommends for wiping down the outside of the gun (!) and the inside of the barrel. My only comment here comes from 20 years of having Pellgunoil (from Crosman) and 20-weight non-detergent motor oil (from Daisy) drilled into me. I guess modern synthetic seals can take almost anything, so just follow the instructions. Pennzoil will work, apparently.

The rifle is cocked by pulling straight back on the plastic cocking handle on the right side of the action. The location of the handle and loading tray favors right-handed shooters, but the rest of the stock and trigger are ambidextrous.

The barrel looks spindly, but bear in mind the powerplant has zero vibration. It’s plenty stiff to handle the load asked of it. And, from what some of our readers have said, it’s a good one.

As for ruggedness and longevity, this same action in the 853 has endured hundreds of thousands of shots and rough handling by hundreds of shooters. These are the club guns that everyone uses and no one but the coaches care for. The seals (o-rings) have to be replaced periodically, but that’s about it.

I’m going to test this rifle normally, then I will try a few sight options and maybe some other things. So, settle in for a long, thorough test. 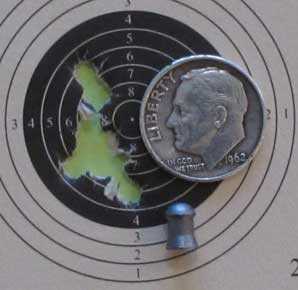